So, Justin, when are we getting that back rub? 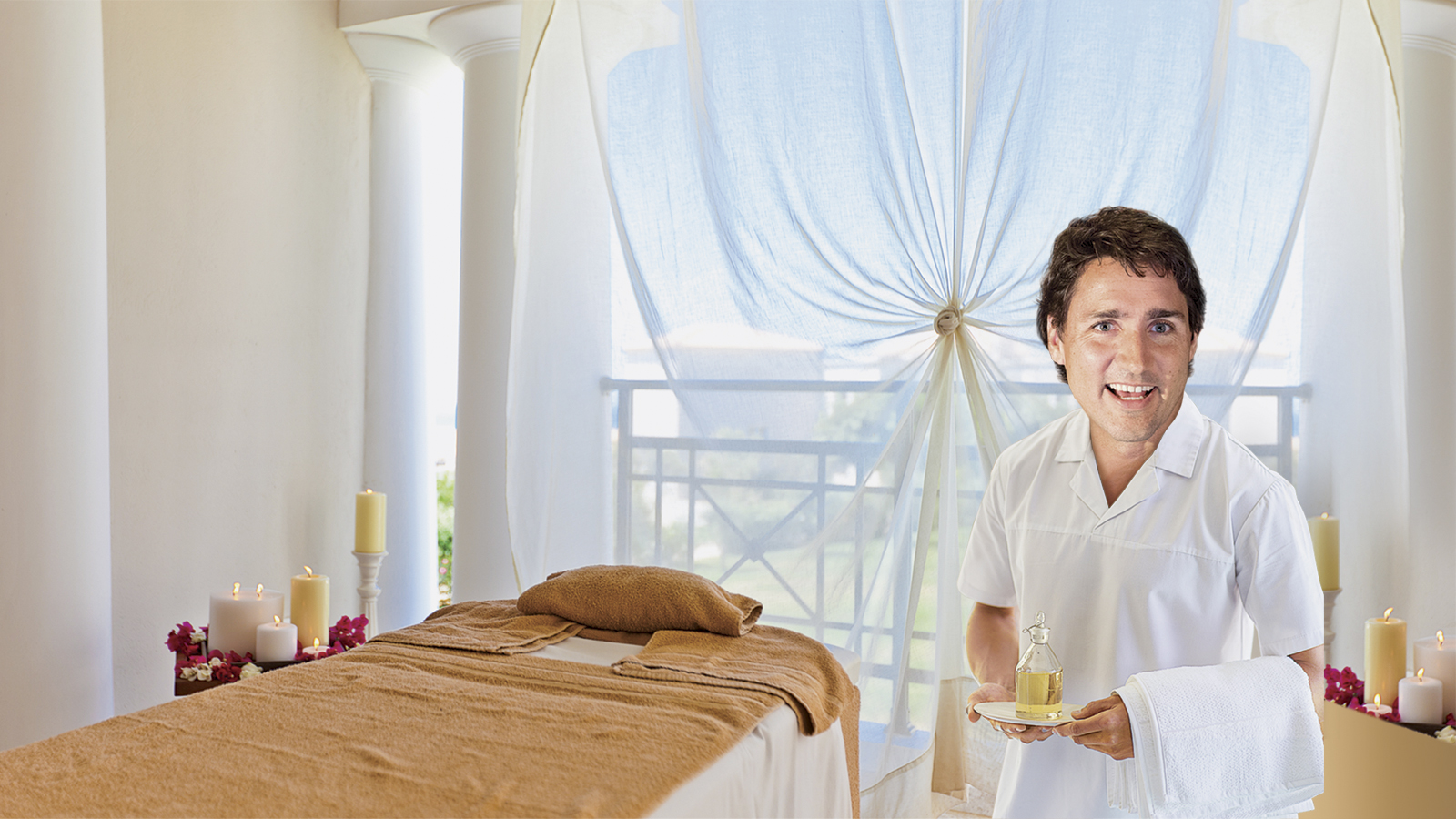 Only a year remains until the next federal election campaign—and each of the parties has been test-driving a slogan designed to increase its appeal. Let’s take a closer look:

New Democrats: “Change That’s Ready.” The NDP has had enough of being ignored, OK? They’re the official Opposition! They’ve got close to 100 seats in the House! Their leader offers Canadians the intelligence of an academic and the beard of a guitar teacher! And yet the media and the public pay far more attention to He Whose Hair Must Not Be Mussed.

The party’s new slogan attempts to position Thomas Mulcair as the most prepared alternative to Stephen Harper. It is being reinforced by Mulcair’s own musings in the public realm. Most recently, he’s been heard accusing his Liberal rival of having no policies, no solutions and no ideas—to which an irate Justin Trudeau has replied: [winks and offers Canada a back rub].

I’m kidding, of course. Trudeau actually has a whole bunch of policies. Would you be interested in hearing about them during your back rub, Canada?

It’s important to understand something else about the NDP: They are about more than slogans. They are also about trying to coax us into referring to their leader as Tom Mulcair. It’s always Tom this and Tom that. They’re trying so hard to make their leader seem relatable that it’s only a matter of time until they play the Tommy card. Hey look, kids: it’s Tommy MC! The ensuing ad is almost certain to include a puppy, two selfies and a hacky sack.

The impulse is understandable, but let’s face it: He’s just not a Tom. In fact, if there were a more formal version of Thomas, that’s what we’d be calling Thomas Mulcair. There’d be people across Canada saying: “Sure, I like the NDP’s message—but I just can’t connect with Thomaseth.”

Conservatives: “Better Off With Harper.” Strategically, this slogan aligns with the party’s longstanding argument that Canada is a great country and an enviable economic power that would immediately collapse into chaos and return to the barter system should Stephen Harper be defeated.

But the casual use of the Prime Minister’s surname is a little strange, no? Do you think there’s a single Conservative staffer who refers to the PM as “Harper?” I bet that even in their dreams, they address him as “Sir,” “Mr. Prime Minister” or “Stephen of the House Harper, first of his name.” (Game of Thrones-themed dreams only.)

Plus, it is perhaps worthy of mention that the expression “better off with” is most frequently used in reference to the choice between two unpalatable options: Well, last time, the burritos gave me the runs, so I guess I’m better off with the enchiladas. Not exactly an image to rally a political base.

Then again, the Conservatives are raising enough money that they’re on the verge of moving beyond the need for slogans. Give the poindexters at Conservative Labs another few months and they’ll be able to beam Harper talking points directly into our subconscious—like a U2 album into our iTunes. One day, we’ll just wake up with unfamiliar new opinions about the unemployed and corduroy.

Liberals: “Justin Trudeau—Getting Ready to Lead.” There are two ways to read this slogan. Here’s one way: “A confident Trudeau fully expects to become PM and is preparing tirelessly to bring real change to Canada.” Many, however, have been reading it the other way: “Justin Trudeau is not currently ready to lead—but he’s totally going to buckle down and possibly go to night school. Check back with us in a few months, OK?”

Under this interpretation, the slogan leaves unanswered the question of how long “getting ready” will take. Will Trudeau study on weekends? Will he enlist a cool mentor like Mr. Miyagi or Patches O’Houlihan? Is there a climactic test of some kind like in the Harry Potter books? Only after you navigate the Hedge Maze of Legislative Procedure shall you truly be ready to lead, my child.

That said, there are signs that Trudeau is getting a little closer to being ready. One recent ad included a photo of him sitting at a desk looking all leader-like and doing some paperwork. It was probably just a receipt so we can all file a workplace insurance claim for that back rub, but it’s a start.

Scott Feschuk’s new book, The Future and Why We Should Avoid It, comes out in October and is available for pre-order here and here.