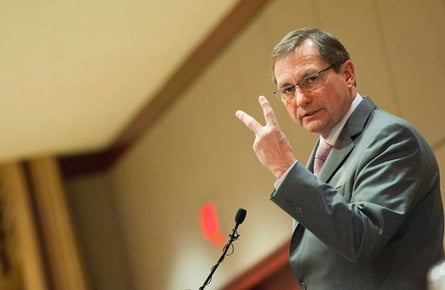 Some of you will be reading my column on the resignation of Ed Stelmach as Alberta premier as early as today; some of you will have to wait until next week. In the meantime, I’ll give you some principles you can use to filter the hypotheses of other observers.

First of all, don’t believe anyone who tells you that Alberta politics is governed by some mystical tidal pattern of stagnation punctuated by revolution. Anybody who’s been here for the past 20 or 30 years should have learned to tune out the “massive change is just around the corner!” refrain by now, if only because advancing age has made him half-deaf. Preston Manning alone has been guilty of a dozen or so end-times prophecies of this sort (though, in fairness, prophecy is sort of a family tradition with him). News flash: pretty much everybody who voted here in 1935 is underground, and not because a basement suite was all they could afford. The Alberta electorate of 2011 in no way resembles that even of 1981; not ethnically, not culturally, not spiritually, not ideologically.

And the political spectrum itself has changed. As much as there might be a casual longing for a revival of “Peter Lougheed Conservatism”, Lougheed’s style of state corporatism, which led to budget disaster in the 1980s after his suspiciously timely exit, would probably now put any candidate who embraced it on the left wing of the federal NDP. Don’t believe anyone who tells you there is some unexploited, powerful hidden welter of Red Toryism in Alberta, waiting to spew forth into an appropriate channel. Even the reds aren’t that Red anymore.

There is no particular reason for Alberta politics to seek the same equilibrium in which our federal government is trapped, so don’t believe anyone who argues for realignment as some kind of cosmic axiom. Yes, I’m looking at Jeffrey Simpson here. Simpson is described endearingly by his employer as “a regular visitor to Alberta”, which seems like a deliberate invitation to scorn, but the man obviously is well-informed about the place. His characterization of the Alberta Liberal Party can only have come from someone familiar with it.

Simpson, however, believes Alberta politics is reverting to a “normal” shape (one it has never had) because the province no longer has any reason for hostility and suspicion toward a federal government led by a Calgarian. (With the bonus, one presumes, of a chief justice from Pincher Creek.) I think our visitor underestimates the ease of Ottawa-bashing in a world where Alberta farmers can still be jailed for defying the Wheat Board; where Alberta still pays toll upon toll for its presence in Confederation, layering pension and employment-insurance outflows on top of explicit fiscal equalization; where, as finance minister Ted Morton recently pointed out, Albertans are being billed specifically for the provincial sales tax liabilities of Ontarians and British Columbians. Morton’s a smart guy! He can find reasons to be upset with Ottawa almost as fast as Ottawa can come up with ways to screw Alberta!

I would tell you not to believe anyone who sees no difference between Ted Morton and Danielle Smith, but then, you barely have any choice aside from me. My column anticipating a personal tilt between Morton and Smith in the Calgary exurbs has been superseded with embarrassing speed by events, but at least it was written by somebody who can distinguish between various species of “right-winger” if given a pair of field glasses and sent out into the bush. The Morton-Smith personal combat, which already started when Smith announced a candidacy smack-dab in the middle of Morton Country, is more than superficial. Morton, by trifling with property rights as resource minister, has attacked the very principles Smith built her career around. She is physically moving to the rural south because Morton painted a target on himself; his core organizers and financial backers are gone, many directly to her, and they are not coming back. The Globe‘s Josh Wingrove is all over this, and understands it better than most writers for Alberta organs do; he, at least, is no mere visitor.

But, really, is there any realistic doubt that Morton and Smith could stage a pretty interesting political battle? Forget even the intriguing stylistic contrast: one of them has been a rights advocate for her entire career and the other is the country’s leading intellectual opponent of liberal “rights” rhetoric. One of them is pro-choice and pro-gay marriage; the other made his reputation blowing raspberries at the Morgentaler and Vriend decisions. It’s literally not possible that any reasonable person could be equally comfortable with either of the two as premier.

Other myths to be wary of? Don’t believe anybody who talks up the Alberta Party, at least until it has a leader, some policies, and a history of contesting elections. The idea that an Alberta political movement can go from zero to government in 6.8 seconds, just because Social Credit did it 76 years ago, is just a variant of the “every X years Y happens” myth. (Hasn’t anybody in this province read The Poverty of Historicism?) Don’t believe anything you are told about low Alberta voter turnout unless the province’s young-skewing demographics are factored in; young people don’t vote anywhere in the Western world, and we have more of them than you do.

And don’t put too much stock in the election of Naheed Nenshi as mayor of Calgary. What he accomplished was remarkable, but it also required less than 40% of the vote in a race where the establishment favourite, Barb Higgins, turned out to have a bad case of China Syndrome. The people who got giddy over big bad Calgary electing a relatively liberal mayor apparently haven’t heard that the last time Calgary elected a non-Liberal was 1977.