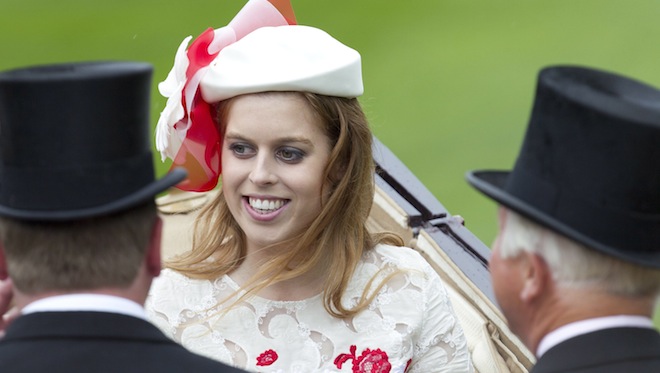 It’s been a frustrating year for Princess Beatrice. Ever since September, when she graduated from Goldsmiths’ College at the University of London with an upper second class history degree, she’s been hunting for a permanent job. It hasn’t been easy—she’s got a bit of a rep as someone very impressed by her own title. Still, most other royals of her generation have knuckled down, gotten jobs and built careers. Look at cousin Zara Phillips, who is going to the Olympics as a former world three-day eventing champion. And that’s a title that’s earned, rather than handed out to anyone with a nice pedigree.

As Beatrice’s search went on and on, and as 2011 turned into 2012 with no announcement forthcoming, gossip grew. By May, the Telegraph ran a story headlined, “How do you solve a problem like Princess Beatrice?” It reported that attempts by her father, Prince Andrew, to get her a big royal gig had been soundly rejected by the Prince of Wales:

There are currently 16 full-time working members of the Royal family but the Prince of Wales is said to favour cutting that number to eight or nine when he becomes king, leaving no room for the likes of Beatrice and Eugenie, or their younger cousins Viscount Severn and Lady Louise Mountbatten-Windsor, when they come of age. So, to misquote Oscar Hammerstein, how do you solve a problem like Beatrice?

Apparently, realizing nothing was going to come her way unless she worked for it, the Princess did some work placements, broadening out from an initial focus on fashion and fine arts. Finally, in late June the Express hinted that Beatrice was about to get a fulltime job: “The Queen’s granddaughter is said to be on the verge of committing to a full-time career in business and finance. Beatrice, 23, has been working at venture capitalist firm Cabot Square Capital, where it is looking increasingly likely she will be offered a job. The company, founded in 1996, invests in “companies supported by strong cash flow and real assets in growing markets”, says its website. A source close to Beatrice revealed: ‘She has set her sights on working in finance. She is very entrepreneurial and wants to go into business, perhaps even running her own business one day.’ ” According to the Mail on Sunday, she’s just got to pass her finance exams before Cabot Square Capitol takes her on permanently.

The push to get her career finally settled could have something to do with a bit of competition from her little sister, Eugenie, who’s already pounding the pavement after her recent graduation from Newcastle University with an art degree. By all accounts, she’s networking like mad to land a job at an auction house.