Opening this week are two films from opposite ends of the cinematic universe. One is massive, the other miniature. Both are baroquely plotted, time-warped dramas set in alien worlds, with meta narratives that hover between comic irony and high drama. One is Star Trek, the blockbuster reboot that seems destined to go where no Star Trek movie has gone before—far beyond its fan base. The other is Adoration, a return to form by Canadian auteur Atom Egoyan, who resumes the intimate, and intricate, scale of his earlier work with an arthouse gem destined to consolidate rather than expand his audience. Star Trek is a popcorn movie that I’d happily recommend to anyone; Adoration is a foie gras film, an acquired taste that will delight Egoyan gourmets and may leave others a little bewildered.

I come to this not as a fan, but as someone who has always viewed Star Trek from a distance as an amusing cult phenomenon. Like anyone else, I’ve cruised in and out of the various TV incarnations, and I’ve seen some (but not all) of the previous ten Star Trek movies, which ranged from laughable to forgettable. If you want a fan’s reaction to the new movie, you should read this report from Patricia Treble, Maclean’s chief of research: Star Trek from a fan’s point of view. But even this non-believer was delighted to ride the refurbished Starship Enterprise. With more than double the budget of any previous Trek movie, director J.J. Abrams (Lost) has rebooted the franchise into a new stratosphere, but he’s brought more than posh production values to the table. Without abandoning the Star Trek of sci-fi kitsch, he’s enriched the saga with unprecedented depth and maturity. And if my enthusiasm is any measure, he has pulled off that tricky balancing act—thrilling loyal fans while appealing to a broader audience of the uninitiated. To read my recent background piece in the magazine about the reboot, go to Star Trek’s perilous enterprise. Meanwhile, some thoughts on the movie, after seeing it last night:

Star Trek, a title that seems naked without Roman numerals attached, relaunches the saga with a new crew of actors playing the characters from the original TV series. Abrams kick-starts the prequel’s creation story, with a prolonged space battle that culminates in a Big Bang Genesis: simultaneously Captain James T. Kirk’s father is sacrificed in a clash with a Romulan ship while his mother gives birth to baby James in an escaping shuttle craft. Right from the get-go, Abrams brings an arresting sense of style to the visuals: the enemy craft, piloted by the Romulan villain Nero (a tattooed Eric Bana), looks like an ominovourous, dark-feathered sea creature. And there’s some flesh-and-blood punch to the violence. This doesn’t feel like a cartoon.

Flash forward to James Kirk in Iowa as a juvenile delinquent joy-riding a vintage red Corvette, then as a brash young man, a rebel without cause, taking on all comers in a barroom brawl. The actor cast as Kirk, Chris Pine, first struck me as a walking cliché of a blond All-American pretty boy, a callow combo of Tab Hunter and James Dean. But as he finds his rhythm, the performance acquires some edges, some wit, and we can see a glimmer of William Shatner’s jaunty signature in his reckless intimations of authority.

As the young Spock—the Vulcan-human halfbreed famous for denying his emotions—the brooding Zachary Quinto (from TV’s Heroes) brings a compelling gravity to the character. He and Pine make a good match. And the slow-burn combustion between these two young men is what fuels the drama, and the comedy. It the old heart-mind duel between Kirk’s gumption and Spock’s genius, but it feels more volatile, as it should in these early stages. As for the rest of the crew, the characters are all quite faithfully molded to the template of the original series, though some are more fleshed out. New Zealand actor Karl Urban (The Lord of the Rings) brings a wry intelligence to Dr. McCoy (“Bones”), and Brit firecracker Simon Pegg (Shawn of the Dead) pops up late in the movie as Scotty, then proceeds to steal every scene he’s in.

Leonard Nimoy, meanwhile, drops in to visit his younger self as a time-travelling sage. It’s a significant appearance, amounting to much more than a cameo. And Canadian Bruce Greenwood makes a meal out of one of the film’s meatiest supporting roles as Capt. Christopher Pike, the mentor who steers young Kirk into his heroic vocation as a Star Fleet commander following in his father’s footsteps. You don’t imagine going to a Star Trek movie for the acting, but Greenwood’s performance here is as sharply nuanced as anything he’s done. And the net effect is to add some ballast of credibility to the whole enterprise: Greenwood helps us take it seriously, at least when it’s meant to be serious.

The line between comedy and drama seems more clearly defined in this Star Trek than in some of the previous incarnations, which are often warped by self-parody. Here the movie funny when it’s supposed to be funny and exciting when it’s supposed to be exciting. Although I’ve never been mad for either Star Trek or Star Wars, and liked to lump them together, I’ve come to appreciate the difference between these two space operas, especially after seeing this movie. Star Wars has always seemed like second-rate Tolkien, which itself is warmed-over Wagner, and I always felt that George Lucas was just recycling an airless, bogus mythology that was consumed with its own importance. But what I came to realize last night is that Star Trek, at its core, is comedy, an sci-fi adventure never takes itself too seriously despite a unshakable pride in its ever-expanding universe. It doesn’t get too overwrought with spiritual or existential aspirations. Sure, it has its operatic moments, especially in the new movie. But even the most bombastic passages, powered by a score of triumphant brass and soaring choirs, maintain a certain elegance. Even the action scenes have a symphonic balance; they don’t exhaust us with overkill.

I suppose in the end I find that I’m simply grateful for an action blockbuster that doesn’t try to blast our senses, and our intelligence, into oblivion. Like Casino Royale, the reboot of the James Bond franchise, Star Trek has remarkable freshness and originality for something so deeply familiar. And it leaves us confidant that a venerable piece of pop culture is in good hands, at least for the time being. 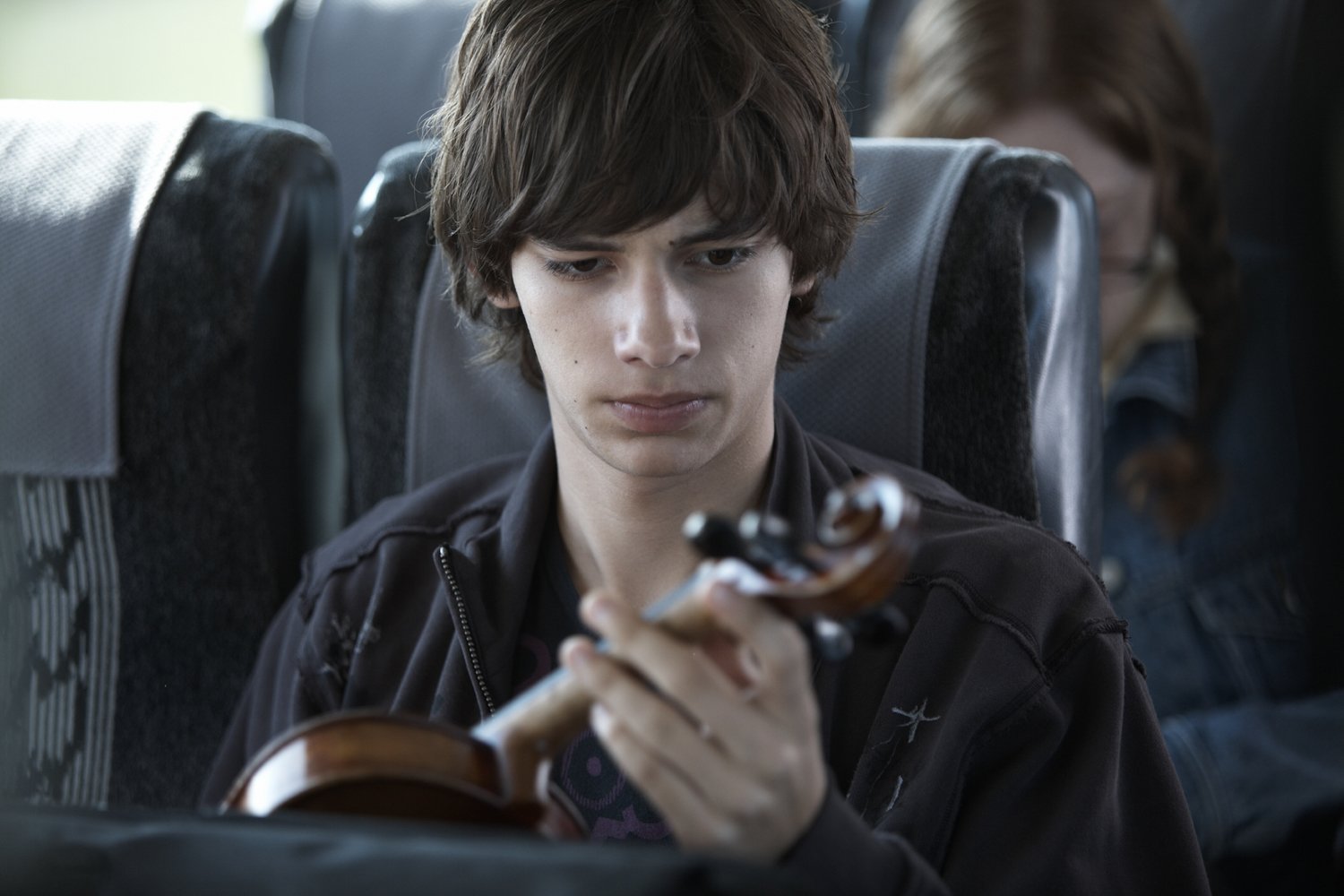 Atom Egoyan recently wrapped finished shooting Chloe with Ghostbuster mogul Ivan Reitman. A remake of a French thriller, it stars Julianne Moore, Amanda Seyfried and Liam Neeson, and it marks a major departure for the Toronto filmmaker—the first movie he’s made from a script that he didn’t write, the first with a linear narrative, and the first with no role for his wife, actress Arsinee Khanjian. (To read my magazine interviews with Egoyan and Reitman on the set of Chloe, and to see a video I shot of them together, go to ‘Odd Couple’) For Egoyan, Chloe marks quite a departure, an experiment with a less experimental style of filmmaking, so to speak. And if Chloe turns out to be a smashing success, we may never get to see a movie like Adoration again.

It’s a classic Egoyan film, an onion-skinned puzzle of misplaced identity that combines downbeat comedy with haunting drama. For the director, it’s a retreat from the ambitious scale of his previous two features, Where the Truth Lies and Ararat, which were both suffocated by their narrative density and thematic complexity. Adoration is pretty complex yarn in its own right—the story is wrapped around a time-warped plot that’s only slightly less far-fetched than the one in Star Wars. But Egoyan is working on a smaller canvas here. And although he’s flirting with some grand themes, he doesn’t seem daunted by them. The tone is brightly perverse and playful. Egoyan is on top of his game and having fun with his characters as only he knows how. To see him and Adoration’s stars talk about his method, go to my video of Egoyan, Scott Speedman, Devon Bostick and Rachel Blanchard at last year’s Cannes film festival

With Adoration, Egoyan once agains hows that he has a gift for working with young actors, and capturing them on the cusp of adulthood. He tapped deep reservoirs of vulnerability in Sarah Polley (Exotica, The Sweet Hereafter), Elaine Cassidy (Felicia’s Journey), and newcomer David Alpay (Ararat). Here he casts a young unknown named Devon Bostick as his lead and a draws a sublimely aware performance from him. Bostick stars as Simon, an orphaned teenager who lost his parents (Noam Jenkins, Rachel Blanchard) in a car crash. In a process that begins with a high-school translation exercise from his unduly devoted French teacher (Khanjian), Simon imagines a scenario that places his parents’ deaths at the heart of a real-life terrorist story of thwarted terrorism—a 1986 incident in which a Jordanian man  sent his pregnant Irish girlfriend on an El Al flight with a bomb in her handbag, which she knew nothing about until it was discovered by security.

Simon’s imaginary terrorist scenario takes on a life of its own via an Internet video chat site, which generates a storm of repercussions. Caught in the middle of this intrigue is Simon’s uncle, a tow-truck driver played by a bearded Scott Speedman, who seems quite transformed by the role—as a sturdy vessel of buried anger, this is the kind of character that would be played by Bruce Greenwood in earlier Egoyan films.

Adoration spins an intricate weave of deception, an avatar maze in which almost every character is revealed to have more than one persona. And as family mysteries are unravelled, Egoyan explores how we use media images to construct and reassemble mistaken identities. In his work, the family is always something lost and found, an ephemeral mesh of secret and lies that slips through our fingers in fetishized rituals of memory and bereavement. Even before sex, lies and videotape, Egoyan built movies around the notion of a life existing on a sadly perishable strip of magnetic tape, as if his films were a kind of memorial to film itself. And long before YouTube, or even the Internet, he explored the notion of isolated individuals role-playing with fake identities via video artifacts in films like Family Viewing and Speaking Parts.

With Adoration, it’s as if Egoyan is finally repatriating his own material.

Also opening in theatres this week…..

James Toback’s documentary portrait of the heavyweight legend is a mesmerizing exhibition of hubris. For more on this, go to my piece in the magazine, The scary confessions of Mike Tyson, and for my videos of the director and his star in Cannes, go to: Tyson videos.