Five takeaways from the 2,000-page report on Keystone XL

State Dept. on Keystone XL: If you want to stop this, please protest very loudly 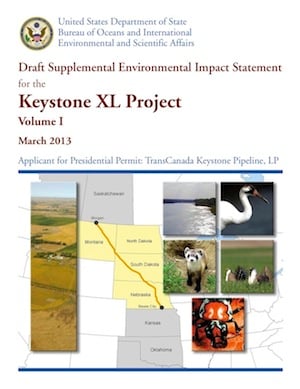 Assistant Secretary for Oceans and International Environmental and Scientific Affairs Kerri-Ann Jones just wrapped up a briefing for reporters on the latest Draft Supplemental Environmental Impact Statement on Keystone XL. Here are a few highlights:

“This draft SEIS is a technical review of potential environmental impacts,” she said. “This draft is not a decision on presidential permit application.”

In about a week, the department will begin a 45-day public comment period on the draft, she said.

During that time, State will hold another public meeting in Nebraska, where an alternative route has been proposed. Then, after reviewing comments, the department will write a final version of the report. Then the State Department will begin to consider whether the project is in the “National Interest.”

TransCanada will be waiting a few more months for a final decision on whether or not there will be a presidential permit to go ahead with the construction of the cross-border section of the pipeline.

2. State concludes that Keystone XL itself will not drive growth of oil sands production.

Asked about how the project would impact greenhouse gas emissions, Jones said that contrary to what many environmentalist critics of the project have been arguing, “We find that approval or denial of any one transport project really remains unlikey to significantly impact development of oil sands.”

3. This conclusion is not set in stone.

“But let me reiterate this is a draft document and we are anxious to get input from the public,” she said.

4. State did not reach conclusion on environmental soundness of project.

Asked how Keystone XL would impact greenhouse gas emissions, she said: “It’s premature at this point to come down with strong conclusions as we want to make sure we get a lot of comments on this and have a full public debate on this document.”

However, she did make a point that the Canadian government has been stressing in support of the pipeline — that the Alberta bitumen would be replacing heavy crude from other countries: “In some cases the oil is coming in and replacing oil already in US system from other sources so the question is, so how much difference does it make?”

5. This fight is hardly over.

“We’re not going to come out and make conclusions at this point until we engage with public and get some feedback,” she said.