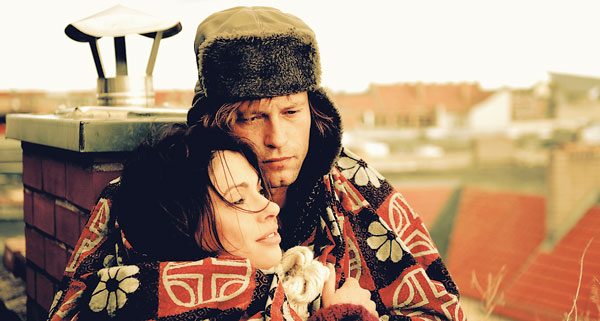 Jana Pallaske and Til Schweiger in 'Phantom Pain'

Tonight I had a beer with Germany’s biggest box office star. I was introducded to Til Schweiger at a small, jammed party for TIFF’s gala premiere of Phantom Pain (Phantomschmerz)—a German movie inspired by the true story of a Canadian cyclist Mark Sumner, whose life was traumatically changed by a car accident.  Til Schweiger has been called Germany’s Brad Pitt. And he co-starred with Pitt, speaking English as one of his Nazi-scalping squad in Inglourious Basterds. But when I ask Schweiger about the comparison, after expressing his huge admiration for Pitt as an actor, he says, “I’m not Germany’s Brad Pitt; I’m Germany’s Will Smith.” (Given that Smith is Hollywood’s biggest earner at the box office, the analogy makes sense.) Inglourious Basterds has been a massive hit in Germany,  bigger than Pulp Fiction. But Schweiger told me he was furious that European countries chose to dub the film rather than subtitle it—undermining the multilingual intrigue that serves as its central comic conceit. “Here comes this guy who goes against all odds,” says the actor. “At the risk of alienating all the Americans,  Quentin had everyone speak their own language, so you wouldn’t have Germans speaking English to each other in a phony German accent.” In his role as a German-American soldier, Schweiger naturally spoke English with his comrades. But for Germany’s version of the film, he had to dub his English lines into German. “The German audience knows me as a native German speaker. And when I’m in an international film speaking English it’s a different  timing, a different rhythm. Then I dub it into German, and the German audience wonders, ‘why does he talk like this?’ ”

When Schweiger asked me what I thought of Phantom Pain, I confessed I had to work late and missed the premiere but planned to catch it in a repeat screening. He said he appreciated the honesty, then recalled an incident at a party where he caught someone’s bluff. Once he was schmoozed by a producer who profusely congratulated him on his performance in a film that he didn’t appear in, but was incorrectly listed on his IMDB page.