I never thought “The Good Wife” was such a bad title. It wasn’t like “Cougar Town,” where you have to stop and ask yourself what this is about and then, when you figure out what the title means, you don’t like it any better. “The Good Wife” sounds a bit like a novel, and implies secrets and potential irony and all that. However, the network and the producers of the show have access to better research than just asking my opinion, and they seem to really feel the title was a mistake. The creators have repeatedly said that they think the title is what’s driving away younger, male viewers, who assume it’s a “chick” show. And now (via Vulture) the network has come out with a promotional poster that literally tells us to disregard the title, and expect a super-hot fun time. It’s sort of the Mary-Louise Parker marketing strategy. 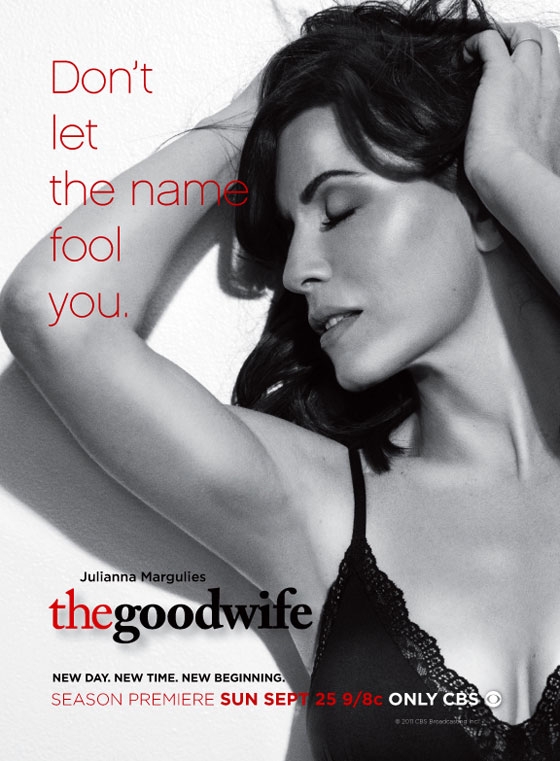 Now, I’ve said in the past, I’m skeptical about the ability of a title to drive viewers away. If titles were automatic turnoffs, “The Sopranos” would never have gotten a viewer who didn’t like the opera. Even Cougar Town gets decent enough ratings (better, anyway, than the shows that have been canceled while it’s been on), and it’s not likely that it would have been that much more popular with a better title. The show probably matters more than the title.

I find it more plausible that a title combined with a nondescript general marketing strategy can drive people away, and the network’s promotion for The Good Wife never made it seem like much fun. Going all the way to the opposite extreme and trying to make it seem young, hot n’ sexy seems like an over-reaction, though. Despite the sometimes Naughty content, it’s not that kind of show, and I don’t think a promotional campaign works when it tries to sell a show that doesn’t exist in the actual viewing.

But perhaps the idea is that since it’ll be up against Desperate Housewives, they’re trying to pull in some of the people who would have given up on it if there was an alternative.