First off, the comedy event of the evening is the return of Parks & Recreation, finally forming a Danielsverse hour with The Office as God intended. Watch it.

Non-events include the beginning of Perfect Couples‘ official run in a time slot that can’t possibly hurt it: after a low-rated show, up against American Idol. (Actually, as Modern Family‘s strong performance last night demonstrates, Idol is not — especially now that it’s lost a step or two — a killer of shows that already have a loyal viewership. Shows that are trying to get a loyal viewership, or shows that just plain nobody wants to watch like Live To Dance, are another matter.)

And then there’s Big Bang Theory, which has had a rather strange season in terms of its place in pop culture. Successfully anchoring its own night, getting more awards recognition and heading into syndication (the Comedy Network already has it in frequent reruns), it’s becoming more of a pop-cultural presence, and yet there’s also a sense that its moment has passed. Partly because it’s up against Community, which means it’s not getting as much 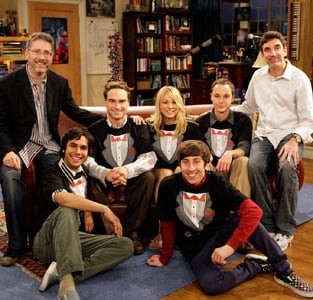 attention online, but mostly because it just didn’t quite get over the hump that separates the good from the great.

Its best season was its second, and that’s not at all uncommon for a comedy, but the second season was a bit… I’m not going to say nobody thought it was great, because it did, in fact, get quite a lot of critical praise that year (all the more impressive because it’s not the sort of show that usually impresses critics). I’ll just say that I personally really enjoyed seeing it improve and gel and turn out some really good episodes, but it never quite seemed to be at that point where it was turning out a batch of great episodes, rather than good episodes with great moments. That’s a bit different from a show that peaked in its second season like How I Met Your Mother. That show also had flaws you could point to, but at its best, it was producing episodes that were so satisfying that the flaws were irrelevant.

Big Bang was more the kind of show where you could point to some fantastic scenes without being totally convinced by the episode, or even remembering exactly what happened in the episode. Maybe that’s part of the whole CBS esthetic. The showrunner of the NCIS twins has frankly said that he doesn’t think audiences remember plots, just moments. That’s actually true, particularly in television (think as far back as all those Twilight Zones where we remember the big twist without being certain about what led up to it) so maybe Big Bang has something similar in mind with its loose, baggy storytelling, where the plots are often thrown away or unresolved, and the only thing that matters is to have a basic situation that leads to some comedy scenes. I didn’t think the show, even at its best, turned this kind of thing into great episodes — to do that, the scenes have to be not just funny but absolutely damned spectacularly funny. But it was a legitimate approach, at the very least, that helped it stand out from all the over-plotted sitcoms on the air.

Anyway, the third season was uneven and the fourth has just been mostly disappointing, though I generally liked the controversial “Sheldon builds a robot” episode (while being surprised that the staff supposedly considered it one of the best episodes ever), the “Justice League Recombination” episode was good, and bringing back Melissa Rauch was a blessing. The show can still be funny, and some nights it makes me laugh more than anything else, granted that this is only because I’m the only person who finds some of this season’s Community episodes less than hilarious.

And it’s hard to point to anything in particular that’s wrong: the humour is a little meaner and raunchier than before, suggesting some failure to keep the Two and a Half Men and Big Bang styles separate, and Mayim Bialik doesn’t mesh well with the cast, but in the bigger scheme of things these are minor problems.

The thing that bugs me, and seems to be bugging at least some other people, is that the show has already become unable to do new things with most of these people, so it’s resorted to trotting out the same comic ideas again. This can work, just barely, if you have a show that is very plot-driven, so you can create a sense of novelty with new plots or settings. This show doesn’t have that option: same sets most of the time, simple plots. All the onus is on the characters, and they are just doing what they’ve been doing for a while. And the more they do the same things, the less likable they become, something that is a particular problem with Sheldon: there’s a very fine line between lovable sociopath and just plain sociopath, and he finally seemed to cross it a few times this season.

Then you have Koothrappali and his inability to talk to women, which has become something of a test case for how you look at the show. You’ll recall that the fact that he couldn’t talk to women was almost the first thing we found out about him in the pilot. For the first couple of seasons, the show piled a few new bits of information on top of that: he could talk if he was drunk, or under the influence of experimental drugs, and he could overcome his shyness if he thought he’d been drinking alcohol even if he wasn’t. Then it… pretty much stopped, and now it’s pretty much just repeating that he can’t talk to women unless he’s drunk.

Chuck Lorre believes very strongly — having been burned by the fact that the network forced him to do pointless story arcs on Dharma & Greg — that shows should not change too much, that they kill the golden goose if they start fiddling around with the things that make characters who they are. Online, the push is always to get characters moving forward, trying new things. Maybe the mushy middle ground is just that characters shouldn’t have to change, but they do have to find new gags to add to the ones they’ve already been doing.

I’ll give you this example because they just invoked the memory of the show in a sketch on Saturday Night Live: you remember the “Carlton Dance” on Fresh Prince of Bel Air? You know when that started? Not until midway through the third season, on a show that only lasted six. I think it grew out of an early throwaway joke about the character liking Tom Jones, and so the writers actually decided to have him dance to Tom Jones, and that led to Tom Jones appearing on the show, and that led to all kinds of related gags that had never even been contemplated in the first two seasons of the show.

Lots of shows have introduced new running gags or character ideas late in the series. TGIF fans with hazy Boy Meets World memories might not remember that the “Feeny Call” didn’t exist for the first three seasons of the show. And that’s not even getting into the truly great long-running comedies, which have found ways to replenish themselves not by changing the characters (they can’t change very much), not even by bringing in new characters, but just coming up with new things to associate with the regular characters. I know Ross said “We were on a break!” way too much — which, itself, became a running gag — but it was something that became an iconic part of the show during its third season. And many supporting characters on The Simpsons had new gags or obsessions added to their portfolios after the second season.

And apart from running gags, characters can become the sources for different kinds of comedy without changing all that much. To continue in the James L. Brooks universe (Brooksverse?), look at how The Simpsons experimented with new, wilder types of humour in its third and fourth seasons, or how Mary Tyler Moore became a bit different just by increasing the importance of the scenes with Mary in Lou’s office (a type of scene that had been in the show since the pilot). Or it can do the same things while framing them in a different way: Taxi simply had Alex become more aware of the fact that all the characters were dumping their problems in his lap, so they would do the same types of stories but his reaction was a little different.

Now, with Big Bang, I can’t think of very much new they’ve found to associate with Raj, or Penny, or even Sheldon, since the second season. Apart from the Wil Wheaton rivalry, which is genuinely funny and has become a true part of the show’s mythology, most of what we “know” about the characters seems to come from the first couple of years. The show has also had a lot of trouble benching old running gags and replacing them with new ones — the robot episode used the knocking, the “Bazinga!” the “Soft Kitty” and the “you’re in my spot” jokes all in one episode, where the great sitcoms often put running gags into semi-retirement after overuse. Even Happy Days stopped “Sit On It!” after a couple of years, but BBT can’t let go.

And I suspect that’s a bigger problem than the lack of character development in the sense of growing or changing. They don’t have to grow and change, but we should at least get some new running bits piled on top of the old ones.