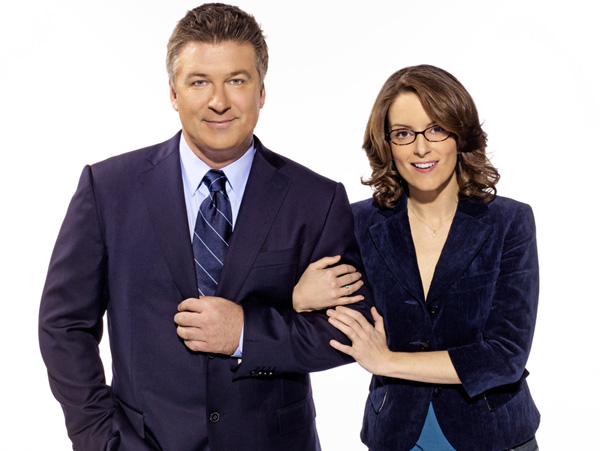 30 Rock is starting to get some critical pushback these days. It didn’t really deserve its third Emmy (I would say it was the third-best of the nominated shows, personally), and its extreme unevenness — great episodes alternating with weak ones, bad jokes and good jokes bouncing up against each other in the same scene — is getting out of hand. As the show begins what looks to be an equally uneven fourth season, some critics are saying not that it isn’t a good show (it is good) but that it falls short of greatness.

– Alan Sepinwall says that this season, the rapidly-improving Parks and Recreation is better than 30 Rock, and

– Todd at the AV Club fears that the show is showing signs of decline, and compares it to another guest-star-ridden sitcom with weakly-defined characters, Will and Grace. (By the way, the AV Club comment section is, for the most part, distinctly unhelpful and full of people who are easily offended by any criticism of a show they like or, worse, good words for anything they consider uncool. It almost makes me glad to have few comments on most of my posts.)

Anyway, my own view on 30 Rock is that it has never been a truly great show (though it has been a very good one, and that’s enough), but it’s probably as good as it’s ever going to be. The show really only has two fully effective characters, Jack and Liz, mostly because they have the only fully developed relationship on the show, and good comedy depends on effective character relationships. (The writers tried to come up with a similar relationship f or Tracy and Kenneth, but they really didn’t make it.) The show is totally dependent on the jokes; a good episode is one where a lot of jokes land. Two good characters, some good jokes, and some fun satirical shots is enough for an entertaining show; I think that a show needs to offer more than that to be genuinely great.

But remember, 30 Rock is really the salvaged wreckage of a weak premise. Faced with an idea that wasn’t working and was too close to another then-new show, Studio 60, Fey and the other writers decided to solve the problem by pumping the show full of jokes, distracting attention from the fact that their original premise was not working for them. By the end of the first season, they had the problems worked out and had re-tooled the premise, but all the characters were left over from that original premise, and most of them had no point to their existence. If the show were to try, now, to turn Pete or Jenna into interesting comic characters, it would probably fail: not only are these characters not strong enough to support any exploration, but the writers committed themselves to a never-ending cascade of crazy jokes, and they can’t thin out the joke rate for the sake of some character development that wouldn’t work anyway. The high joke-per-page rate is the premise of 30 Rock by now; it’s Family Guy with better writers, or a middle-period episode of Night Court without the corny serious bits at the end. There’s nothing really wrong with that. It just means that it will always be mostly a showcase for joke-writing skill. It’s a first-rate showcase, and has also allowed Fey to make some interesting points about corporate life and TV that most shows wouldn’t make; to become a genuine ensemble show about more than two actual humans (and there are some episodes where Liz is so insane that Jack becomes the only human) it would have to re-tool itself again, and it’s not going to (shouldn’t!) do that.

The problems 30 Rock has had in developing the non Liz/Jack characters (if you see them as problems; I do, but not everyone needs to) may be exacerbated by something that’s inherent in the modern single-camera filming setup. Namely, a lot of the actors don’t spend a whole lot of time working together. One-camera film isn’t usually about forming an ensemble, unless the director has enough clout to demand a lot of advance rehearsal. Scenes are shot in bits and pieces, which is great if you’re looking to get big-name guest stars — who can work one day on an episode, instead of being there for the whole week — but not great if the writers are trying to pick up clues about which characters work best together, or learn new things about the characters from their interactions on the set. One reason Jack and Liz have the best relationship on the show may simply be that they have frequent scenes together, really on the set at the same time interacting, in every episode.

The Office has formed a genuine ensemble where any character can get a laugh, and I don’t think that’s unrelated to the fact that due to the documentary format, the show actually requires the cast to be on the set together more than most such shows. (The Office people can’t even leave the set during other people’s scenes, because they have to be at their desks in the background; only the writer-actors, who sit in the back, get to skip scenes.) As it is, Liz and Jack are not merely the only great characters, but the only ones who have genuine chemistry. On a great ensemble show, in the words of the producers of NewsRadio, “every character had a different relationship with every other character.” 30 Rock has one great relationship, a few decent ones, and that’s enough for a good show. Great, maybe not.