The boy in the burka

Sun News dressed a minor in a burka and sent him to the liquor store, for some reason. 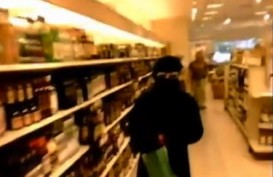 Are you a 14-year-old boy seeking a mickey of Sambuca but you’re four foot three, absent fake ID, and your older brother refuses to break the law on your behalf? Don’t worry about it. Sun News  has got your back.

Thanks to this awesome   exposé on the evil scourge of political correctness, you will never have to go thirsty again. Just pick up a burka at the local Islamic fashion outlet, walk over to the LCBO and voila: Sambuca’s in the bag (don’t forget the chase!)

And don’t forget to tell your friends.

Not only will you be able to break the law and avoid detection, but you’ll be doing our country a great service by exposing the profound hypocrisy of institutionalized cultural sensitivity.

It doesn’t matter, of course, that no one would have conceived of  LCBO burka fraud until the  Toronto Sun invented it. All that matters is that Canadians know the truth:

Burkas = underage drinking. They are weird and dangerous. And it is our duty to try one on every once in a while and conduct a freak experiment in the name of freedom.