Belgians filled the streets in defiance, taking to the sidewalks with chalk and messages of hope 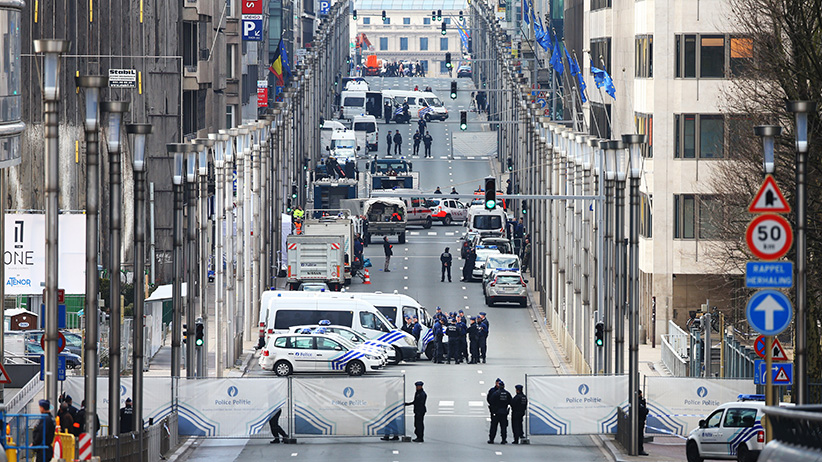 A security perimeter fence stands on Wetstraat as police and security forces gather outside Maelbeek metro station following a bomb attack in Brussels, Belgium, on Tuesday, March 22, 2016. Explosions ripped through the Brussels airport departure hall and a downtown subway station on Tuesday morning, causing deaths and injuries and spurring fears of imminent follow-up attacks in the capital of the European Union. ( Jasper Juinen/Bloomberg/Getty Images)

There is, by now, a numbing familiarity. Jerky cellphone video of dust-filled halls with a soundtrack of alarm bells and curses. Images of dazed survivors streaked with blood and soot, and machine-gun-toting police and soldiers in the streets. Eyewitness accounts delivered before thickets of cameras and microphones. And the cable news network crawls that alternate between body counts and expressions of political solidarity.

The horror of Brussels—at least 36 dead and more than 200 wounded in three separate bomb blasts—is real. But it is also another sequence in a bad dream that has lasted 15 years and counting. A seemingly endless nightmare of death, destruction and sorrow, attacks and retribution, ill-defined as a war between a religion and a point on the compass.

“Ladies and gentlemen, what we feared has happened,” Belgian Prime Minister Charles Michel said in an address to his nation. “Our country and citizens have been hit by a terrorist attack, in a violent and cowardly way.”

Belgium had been on alert since the shooting and bombing rampage in Paris last November, and the subsequent revelations that the plot was hatched in the Molenbeek neighbourhood of Brussels, and that at least four of the 10 terrorists involved had been residents. The entire country was placed in a state of lockdown for days—schools and shops closed, transit systems shuttered, workers told to stay home—for fear of imminent attacks, and there have been hundreds of arrests since. Just last week, Belgian police finally caught up with Salah Abdeslam, who is believed to be the lone surviving Paris commando. He had been hiding out in the capital for months, moving between apartments, all within a few kilometres of his mother’s home. Security was tightened again following his capture, but the move clearly made no difference. The first two bombs on Tuesday went off in the crowded check-in area of Zaventem, Brussels’s international airport. The third suicide bomber struck at the Maelbeek metro station an hour later, in the very heart of the EU district, home to the European Parliament. These are the type of soft targets terrorists prize, and authorities have the most difficulty protecting.

It is, quite honestly, impossible to put yourself inside the mind of someone who stands in a public place, surrounded by men, women and children—even babes in arms—and still finds the will to pull a trigger or push a button and commit mass murder. Is their motivation bloody revenge, or clichéd dreams of paradise, or simply a dark desire to leave a mark? Is their hatred so complete that there is no room for doubt or regret? Not even in that final millisecond between the click and the explosion?

But what is simple enough to comprehend are the aims of those who aid, equip and dispatch them. They want to inspire true terror—that mix of panic and fear that envelopes and overwhelms, and somehow leaves us feeling powerless even as we lash out. They seek to create a toxic cloud of anger that closes minds first, borders second, and soon constricts all sorts of options.

Islamic State, aka ISIS, aka Daesh, aka whatever we are calling them this week, have already claimed responsibility, just as they did for Paris.

“We promise the countries taking part in the coalition against the Islamic State that they will see black days in response to their aggression,” read a statement posted by their propaganda arm. “What’s yet to come is worse and more bitter.”

There is little reason to doubt their words. The group is more of an apocalyptic cult than a political entity, seeking to speed on end times by provoking an all-out war with the West, in which they believe a messianic figure called the Mahdi will lead the Muslims to victory.

Despite the reality that Islamic State has steadily been losing soldiers and territory on the battlefields in Syria and Iraq, there are many who remain keen to help them. Disaffected young Muslims from Africa, North America, and Europe—like Salah Abdeslam, and quite possibly the three Western-looking suspects captured on surveillance footage from the Brussels airport. Financial backers in Arab states who profit both politically and materially from seeding chaos in rival nations. And, seemingly, those on the opposite side of the fence who share the vision that Islam and the West are incompatible cultures.

Within hours of Tuesday’s attacks, Mike Hookem, the defence critic for the UK Independence Party was suggesting the bombings made it all the more urgent that Britain politically untangle itself from the continent, calling the European Union’s borderless, free-movement zone “a threat to our security.” In the United States, Donald Trump took to Twitter to stump for his (unconstitutional and unworkable) plan to exclude Muslims from entering the country: “#Brussels attack is just the latest indication that temporary Muslim pause makes sense. Let’s #MakeAmericaGreatAgain.” Ted Cruz, his rival for the Republican presidential nomination, went even further, demanding that American law enforcement be empowered “to patrol and secure Muslim neighbourhoods before they become radicalized.”

Belgium, where about six per cent of the population is Muslim—twice the proportion in Canada, and six times that of the United States—is so far resisting such fearful measures. Charles Michel has vowed to protect “our freedom and our way of life” but also delivered a message of tolerance. “In this tragic and dark moment for our country, I call for calm and solidarity,” said the prime minister. “We are facing a difficult time, but we have to all face this unified as one.”

Belgium knows the cost of all-out conflict. A battleground in both World Wars, it lost its own soldiers and civilians in great number, and remains the final resting place of hundreds of thousands of foreign fighters, including many Canadians. (The Commonwealth War Graves Commission still cares for 624 different cemeteries in the country.)

Surely that doesn’t make it any easier for its citizens to accept what happened in Brussels on Tuesday, but perhaps history provides some perspective. In the immediate aftermath of the attacks, authorities told residents to stay at home. Instead, they filled the streets in defiance. At Place de la Bourse, the central square outside the stock exchange, hundreds wrote messages in chalk on the pavement. Some were filled with anger, like “F–k Daesh.” But many others resisted the fears the terrorists were so desperate to manipulate. “I do not accept this,” read one scrawled in Arabic. Close by, there was another written in French. “Hug your loved ones,” it said.