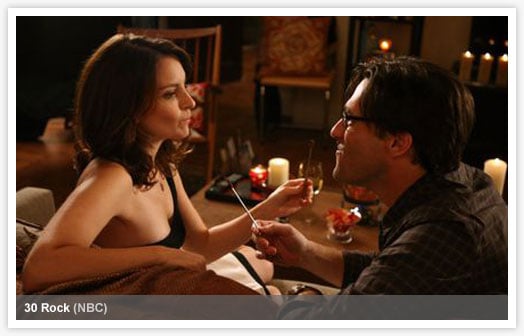 Well, there isn’t a lot to say about them, since they mostly gave the awards to the same people as last year. I keep thinking that the Emmys’ preference for Mad Men and especially 30 Rock signifies a certain preference for hard-hearted coldness on the part of the Emmy voters. For some, Mad Men is easier to admire than to love, and encourages a certain amount of audience distance from the subject, characters and time period (though there’s a very valid counter-argument that the distancing effects don’t actually preclude emotional involvement, they just make us look at the issues in a more clear-eyed way). And 30 Rock is sort of a technocratic comedy, where the joke writing is on a high level, but almost every character is a cartoonish lunatic. The closest thing the show has to a human being is Jack, who — and I’m sorry for repeating myself — has become the show’s straight man and voice of sanity as Liz has become a complete psycho. Its lack of mainstream success is no more surprising than that of Arrested Development, another extremely well-crafted comedy that didn’t have a lot of characters who bore much resemblance to human beings.

I think Mad Men deserved its repeat win, 30 Rock, not so much (its inability to grow, and the fact that it’s let certain holes get bigger like the almost complete wasting of several characters/actors, suggests to me that it’s an entertaining show that peaked in its second year, and isn’t really going to get anywhere near being a great show). But taken together, we can get a sense that Emmy voters, and therefore the majority of TV industry people, don’t worry too much about the emotional temperature of a show; for a show to have a reputation for coldness or lack of charm is not a problem at the Emmys. You could say that dramas have had this going on for some years now, in that the Emmys love showy displays of pure technique like The West Wing, and rarely give the Best Drama award to a show about regular everyday human beings. In fact, by that standard, Mad Men may be more down-to-earth and relatable than most of the other recent winners. But the Emmys used to have a strong bias toward comedies with an element of charm or sentiment, which is one explanation of why Seinfeld and Arrested Development only managed one win each. (And both pulled off their wins before the characters became complete monsters.) Now 30 Rock seems destined to win every year. I don’t know if this is a sign that Emmy voters have now equalized their standards for comedy and drama, or if Emmy voters hate people more than they did a few years back.