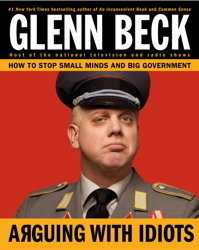 Someone sent me a copy of Glenn Beck’s latest book, meaning I’ve officially crossed over into being Maclean’s designated Professor Emeritus of Beckology or something. Anyway, I wanted to call attention to something that is starting to happen, and which I suspect is going to continue: a split between Beck, who is now on the verge of becoming the definitive Fox News personality, and other conservative pundits. After Beck’s interview with Katie Couric, where he mentioned that he thinks Obama was probably a better choice than McCain (not setting the bar very high, of course), Mark Levin, a popular and insane radio host who is sort of a non-telegenic version of his friend Sean Hannity, attacked Beck (refusing to mention his name, a classic talk-radio technique) as being “incoherent” and “pathetic” and a mere “5 pm-er.” And the day before, Peter Wehner, a former assistant to Karl Rove who was considered kind of the resident intellectual of the Bush White House, wrote that Beck is bad for the conservative movement not only because he pushes crazy conspiracy theories, but because of “his admiration for Ron Paul and his charges of American ‘imperialism.'”

We are probably going to see more of this. Limbaugh already is showing signs that he doesn’t like being overtaken in influence by a self-described “rodeo clown.” Very little of this opposition to Beck is grounded in any clear principles; many of the people who are tut-tutting him for pushing conspiracy theories are the same people who were fine with the even wilder anti-Clinton conspiracy theories of the ’90s. It’s a bit like National Review dropping Ann Coulter’s column when she wrote that America should go to other countries, “kill their leaders and convert them to Christianity”; it was really just a blunt statement of ideas that were appearing on the magazine’s website all the time.

But there are two problems some conservative pundits have with the rise of Beck, and the ongoing transformation of Fox News into a Beckian network. One is that he’s expressing a sort of old-fashioned ’50s Reds-under-the-Beds conservatism, which is by its nature isolationist. What worried Wehner, who is a “neoconservative” very much in favour of foreign intervention, is that this kind of isolationism will take root and become popular; Beck has already attracted many of the people who were Ron Paul followers last year, and many of these people hold views on foreign policy that are closer to the “left” than the right. Now, when a Republican is in office again, Fox News will switch back. (Again, this is familiar if you followed the Clinton era, when the Kosovo intervention was decried as scary imperialism by many conservative pundits and politicians who supported the Iraq invasion a few years later.) But right now they’re validating a viewpoint that many conservative pundits find dangerous and don’t want to see mainstreamed: the conservatism that is anti-intervention across the board, at home and abroad. Fox News will stop promulgating these views when they’re not convenient, but right now, for the sake of ratings, they’re helping to bring the Paulites into the mainstream of conservatism, and so-called neoconservatives hate the Paulites even more than they hate liberals.

The other problem is that many of the leading pundits and talk-radio personalities take themselves very seriously now, especially Limbaugh, who is good friends with important conservative figures and considers himself (rightly) to be a major force in the conservative movement. Levin is the same way, an author whose latest book, “Liberty and Tyranny,” was a bizarre screed which he seemed to think of as a serious argument. Beck, who frequently changes his views on a dime (from arguing for Wall Street bailouts to anti-Wall-Street populism) and has openly turned his show into a wild clown show, is probably seen by the Limbaughs and Levins as an unserious interloper. I think Bill O’Reilly, who like Beck doesn’t seem to have clear or consistent views and doesn’t claim to be a leader for the conservative movement, seems a little more comfortable with his rise; they have a lot in common, anyway. But it must really burn Limbaugh, and there’s some indication that it does.

None of this means that Beck is suddenly awesome. Some pundits think that being hated by the left and the right means you must be doing a good job, but in reality, it usually means the opposite. And because he’s on Fox News, Beck — like any other Fox News personality — is channeling the current populist anger in a Republican-friendly way. But it is true that some conservatives are a little flummoxed by this phenomenon, particularly those who, like Wehner or Limbaugh, consider themselves to be the leaders of an intellectual movement.

It also means there is arguably something to his claim that his views don’t fit onto a conventional left-right axis; I think they do fit fairly well onto the right (though not necessarily the modern right; his is an old-fashioned show in a lot of ways), but Salon’s Glenn Greenwald argues otherwise, and as he notes, Frank Rich made the same argument in his column this weekend. And that sets up a dynamic which we might see more of in the future: more conservatives denouncing Beck, and more liberals saying that he has a point about some stuff. How that would improve over the status quo? It wouldn’t. I never said that U.S. punditry got better.