The Commons: A difference of realities 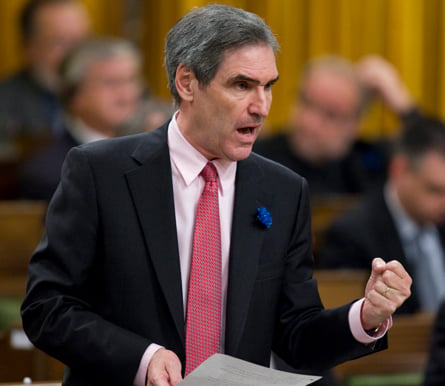 The Scene. Michael Ignatieff stood and, perhaps feeling a bit parched, took a sip of water. Putting down his glass, he proceeded with his supposition.

The Prime Minister, the Liberal leader said, was planning to increase employment insurance premiums. This, he said, will deter employers from hiring. And this, he explained, would add to the tax burden. Across the way, Conservative MP Dean Del Mastro was loudly displeased.

“Will the Prime Minister admit,” Mr. Ignatieff finished, “that he is raising taxes and that tax increases will kill jobs?”

Shaking his head and shrugging, the Prime Minister stood with his version of events.

“Mr. Speaker, on the contrary,” he said, “this government has frozen premiums for employment insurance for this year and next. In the long term, these rates are determined by an independent commission.”

Mr. Ignatieff listened to this response, then stood with a conclusion.

The Liberal leader had not arrived at this finding without evidence. “A year ago the Prime Minister promised we would never run a deficit. Now we are in the largest one in history and it began before the recession even began,” he continued. “Yesterday, Dale Orr said that the Conservative increase in EI premiums, a whopping $15.5 billion, is a tax on workers and employers. Will the Prime Minister admit that his way out of his own deficit is to raise taxes and do so in such a way that it kills jobs?”

The Prime Minister appreciated the question. “Mr. Speaker, I want to thank the leader of the opposition for the question in the sense that it gives me the opportunity to recognize the Minister of Finance in front of his colleagues. He just received an award yesterday,” he reported. “During this very difficult past year, he has been recognized for running one of the largest economic stimulus programs in the world with one of the smallest deficits, a program that has been both effective and leaves us in a strong, long-term fiscal position. I know we all want to congratulate the Minister of Finance.”

“Aye!” the Conservatives sang, leaping to their feet to applaud Mr. Harper’s effective use of the tangential.

Ah, but Mr. Ignatieff had carefully laid a trap for Mr. Harper. With the next question, it was revealed.

“Mr. Speaker, the same economist says, and I quote, ‘An increase in EI premiums is not only one of the most harmful taxes, it is also one of the most perverse.’ This will kill jobs and we still don’t see any way out of this deficit,” the Liberal leader posited. “If the Prime Minister is so sure that he is right and most all economists are wrong, will he at least allow the Parliamentary Budget Officer to get to the bottom of this question and find out where our public finances are and whether this plan will help or hurt the unemployment situation?”

Indeed. Let us forward this dispute to an independent arbiter charged with assessing the situation unemotionally and quantitatively. Let us have some answers, some clarity. Who could possibly quibble with such a proposal?

In fact, no one could. Or, rather, no one would. At least not here. Instead the Prime Minister, rising with the makings of a smirk, would ignore the suggestion entirely.

“Mr. Speaker, last week the leader of the opposition was, and has been for some time, calling upon this government to engage in employment insurance reforms which would permanently add $4 billion to the bottom line of that program. This week he claims to be concerned about how EI premiums could increase in the future,” he reported.

The Liberals howled. The $4-billion figure was, of course, the Conservatives’ own. The Parliamentary Budget Officer’s analysis of the Liberal proposal had put the price tag closer to $1.2 billion.

The Prime Minister’s final words were cut off, his time expired. In his seat across the way, Mr. Ignatieff appeared altogether unimpressed.