The Commons: A thoroughly unsexy day

Lisa Raitt provides no apology, the House is stunned 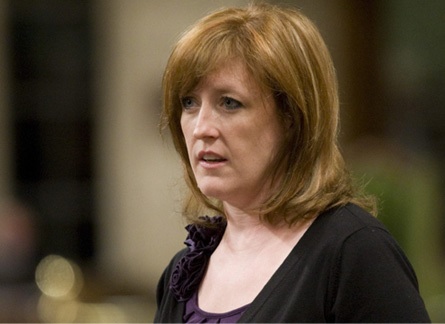 The Scene. Michael Ignatieff wasted few words on the way to a rather devastating question.

“Mr. Speaker, in private, the Minister of Natural Resources said that the isotope crisis was sexy, a means to advance her career,” he began in French. “So how can the Prime Minister explain the words of his minister to a woman who has just discovered she has breast cancer, is waiting for a test, but who cannot due to the isotope crisis?”

Standing opposite and speaking evenly, the Prime Minister proceeded directly to the government’s pat response.

“Mr. Speaker,” he said, “the crisis of isotopes is very serious.”

He reassured the nation and enthused about his minister and then returned to his seat.

“Mr. Speaker,” he exclaimed, “there was no apology, nothing. It’s amazing.”

The Liberal leader proceeded then to up the rhetorical ante.

“Last week a curtain parted to reveal the government’s deep cynicism about the issues facing our country,” he ventured. “The concerns of our largest city are dismissed with a profanity. A health care crisis is designed or re-described as an opportunity for career advancement. How will the Prime Minister explain the comments of his minister, not to this House but to a woman who has been diagnosed with breast cancer who is desperate for a scan and who cannot get it because of the isotope shortage?”

As soon as the Prime Minister was back on his feet, his pointy finger was out and prodding the air. “Mr. Speaker, what I say is that this government has been seized with this issue for some time,” he replied, now louder. “This minister has been working around the clock to make sure that we get a greater supply of isotopes and to make sure we have alternative options for our health care patients in this country.”

Then, a parting shot. “That is what the minister is doing,” Mr. Harper finished, “and that is what this government is doing, not playing cheap politics.”

The Conservative side stood to cheer, various members chanting “cheap” like a bunch of well-dressed chickadees. Mr. Ignatieff stood and took the opportunity to offer the obvious rejoinder.

“Mr. Speaker,” he snapped, “the cheapest politics there is is to call a crisis a career opportunity. This is not. This is about the minister’s performance. The government knows there are not enough isotopes. Today, we learned from the Dutch that if Chalk River is shut down for a protracted period, we will face a disastrous global shortage. The minister’s performance is the failure here. How can she explain that failure to patients waiting for cancer tests who are waiting in vain because of her incompetence?”

The Prime Minister came back loud and apparently proud, first chopping the air, then returning to his finger wag.

“This government has been working since November 2007 to address the delicate situation we have in isotope supply,” he said. “No one has been more prominent in those efforts than the Minister of Natural Resources and her officials who are working around the clock and around the world to address this problem. I wish the member would stop playing cheap politics and help solve that problem.”

“Go back to America!” cried a Conservative backbencher.

The Liberals proceeded to David McGuinty. “Mr. Speaker, today on average 62 per cent of Canadians diagnosed with cancer survive. In the 1960s, it was one in three,” he informed. “Survival rates have nearly doubled over four decades thanks to medical advances in cancer testing, rates that depend on daily access to medical isotopes which thousands of Canadians no longer have. How can Canadians possibly believe the Prime Minister is treating this crisis with the competence and the urgency it deserves when the minister, in her own words, is willing to ‘roll the dice’ with the health of Canadians in order to climb a political ladder?”

The government side turned to Leona Aglukkaq, the health minister. “Mr. Speaker, this is a very serious issue,” she offered. “The shortage is a concern.”

McGuinty tried again. “According to the minister her driving interests are her own, not the interests of Canadians,” he said, returning to Raitt. “Given her in ability to comprehend the seriousness of the situation from the outset, her cavalier attitude toward an emerging national health crisis, her lack of faith in the health minister, her failure to secure access to the medical isotopes Canadians need, how can she possibly be left to manage this file?”

Finally, Raitt was compelled to stand. “Mr. Speaker, to review what we have accomplished on this file since 2007, we have undertaken a major study of AECL and we have actually taken a decision on how to move forward with AECL. We have also taken great steps with respect to medical isotopes,” she said, sounding a bit shaky.

“Is that going to help your career?” moaned the NDP’s Charlie Angus from the south end of the room.

“We struck an expert panel to review the submissions that we are receiving on the long term supply. We are working with the United States on a medium term supply and more fundamentally, on the global supply,” she continued. “Once again, I have to correct the leader of the opposition. The Dutch have said they are willing to shorten up their time of being down this summer and further they are willing to put off their time operation until March next year.”

Oddly this did not dissuade the opposition side.

Gilles Duceppe returned to the original sin, the misplacing of that now infamous binder. Ms. Raitt looked to Mr. Harper to respond, but the Prime Minister sat motionless. After a couple seconds, Raitt realized it was now on her and rose to respond.

“Mr. Speaker, as we have indicated with respect to last week, it was a serious matter,” Raitt confirmed. “We took constructive steps in dealing with the issue.”

“Mr. Speaker,” snapped Duceppe with his second opportunity, “this minister isn’t even decent enough to apologize.”

“Mr. Speaker, let us be clear here,” corrected Raitt, “The only people who are interested in political opportunism is the opposition in the sense that they are the ones talking about it.”

Michel Guimond picked up the attack. Aglukkaq stepped in to relieve Raitt. “Mr. Speaker, this is a serious issue,” the health minister repeated. “The shortage is of concern.”

Raitt made claim to her own empathy. “Mr. Speaker, for the leader of the NDP to indicate that we do not have any caring on this side of the House is simply a ludicrous statement. Every member on this side of the House has unfortunately been touched by illness, sickness and indeed by cancer. That is what motivates us here in doing and caring for the health and safety of Canadians,” she said, turning solemn. “That is no different in my portfolio. With my officials and the Minister of Health, we are working diligently and very hard on this issue to make sure that we get action done instead of rhetoric, conspiracy theories and personal smears.”

Layton seemed at an unprecedented loss for words. “Mr. Speaker, the minister does not think that it is a moral issue that lives are on the line. However, I can say that every Canadian who is dealing with cancer today does think that it is a moral issue. They are being told that they have to wait in line for diagnosis and treatment. What do we have?,” he stammered. “We have a minister who is playing one-upmanship games with another minister in the cabinet. This is so wrong. We have a minister who wants to roll the dice on an issue that is so fundamental. What the hell is wrong with these people?”

Aglukkaq stood to take this profound query. “Mr. Speaker,” she said, “this is a serious issue.”

Marlene Jennings stood and spoke quietly. “Mr. Speaker, now that the courts have ordered a tape of the natural resources minister to be made public, we know that she saw this national health crisis, one she appears to be unable to manage, as an opportunity to boost her career,” she said.

The Conservative side groaned.

“I cannot believe the minister does not relate to the anguish of Canadians waiting for their cancer diagnostic tests,” Jennings continued. “Would she tell Canadians exactly what she finds sexy about cancer and the devastating impact it has on their lives?

“Show it!” cried a voice from the opposition side.

In a momentary break from the interrogation of the Natural Resources Minister, Liberal Rob Oliphant asked the Transport Minister to account for his having told the country’s most populace city to eff off. John Baird stood and informed the House that he’d phoned Toronto’s mayor to offer his apology.

Mr. Harper’s policy on ministerial apologies was left for those in attendance to decipher.

Liberal Carolyn Bennett returned to the unsexy business of the day. The House fell silent. “Mr. Speaker, we heard today from the Canadian Breast Cancer Network that it is appalled by the frivolous attitude and the lack of respect of many elected officials on the severe shortage of isotopes that is affecting Canadians,” she said. “It says the large gaps in the Canadian health care system should not be seen as opportunities to make political points. How is the Minister of Natural Resources able to look in the eye of someone who has just been told they have cancer? When will they get their tests?”

Leona Aglukkaq took this one. “Yes, Mr. Speaker,” she said, “the shortage is very serious.”

Bennett took another turn. “Mr. Speaker, let me put a human face on the crisis for the minister,” she said. “Over 60 times every day in Canada a woman is called back to her doctor’s office and told that she has cancer. She is told that her treatment depends on the results of a bone scan. Right now she is being told that no one can tell her when that bone scan will be. Her treatment will have to wait. In January, the Minister of Natural Resources said she would fix it. Could she explain why the situation is worse than ever, and why women with breast cancer will have to wait? When will they get their tests?”

Raitt stood to answer. “Mr. Speaker,” she replied, “this is indeed a very serious issue for the points put forward by the honourable member.”

“How will this government, indifferent to the anguish and anxiety people, ensure that these supplies will be available at all times?” asked Bernard Patry.

“The Prime Minister has embraced his minister with no sanctions whatsoever, so the Prime Minister now owns those words,” charged Ralph Goodale. “Will he tell cancer patients waiting in the queue for the tests they cannot get today in Saskatchewan just exactly what is sexy about their pain and their anguish?”

“Does she not see that the damage done to Canadians’ faith in their government to help them has been suffering by her actions?” wondered Nathan Cullen. “Why is she still here?”

Raitt repeated her assurances. At one point, she accused Goodale of attempting to hide behind her skirt—her ability to crack wise still apparently intact, whatever trouble it’s presently causing her.

But the lingering plea of the day belonged to the NDP’s Mr. Angus.

Neither question would be answered this day.

The Stats. Chalk River, 22 questions. Infrastructure, five questions. Government accountability, forestry and the environment, two questions each. The Aga Khan, Afghanistan, the CBC, equality and trade, one question each.