The Commons: And so Stephen Harper finds himself in agreement with the Toronto Star

The government faces another barrage of $50-billion questions 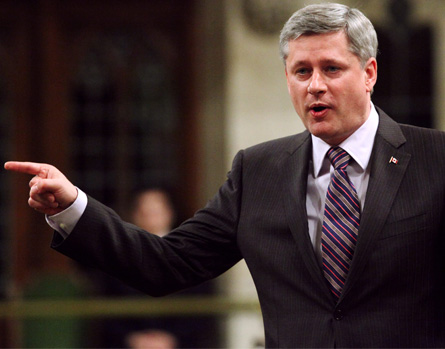 The Scene. Relaxing in the moments before Question Period, Michael Ignatieff and Stephen Harper looked across the aisle and nodded at each other—the Prime Minister no doubt recognizing the man opposite as the guy in all those bootlegged VHS tapes he’s been watching.

A short while later, Chuck Strahl, the Indian Affairs Minister, strolled across the aisle and engaged the leader of the opposition in what seemed a friendly conversation. Though the substance of the discussion was unclear, by all appearances Mr. Strahl understood clearly the words that were coming out of Mr. Ignatieff’s mouth.

As demonstrations of bipartisan collegiality, these were heartening scenes. As demonstrations of human ability, they were important clarifiers. Indeed, if these moments are any example, let there be no question that government and opposition do acknowledge and, at least passably, comprehend each other, whatever misconceptions today’s asking of questions and airing of accusations may have left you with.

“Mr. Speaker, 37 days ago the Minister of Finance said we were on track and now we know we have gone right off the rails,” Mr. Ignatieff began, metaphorically, this afternoon. “Thirty-seven days ago the deficit stood at $34 billion. Now the finance minister says it has ballooned up over $50 billion, but he did not say how much more over $50 billion.”

Here, he lowered his voice a touch. “Canadians are tired of these sorry guesstimates,” he said. “They want to know the truth.”

The Pee-wee’s Playhouse secret word of the day—hypocrisy!—had been revealed in the 15 minutes before Question Period reserved for the celebration of charitable causes and denigration of political foes. But here the Prime Minister sought to make it official, yelling and pawing at the air as usual.

“Mr. Speaker, at the end of this year the deficit will depend, obviously, on the performance of the economy,” he said, leaving the final tally to your imagination. “But what Canadians are wondering about when it comes to more is the leader of the Liberal Party. He comes here, tries to criticize the deficit, but day after day he is here demanding literally tens of billions of dollars of new spending from this government, new spending, permanent spending, unaffordable spending to be paid for by tax increases. Everyone knows his position on the deficit. It is just hypocrisy.”

Back came Ignatieff, now demonstrating his own ability to yell and point.

“Mr. Speaker, my party has an unimpeachable record in fiscal responsibility,” he snapped. “Liberals left them the record that they squandered.”

There were howls from the government side. Gordon O’Connor, the Conservative whip, motioned for his seat-fillers to quiet themselves.

“The Prime Minister made a second claim yesterday, which was that the deficit will be ‘short term.’ There is not a Canadian who believes that is true,” Ignatieff continued. “He got us into this mess. How does he propose to get us out?”

The Prime Minister stood again, only he seemed entirely to have missed the question.

“Mr. Speaker, the record of the Liberal Party is this,” he cried. “Liberals got this country into deficits when borrowing was at record levels and then when recession came, they were cutting the unemployed and raising taxes right in the middle of a recession, something this party will never do.”

Jay Hill, the government house leader, sprang to his feet to salute the boss, calling out to those around him who were not so quick to express their enthusiasm.

“Way to get them up there, Jay!” laughed Ralph Goodale, the Liberal house leader.

“The editorial in the Toronto Star goes on to say, ‘Let’s have a real conversation. The Liberal leader has said he would be open to the idea of raising taxes. The Prime Minister isn’t,'” he reported to great cheers, Steve Blaney, a backbencher filling Lawrence Cannon’s seat to Stephen Harper’s right, leaping to his feet with a passable imitation of a trained seal.

Alas, despite declines in the industry, newspapers these days remain full of words. And while the Prime Minister had reported the above passage accurately, he’d obviously neglected to read further. “Would he undertake massive spending cuts or continue to run deficits?” the Star editorialists asked of him. “Canadians deserve an answer.”

No such answer was coming this day.

Goodale stood next and dared allege the Conservative deficit was “structural.” Jim Flaherty rose and charged the opposition not simply with hypocrisy, but of actually being hypocrites. This move from the behavioral to the personal was too much for the Speaker. “Order, please,” he said. “Members do enjoy freedom of speech, but calling names of other honourable members, I think the member knows, is out of order. We do have hypocritical things happen in the House from time to time, but there is no hypocrite sitting here.”

Bob Rae attempted to gain clarity. “Mr. Speaker, 37 days ago, the Minister of Finance knew that the forestry industry was in trouble. He knew that EI was up. He knew that the auto industry was in the tank,” he reported. “Thirty-seven days ago, the minister said: ‘I’m staying with our budget projection. We’re on track.’ I would like to ask the minister a very simple question, which he has still not answered. How could he have made such a terrible statement a mere 37 days ago with respect to the financial situation in Canada?”

Flaherty demurred. “Mr. Speaker, I pay attention to the questions from one of the leading Canadian experts in deficits, having brought Ontario through that period from 1990-95,” he said.

“Mr. Speaker,” begged Rae, “I am an amateur in this regard.”

“Mr. Speaker, the minister has become the expert,” Rae tried again. “He is going to win the Nobel Prize with respect to the financial situation.”

“Order,” the Speaker called. “There will be more, but we have to have some order so that we can hear it. The honourable member for Toronto Centre has the floor. We will have some order, even if he is addressing a Nobel Prize winner.”

After a battle of sports analogies between Flaherty and Ken Dryden, the Liberals sent up John McCallum to cap the day’s assault.

“Mr. Speaker, three years ago, under a Liberal government, Canada was poised to eliminate its net debt. Think of it,” he mused. “Our children and our grandchildren would no longer have to pay our way. Now, we all know that our $50-billion-man cannot count and that Canadians cannot count on him. But can he at least guess in which century his policies will lead to the elimination of Canada’s net debt?”

He was, perhaps, being facetious. Nonetheless, Flaherty ventured a response.

“Mr. Speaker,” he said, “as the International Monetary Fund noted on Friday, our government paid off about $40 billion in debt in the first three years of our mandate.”

Showing a remarkable ability for simple subtraction, McCallum did the math.

“Mr. Speaker, that $40 billion debt paid down is more than wiped out in a single year by the finance minister’s more than $50 billion deficit,” he noted.

“That,” McCallum said, “reminds me of a story. I ask members to picture it. Queen’s Park, November 2001, Ontario’s finance minister tables an economic statement that says the books are balanced. Thirteen days later he admits there could actually be a $2 billion, $3 billion, $4 billion, or $5 billion deficit. Who was that man? It was our $50 billion man. Did the Prime Minister really think that theatre of the absurd needed a federal replay?”

“Mr. Speaker, the provincial budget in Ontario in 2001-02 was balanced,” he replied. “Yes it was. It was an excellent balanced budget.”

So there. The Finance Minister then referred, one last time, to the hallowed views of the Toronto Star.

Left unacknowledged was that to the right of that editorial was a cartoon. On the one side of that graphic, the Governor General, smiling and stylish, a bit of seal heart in her left hand. On the other side, the Finance Minister, his budget in tatters at his feet, a large black crow stuffed in his mouth.