The Commons: And so we come full circle

The Tories look for support in the unlikeliest of places 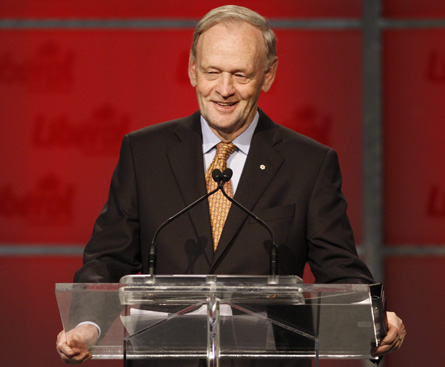 The Scene. The Prime Minister was not in his seat this afternoon when Question Period began. Which seems a shame. Not least because of the profound moment in the history of his government that he was not there to witness firsthand. The rest of us will at least be able to say we were there, that we saw it with our own eyes and heard it with our own ears. The Prime Minister will have to suffice with seeing it on TV. Or perhaps hearing about it from a member of his staff.

Although, maybe it was best he wasn’t there after all. Indeed, in a way, it’s better he was spared the awful sight.

The session began simply enough with the obvious, the Liberal leader wondering aloud about a potential conflict of interest involving a Conservative senator and a sizable government contract. “Mr. Speaker, a pattern is becoming all too clear,” Michael Ignatieff posited. “The Conservative government is using stimulus spending to buy votes and reward its friends. This morning, we learned that one of the Prime Minister’s newest senators works for a company that has just won $1.4 million in infrastructure spending. At a time when the middle class is struggling, would the Prime Minister explain why infrastructure spending that is needed by all Canadians ends up in the hands of a member of his own—”

His time expired, the Transport Minister stood smirking to dismiss Mr. Ignatieff’s concerns. The Liberal tried again, this time en francais. John Baird once more swatted the question away. “Mr. Speaker, there is no reason to jump to the conclusions that the Leader of the Opposition does,” Mr. Baird declared. “If he has any evidence of any wrongdoing, rather than pontificating in this place, he should put his facts on the table and be accountable for those. We have been completely open, completely transparent with the infrastructure spending that we have made.”

The Liberals howled with mocking laughter.

“The grant in question was made by a crown corporation,” the Minister finished, “with no lobbying and no involvement whatsoever of my office or the office of the Minister of Public Works.”

Here, then, is where it happened. Where everything that once was up turned down. Where left became right, day became night and blue became red.

“Mr. Speaker, this is part of a wider pattern,” Mr. Ignatieff said, starting his third attempt. “More than 50 Conservative MPs have handed out $600 million in cheques with their own signatures on them. The Prime Minister walks around…

There was some heckling.

“Mr. Speaker,” Mr. Ignatieff continued, “his spokesman says, ‘We’re shocked. We’re shocked. Let’s round up the usual suspects.’ But everybody knows nothing is authorized by the government unless it goes through the Prime Minister’s Office. Would the Prime Minister tell the House whether he personally signed off on this strategy. Did he or did he not approve these actions?”

As noted, the Prime Minister was not present to address this matter himself. So here, again, came John Baird with the government’s official response.

He might’ve stopped there. He might’ve left well enough alone. But he went on, all caution cast aside, perhaps even unaware himself of what he was about to do.

“Here is what the Prime Minister said,” the Minister continued. “‘Listen. We are the government. I don’t see why we can’t try to get credit for what we do. I hope we do so. There is nothing to be ashamed in that.’ Do members know who said that? It was Prime Minister Jean Chrétien.”

The Conservatives behind Mr. Baird did not boo. They howled delightedly. Indeed, several stood to applaud.

So it was spoken and now so it is written in the record of Parliament, forever cast in proverbial stone. Nearly four years ago, Stephen Harper’s Conservatives came to power on one promise: that he and they were nothing like Jean Chrétien and his Liberals, that he and they were different, better. And here, nearly four years later, was John Baird, one of Mr. Harper’s most trusted ministers, wrapping himself in ideals of a man who represented everything the Prime Minister once despised, making Mr. Chrétien’s words his own.

So much for all that then.

It was all over at this point but for the shouting. A gleeful Gilles Duceppe happily damned the government’s cause. Wayne Easter stood and suggested the Conservatives were trying to “manipulate the public mind.” Mr. Baird rose and said he had pictures of Mr. Easter handing out government cheques in a previous life. Peter MacKay, the Defence Minister, resolutely questioned the patriotism of a pair of opposition members.

It fell to Thomas Mulcair, the NDP deputy, to stand and delight in the day’s revelation.

He paused for comedic effect.

“No, they have already done that,” he answered. “When will the government clean up its act and stop using taxpayers’ money for partisan political purposes?”

Mr. Baird did not have much of an answer for this one.