The Commons: And then, suddenly, an answer 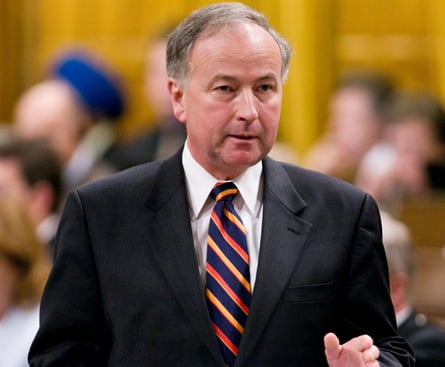 The Scene. It was not otherwise a particularly remarkable day.

The Liberals persisted in asking the government to account for the current shortage of medical isotopes. The government insisted on doing no such thing. Jack Layton pouted about not receiving an invitation to the Prime Minister’s afternoon tea with Michael Ignatieff the other day. The Prime Minister jabbed his finger and waved his arms and declared the NDP an annoyance. John Baird scorned Mr. Layton with one answer and congratulated him on the birth of his granddaughter—Beatrice Dora Campbell, eight pounds and one ounce, born 12:03am Wednesday morning to Jack’s daughter Sarah—with the next.

Not even the early appearance of Irwin Cotler, the former justice minister rising immediately after Michael Ignatieff had dispensed with his three questions, seemed a cause for much concern. With the House breaking tomorrow for the summer, it appeared the Liberals were merely giving the venerable old lawyer a ceremonial opportunity to register a couple long-held grievances.

Mr. Cotler moved to the case of Abousfian Abdelrazik, the Canadian still bunking at our embassy in Sudan, awaiting an answer to the cruel riddle of his situation. “Mr. Speaker, Abousfian Abdelrazik is another abandoned Canadian citizen. In spite of the Federal Court’s severe rebuke, this government continues to violate Mr. Abdelrazik’s rights by refusing to bring him home,” Mr. Cotler posited. “The government has had two weeks to read a judgment that is unequivocal in its findings of fact and conclusions of law. Every day it waits is a continued violation of Mr. Abdelrazik’s rights. Does the government plan on appealing the court’s decision while delaying justice at Mr. Abdelrazik’s expense, or will it heed the court’s order and immediately return Mr. Abdelrazik home to Canada?”

It was here that something truly astonishing happened.

Two weeks ago, hours after the Federal Court ordered Abdelrazik home, Bob Rae had asked the government to do likewise. And Justice Minister Rob Nicholson had taken the question with typical regard expected of an attorney general. “Mr. Speaker, a very lengthy decision of the Federal Court was handed down this morning,” he said. “Inasmuch as I have never been a member of the NDP, we will actually read the decision before taking a decision on it.”

Liberal Michelle Simson and NDP MP Joe Comartin tried again the next day. “Mr. Speaker, this is a very extensive ruling and of course we will take the proper time to review it and reach a decision in due course,” huffed Nicholson.

Comartin checked in three days later. “Mr. Speaker, I would be glad to tell the House that we are reviewing that decision very carefully and we will be making a decision in due course,” Mr. Nicholson reported.

Four days after that, New Democrat Paul Dewar took a turn. “Mr. Speaker, our government will make a decision at the appropriate time,” responded Daniel Petit, the parliamentary secretary filling in for the minister on a Friday morning.

Little more was expected as Mr. Nicholson rose to take Mr. Cotler’s question. But here came the Justice Minister all the same.

“Mr. Speaker,” he began simply, “the government will comply with the court order.”

This was, almost certainly, an answer. And in that it was perhaps the most remarkable string of ten words this place has heard in some time.

The Liberals and NDP stood to applaud. In his seat, Mr. Cotler beamed. Bob Rae rose from his spot and walked over a few rows to shake his hand, the winning of a clear, concise acknowledgment such a rare victory.

In the foyer there was attempts to make sense of it.

“Well, I’m pleased, first of all, for Mr. Abdelrazik that he’s able to return home and that what the court called a Kafkaesque process has finally come to an end,” said Cotler, looking perhaps a little less rumpled than usual. “I’m also pleased that the government finally belatedly, you know, respected the Charter and respected the rule of law and is bringing him back to Canada.”

There was quick talk of an inquiry. Cotler speculated that a parliamentary committee might convene a special summer sitting to hear from Abdelrazik, though one wonders if, on that threat of still more Kafkaesque process, the poor soul might prefer to stay in Sudan.

Someone asked Bob Rae how to reconcile Mr. Abdelrazik’s imminent return with Omar Khadr’s continued exile. “I still don’t see consistency,” observed Rae, “but it would be churlish of me to object to the decision the government has made today.”

On the afternoon of April 30, 2008, Paul Dewar had first asked the government to account for Mr. Abdelrazik’s plight. “When will Mr. Abdelrazik be back in Canada?” he wondered.

“Mr. Speaker, we are currently examining Mr. Abdelrazik’s case,” assured Maxime Bernier, a week before the nation learned the name of Julie Couillard.

Fourteen months later, Dewar stood at a microphone looking equally delighted and stunned. “Well, the government didn’t give us the plans today about Mr. Abdelrazik’s return,” he cautioned. “What we heard today was that finally, finally after six years Mr. Abdelrazik will be able to come home. Of course the question is why didn’t they make this decision earlier? Why didn’t the government allow one of its citizens to come home?”

He steadied himself just long enough to celebrate.

“It is, however, for me just—it’s a great day for a Canadian citizen. It’s a great day for his family that he will finally be able to see his kids,” he said. “This is a gentleman whose wife died while he was away, whose kids have been without parents. I’m just—hallelujah, finally he’s coming home.”

So much remains unsettled. But Abousfian Abdelrazik is coming home.