The Commons: A stare down

A tale of two press conferences 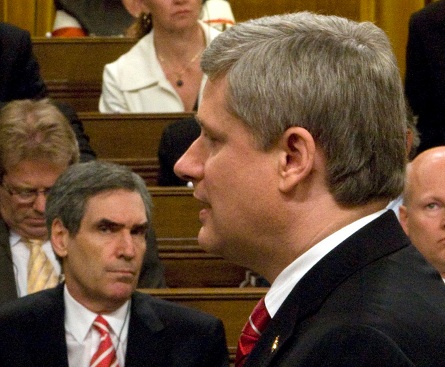 The Scene. Michael Ignatieff, in dark suit and white shirt, his tie red with white stripes, strode into the National Press Theatre and placed his notes on the wooden podium in front of him. He attempted first to make himself clear.

“The Liberal party is not seeking an election,” he said. “We want parliament to work. We want to replace confrontation with cooperation.”

There was a caveat. There is always a caveat. “But,” Mr. Ignatieff continued, “we need the Prime Minister to deliver the accountability Canadians expect from their government.”

He began then to tell the woeful tale: of the fall economic update that nearly ate Canada, of political crisis and untended recession, not to mention those allegations of sedition.

“There is no coalition,” he assured.

The nation let slip a heavy sigh of relief.

He traced his party’s previous demands that the government report regularly to Parliament on its progress. He dismissed the Bloc and NDP as parties of perpetual opposition. He asserted his intent to one day win the right to govern. And then he arrived at the central concern of this warm Monday morning in June.

“We listened to the Prime Minister. We studied the report carefully and we consulted with Canadians,” he assured. “And we have serious questions about this report and the government’s performance.”

This was now assuredly not going to end well, serious questions not particularly tolerated in this Ottawa.

He wanted, he said, a resolution to the inefficiencies of our current system of insuring the unemployed. He wanted, he said, a clear explanation of the money spent so far and the money to be spent in the coming months. “Note my words,” he explained. “Not committed, not authorized, not flowing, not announced, but spent.”

He wanted, apparently, to restate the questions with which his side has been hounding the government for months now to little effect.

He motioned mostly with his left hand, clenching his fist, putting his index finger and thumb together, opening his hand and chopping forward. He shifted his weight from one foot to the other, his angular eyebrows bobbed and weaved. He smiled slightly. He sought seriousness. He clarified several times that, worse coming to worse, his party would vote against the government’s latest request for cash. He fell in love with words like “reasonable.”

“I think reasonable people can find reasonable grounds,” he said. “That’s what cooperation means in politics.”

“I just want to give a sign to the Prime Minister that I’m a reasonable person,” he offered.

“I’m not a stubborn person,” he assured.

“You have to be pragmatic,” he advised.

“Any sensible person understands that Canadians want to work,” he claimed.

“I’m pragmatic about how we solve the problem,” he declared.

“I’m just trying to work with the government to make Parliament work,” he pleaded. “That’s the situation. And the fact that I, in your words, I left the Prime Minister a way out, well, that’s my style. I’m trying to work cooperatively. That’s what I’ve done from the beginning.”

“This is what leadership means,” he surmised.

He broke character rarely, lamenting that he and Mr. Harper haven’t spoken since January, damning the government’s handling of the isotope shortage, refuting Conservative claims about Liberal intentions, pausing briefly to impersonate a teenager spraying a garden hose all over the lawn to explain the government’s approach to federal spending.

He finished his half hour with a soliloquy of sorts.

“If you’ll allow me to conclude on one note,” he said. “My stake in this is actually proving to Canadians, who are very skeptical about politics and our political system, that we can make this system work for them. That we can hold a government to account, get them to improve their performance, get good government for Canadians. That’s the big prize here actually. Make Canadians feel we got a pretty good system here and it works for Canadians and it delivers results for them. We get that, good result.”

Looking pensive, he exited the stage.

Four hours later, Stephen Harper, in dark suit and white shirt, his tie red with multi-coloured stripes, strode into the National Press Theatre without notes. He hadn’t expected to be here, had hoped the official opposition would give him an opportunity to respond in the House during Question Period. Mr. Ignatieff had insisted on asking about our looming national health care crisis, thus necessitating this visit.

“I’m here because I did anticipate Mr. Ignatieff would ask me some questions today in the House of Commons that he never asked me,” he told the assembled press, “so I’ll give you a chance to ask some of them.”

Standing at the podium, Mr.Harper attempted first to make himself clear.

There was a caveat. There is always a caveat. “If he wants to avoid an election and see the spending continue, the easiest way to do that is simply vote for the estimates,” he vaguely threatened, “vote for the spending to continue Friday and vote against an election. That’s what the Conservative Party will be doing and so I would encourage the opposition to do the same thing, pass the estimates and let the programs continue.”

He told the heroic tale. Of the economic action plan—sorry, the Economic Action Plan—that is saving Canada as we speak, of the clarity and cash and opposition demands. He boasted of his government’s work so far and promised more of it. He repeated the sort of claim Mr. Ignatieff had earlier dismissed as inaccurate. He spoke ominously of the coalition.

He shrugged and sighed and shook his head. He gestured with both hands as he generally does when pleading his case. He spoke quietly. He smiled slightly. He refuted and interpreted Mr. Ignatieff’s demands as he saw fit. He seemed preoccupied by the proper processing of paperwork.

“Those kinds of changes and other major changes,” he vowed, “cannot be done on the back of an envelope in a few days.”

“I’d be happy to meet him,” he offered, “But, you know, we just put out a report on the very subjects he requested.”

“There is a long-term challenge,” he noted, “and there are no quick fixes.”

“This is not something we can do in a week or two weeks,” he claimed.

“That’s not an easy question,” he explained. “It’s not a back-of-the-envelope thing.”

Near the end of his time, he confessed confusion with Mr. Ignatieff’s tone.

“It’s very difficult to respond to an ultimatum that contains no ultimatum,” he reckoned. “Usually you say do X or else. You don’t just say or else.”

He laughed at his own quip.

He took one more question, turning serious, shrugging several more times and dismissing the vagaries of his rival.

Thanking reporters for 15 minutes of their attention, he smiled slightly, then took his leave.