The Commons: Bring it on

Men and women of principle can only be pushed so far 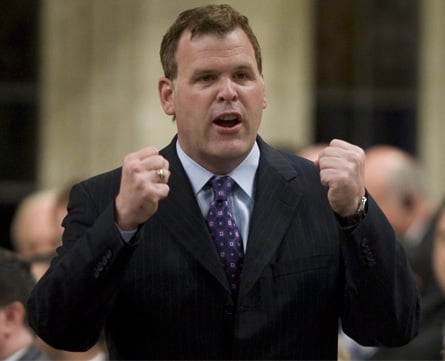 The Scene. Worried perhaps that his point had been lost amid yesterday’s unpleasantness, David McGuinty stood at the start of Question Period this afternoon and picked up approximately where he had left off the day before.

“Remember the facts,” he said. “One hundred million dollars of partisan propaganda without accountability, infrastructure funds distributed as if they were reward points and more than 60 investigations by the office of the Ethics Commissioner, a minister under investigation for his ties to lobbyists and federal agencies, a Conservative senator linked to key players in a scandal.”

Then, a simple-enough question. “When,” Mr. McGuinty wondered, “are the Conservatives going to clean up this ethical mess?”

The Prime Minister stood, buttoned his jacket, adjusted his left cuff and addressed the Speaker on another matter entirely.

“Mr. Speaker, this is a time of global economic recession,” he said, “but Canada’s performance exceeds that of many other countries and the measures of government are well-supported by Canadians and even the vast majority of provincial governments.”

This much had been said in French, the language employed for Mr. McGuinty’s first question. But, before sitting, the Prime Minister switched momentarily to his first language. “This question,” he said, “reminds me of the old saying: ‘When you throw mud, you lose ground.'”

So there. The Prime Minister returned to his seat then, entirely done dealing with the Liberals for the day.

Back to Mr. McGuinty, a man quite capable of standing tall and projecting displeasure.

“Mr. Speaker, the Conservatives have spent 12 times more on meaningless sloganeering than on real information on H1N1. At 12 times more, that is $100 million,” he reviewed. “The Prime Minister may think that it is his money, but it is not. Taxpayers should know that $100 million buys a year’s salary for 1,700 public health nurses. It buys 10,000 ventilators, or it buys 35,000 days of ICU beds. Why does the Prime Minister insist on wasting borrowed money on partisan advertising while Canadians struggle to deal with this pandemic?”

As noted, the Prime Minister was entirely done with this, so up came John Baird, a man who seems to exist primarily for these moments.

“Mr. Speaker, I say to the member for Ottawa South that this government has an important responsibility to communicate our actions through Canada’s economic action plan,” the Transport Minister instructed. “We are focused on jobs. We are focused on fighting H1N1. We are focused on building industry and we are focused on supporting the unemployed. All we have is the sloganeering from the Liberal member opposite and that is too bad.”

Indeed, it is to their eternal detriment that politicians insist persistently in behaving like politicians. And good on Mr. Baird for calling to a higher purpose.

“Mr. Speaker,” responded Mr. McGuinty with his next opportunity, “the Prime Minister’s horse called accountability, the one he rode to Ottawa on, has apparently died.”

The Conservative side did not find this particularly funny. “So did that joke!” chirped one government member.

“Infrastructure money is dispersed like points in a Conservative rewards program,” Mr. McGuinty continued. “There are over 60 investigations before the ethics commissioner. There is a minister under investigation for improper ties with lobbyists and federal agencies. There is a Conservative senator linked to key players in an emerging scandal. Is this what Joe Clark meant when he said that these Conservatives were ‘a private-interest party in a public-interest country?'”

“Joe! Joe! Joe!” the Liberals chanted, obvious in their admiration for the fleeting former prime minister.

In his seat, the Prime Minister shook his head with obvious disdain.

Up next it was Marlene Jennings, speaking ominously about something or other to do with a Conservative senator. Mr. Baird seemed entirely scandalized by her tone. “Mr. Speaker, the outrageous comments made by the member opposite do not serve her or her constituents well,” he gasped. “They do not serve the Liberal Party well.”

Ms. Jennings stood and once more raised any number of questions. Alas, Mr. Baird could take it no more. Indeed, you can only push a man of principle so far. Each of us has our limit. None of us are without weakness. If you prick us, we do bleed. If you tickle us, we do laugh. And if a tree falls and blocks the high road, we must find a detour, sometimes taking us through a particularly seedy part of town.

And so it was that the Transport Minister did stand and cast aspersions on the associate of an obscure Liberal party official.

“Ohhh!” howled his mates on the Conservative side, delighted with this turnabout.

But Ms. Jennings seemed only too pleased.

“Bring it on!” she yelped, motioning for any of her hecklers to cross the aisle and have a go. “We’re not afraid!”

The Stats. Ethics, 11 questions. Afghanistan and H1N1, four questions each. Government advertising, three questions. The military, the environment, taxation, fisheries, crime and employment, two questions each. Arts funding and Iran, one question each.