John Baird addresses the pressing questions: Where's the PM? Where are those pictures of the PM? And where does that stimulus money go? 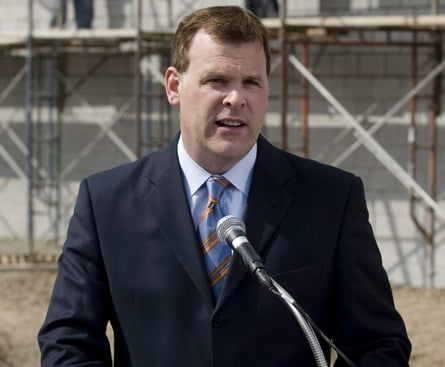 The Scene. You’ll forgive the Prime Minister if he’s a bit shy, if he’s just not that interested in the traditional trappings of leading your very own G8 nation.

So it was last week, with the best and worst of the international community gathering in New York, that Stephen Harper could stomach but one highfalutin dinner before jetting back home for a Tim Hortons run. And so it was today, with the business of Parliament resuming beneath the stained glass and chandeliers of the House of Commons, that Mr. Harper jetted off to furthest New Brunswick, where, as luck would have it, a lectern had been set up in front of an idle locomotive and a representative sample of Canadian blue collars.

There the Prime Minister found a crowd eager to hear him explain how well he was handling this economic unpleasantness and applaud his assurances thereof. Now, sure, here you may argue that the Prime Minister needn’t go to New Brunswick to find individuals willing to applaud his pronouncements on cue. Indeed, you might point out, the Canadian public pays something in the order of $157,000 to each of 142 individuals whose job it is to stand every so often in the House of Commons and do exactly that.

But then you would be ignoring the fact that those 142 individuals do not constitute even a majority of members of that august chamber. And the rest constitute an unruly collection of scoundrels and skeptics, many on the record as not entirely believing in the Prime Minister’s propensity for fulsomeness.

“The government reports to the people of Canada,” the Prime Minister’s press secretary observed over the weekend. And let it never again be said that the individuals who constitute this place in any way represent such Canadians.

All the same, the constitution compels these 308 individuals to every so often gather and debate the issues of the day. And with the Prime Minister away—and the Finance Minister gone to keep him company—the government turned this afternoon, understandably, to John Baird. For sure, if there is anyone who can make something of this painful inconvenience, surely it is the Transport Minister, a man well-known for his measured tone.

“Mr. Speaker, what the Prime Minister was very proud to announce on behalf of the Canadian government and to report to all taxpayers is that 90 per cent of the emissions contained in the economic action plan are indeed underway,” John Baird responded, having clarified with the Prime Minister his exact level of pride shortly before QP.

“Not true!” yelled Ralph Goodale from the opposition side.

The Conservatives stood to applaud. Mr. Ignatieff came back incredulous.

The Conservatives yelped and cackled.

“What is the OECD and the Royal Bank telling us?” Mr. Ignatieff continued. “They are saying we are going to lose 250,000 next year. This dog will not hunt. When will Canadians be able to trust a government that does not tell the truth?”

This seemed a rhetorical question that did not necessarily require response. Mr. Baird stood all the same.

“Mr. Speaker, I will tell you what is happening right across the country,” he said. “Infrastructure projects are being tendered, contracts are being issued, shovels are in the ground, engineers and architects are at work. We are working hard with the provinces, with the territories and with the municipalities in every corner of this country to get the job done. What Canadians expect is for all of us on this side of the House and that side of the House to work hard, to focus on the economy, to create jobs and not try to plunge Canada into an unnecessary and self-interested election, which is what the leader of the Liberal party would have us do. That is not in the best interests of Canadians. That is only in the best interests of the Liberal party.”

It was here that Mr. Baird revealed himself to have not even the faintest idea of what he spoke. Indeed, even a cursory glance at recent polls shows an election to be anything but in the best interests of the Liberal party.

Mr. Baird was ready for this one.

“Mr. Speaker, I am very pleased to report that in the great riding of Markham—Unionville, the city of Markham applied for 14 infrastructure stimulus grants and does anyone know how many were approved?” he asked. “All 14 were.”

This was, of course, reference to the assertion of one Gordon Landon, a Conservative candidate and prospective member of the Prime Minister’s cheer section. Last week, Mr. Landon claimed that partisan interests were motivating government spending. The Liberals claimed this as evidence, the Conservatives dismissed this as nonsense, and Mr. Landon found himself uninterested in speaking publicly.

A short while later, the House arrived at precisely the sort of matter for which this place exists. Recently, Martha Hall Findlay reported, several pictures of the Prime Minister disappeared from a government website—in reference to a controversy that needn’t be recalled here in the excruciating detail with which it has already been investigated.

“Pourquoi?” she asked, quite simply.

There was some confusion on the government side, no minister directly assigned the task of managing Mr. Harper’s scrapbook. After a few awkward seconds, Mr. Baird stood to offer response.

“Mr. Speaker, we are very focused on infrastructure projects right across the country. We are working hard with our provincial, territorial and municipal governments,” he assured. “We would not have had the amount of success on infrastructure spending or the type of co-operation we have with the provinces if it were not for the leadership of the Prime Minister who has put politics aside and is getting the job done.”

Ms. Findlay insisted on asking her question again. “Mr. Speaker, I was actually prepared to respond to at least an attempt at an answer but that was not even an attempt at an answer,” she said. “I will volunteer that hastily making drastic changes to the website in the middle of the night sure looks like a guilty kid trying to cover his tracks. Why will the government not admit that its hands were caught in a taxpayer-paid cookie jar?”

Given a second opportunity, the Transport Minister was better prepared to respond in kind. “Mr. Speaker, while the Liberal party is trolling the Internet looking for pictures of the Prime Minister, it is this Conservative government that is working hard to create jobs to inspire more hope, to inspire more opportunities for the Canadian economy,” he shot back. “That is our priority, not logging on to the worldwide web in the middle of the night like the member opposite.”

Alas, without the pleasure of seeing Mr. Harper in person, we are left to gaze longingly at whatever images we can find of our reclusive Prime Minister.