The Commons: Everything about this is awful

Lisa Raitt apologizes—but was it all Ralph Goodale's fault? 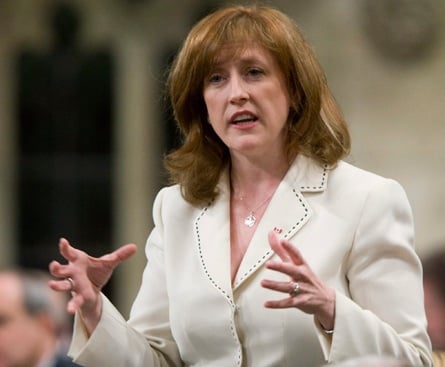 The Scene. About ten minutes past the appointed time, the cameras outside the door began to flash, announcing Lisa Raitt’s arrival. A few seconds later she appeared at the entrance to the cramped room in Centre Block’s basement reserved for announcements, explanations and apologies.

Ms. Raitt collected herself, then approached the podium, the standard array of flags behind her. She placed her notes in front of her, sipped quickly from a glass of water and then, with watery eyes, began what had been promoted simply as a short statement.

Opposition anger the day previous had been dismissed as “cheap politics.” Others argued it simply had to be accepted that ministers of the crown would naturally, if in private, find something “sexy” in a potential health care crisis. Given a night to think it over, the minister herself had apparently suffered second thoughts.

Three young men from the Prime Minister’s Office watched from the side. At the front of the room, the Natural Resources Minister apologized to those who might’ve taken offence to a statement she had not intended any of us to hear. She expressed “deep regret” and offered a “clear apology.” She paused at the end of each sentence to take a deep breath.

She spoke of her father and his 18-month ordeal with colon cancer. She spoke of watching her brother die from lung cancer. She struggled to swallow the lump in her throat. With tears welling in her eyes, she made a brief, futile search of the podium for tissue.

She steadied herself, finished her testimony, pledged to carry on, then took her leave.

An hour and a half later she arrived in the Commons. As the House settled in for Question Period, she approached the front bench to have a short word with Jim Prentice, the latest colleague apparently impugned on that tragically misplaced digital recorder. When she finished there, Liberal Geoff Regan, her opposition critic and a fellow Nova Scotian, walked over for what appeared a friendly, possibly even supportive, word.

Shortly thereafter, with everyone back in their seats, the questions began anew.

“Mr. Speaker, the long predicted crisis is now upon us,” Michael Ignatieff began, adopting a prosecutorial tone. “Hospitals in smaller communities will run out of isotopes in the next 48 hours. The Chief of Nuclear Medicine in Hamilton said ‘that deaths could occur’ if supplies fall much further. The Prime Minister claims that the government has acted on this issue since the last shutdown on its watch in November 2007. After 18 months of this, is this all the Conservatives have to offer, a national health care crisis?”

The Prime Minister was elsewhere, entertaining the Colombian president, so it was on Raitt to lead the government response. She stood and attempted to find something worth being proud of in what is variously being deemed a catastrophe.

“Mr. Speaker, what I can indicate to the House today is the following. We have been in contact with industry with respect to the supply of medical isotopes. I can tell the House that it has been indicated that hospitals will receive next week over 50 per cent of their orders which is markedly up from what they had anticipated,” she said. “As well, we have been working with the global network of nuclear reactors with respect to supplying even more. OPAL has also indicated that it will be able to come on line sooner, as long as we continue to help them and which we have been doing.”

Mr. Ignatieff’s concerns were not soothed.

“Mr. Speaker, with respect, there is a dispute over the facts here,” he said. “The Conservatives keep pretending that there is an alternative supply of isotopes but we have spoken to the Dutch and the Australians. They say yes, they can ramp up production…”

The Conservatives clapped, but the opposition leader continued.

“…but they cannot make up the shortfall and they cannot say how many isotopes will actually end up in Canadian hospitals. So where is the credibility in the minister’s assurances to those Canadians whose tests are currently being cancelled?”

Raitt stood and spoke of “contingency plans” and a “high-level meeting.”

Mr. Ignatieff kept on. “Mr. Speaker, the crisis in the public health system is getting worse and we can not rely on the assurances of the Minister,” he said. “François Lamoureux, president of the Association des Médecins Spécialistes en Médecine Nucléaire du Québec said yesterday: ‘The government does not realize the disaster for the sick … Patients are taken hostage.'”

Leona Aglukkaq, the health minister, offered her assurances and empathy.

David McGuinty took a couple turns. “Mr. Speaker, in January, questions about heavy water leaks and effects on isotope production at Chalk River were dismissed by the minister as fearmongering. Then she repeatedly claimed that isotope production was reliable,” he reported. “At the Ottawa Hospital, 180 patients, 60 per cent of whom have cancer, are now being told that their scheduled diagnostic treatments over the next few days are at serious risk. Would the minister now explain to those patients and their families why she refused to take this crisis seriously and can she now advise them on exactly what it is they should do?”

“Now it is the time for the world to help us,” Raitt offered. “They are doing so.”

There were periodic cries of “shame!” from the opposition. The government side moaned and groaned at the persistent questions. In the front row, Chuck Strahl grimaced and shook his head. When Gilles Duceppe kept on the file, Ms. Raitt sought to identify Ralph Goodale, the Liberal house leader, as the one who should be accounting for our predicament.

Jack Layton asked the minister to account for her own words. “Mr. Speaker, on the infamous tape, the Minister of Natural Resources said: ‘This is an easy one. You know what solves this problem? Money. And if it’s just about money, we’ll figure it out.’ Well, five months later, it certainly is not figured out,” he said. “Would the minister tell this House today just how much money has been devoted to addressing this crisis that faces us? Would she also explain why it is that she has not stepped in if it is such an easy problem to fix the reactor and ensure that the patients get the isotopes they need.”

The government side mocked and laughed. John Baird loudly compared the NDP leader to Homer Simpson.

“Mr. Speaker, obviously it goes without saying, if any of us had the technical capabilities to fix the issue, we would do so,” Raitt assured.

Layton persisted. “The Hotel Dieu Grace in Windsor and the Ottawa Hospital are cancelling emergency scans right now,” he reported. “Dr. O’Brien of the Ontario Association of Nuclear Medicine said that the minister: ‘diminished the seriousness that the medical isotope crisis is having on patients’ access for heart disease and cancer treatment.’ Does the minister realize that she no longer has the confidence of the medical experts or Canadians?”

Liberal Alexandra Mendes gave it a try. “Mr. Speaker, François Lamoureux, president of the Association des médecins spécialistes en médecine nucléaire du Québec, says and I quote, ‘This medical disaster was predictable. Everyone knew.’ What solutions did the government put in place since these issues repeatedly came forward?”

Mendes rose once more. “Mr. Speaker, I quote Mr. Lamoureux: “The ill have been forsaken. How sad it is.’ Meanwhile, in Trois-Rivières and Quebec City appointments for testing are cancelled. In Joliette, it will soon be the same. What concrete steps have been taken? What arrangements are in place and what guarantees can the government provide to patients who suffer?”

Ms. Aglukkaq agreed that it was a “very serious issue” but spoke hopefully of alternatives.

The day climaxed with the appearance of the aforementioned Mr. Goodale.

“Mr. Speaker, let us be clear, two isotopes crisis in 18 months under the Conservatives, and none under the Liberals,” he lectured. “The minister claims to have assurances from the Dutch, the Belgiums, the Australians and the South Africans to provide extra supplies of isotopes. Just exactly what is Canada’s shortfall in isotopes today? How many, exactly? What will it be in two weeks? Next month? Does the minister have an absolute guarantee that all that isotope shortage in Canada will be replenished—”

He was still shouting across the aisle as his time expired.

Raitt rose to respond. “Mr. Speaker, I can say that when the honourable member from Wascana actually was the Minister of Natural Resources and knew in 2003 that the MAPLE reactors would not work, I wish he had asked as many questions, because then we would not be in the situation we are in now,” she fired back. “The reality is: the reason why we are dealing with this in an open and a transparent way is because in 2003 when the MAPLEs did not work, they hid the crisis.”

Goodale was back up quick, but the Conservatives laughed and heckled until the noise was too much and he was compelled to sit. The Speaker called for order and Goodale gave it another go.

“Mr. Speaker, the minister cannot give the numbers,” he yelled, “and clearly she cannot tell the truth either.”

The government side howled, banging the tops of their desks and demanding the Speaker reprimand the opposition house leader. John Baird screamed various sentiments across the aisle.

“Mr. Speaker, the government has been in office for three and a half years, and all the crises have happened on its watch, not on our watch,” Goodale continued. “It is time to get serious. Will there be new international isotope supplies guaranteed for Canada? How many are needed and—”

Again he ran over his allotted time.

“Mr. Speaker, as the member has indicated, he says that there were not any outages and there were not any difficulties on the Liberal’s watch,” Raitt replied. “The reality is that in 2003 they understood that the world’s hope for medical isotopes, the MAPLEs 1 and 2, were not going to work. It was a case of either being ignorant of the situation or not caring themselves.”

Helena Guergis leaned forward, screaming and sneering in Mr. Goodale’s direction. The frontbench muttered and spit. Various voices from the Liberal backbench catcalled back across the way. A day that began apologetically was now wholly accusatory, the situation no less sad.