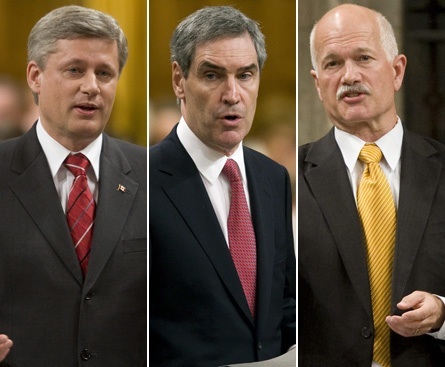 The Scene. A week short of its official start, fall has arrived in Ottawa. The leaves on Parliament Hill are turning yellow. The faces inside the House of Commons are red. The voices are shouty. The Prime Minister’s pointy finger is once more unfurled, steady and strong and accusatory. Summer is gone. The air will soon grow cold and punishing.

The easy comparison, sure, is to the return each September of young children to school. Indeed, there is something to that—the anxiousness, the chaos, the new haircuts. Lawrence Cannon sported a particularly close shave. Lisa Raitt is back to blonde. Jack Layton, not blessed of much hair to begin with, trimmed his down nearly to the scalp. When you’re trying to Make Parliament Work it perhaps helps to be as aerodynamic as possible.

Here, too, those returning rise to report on their summers. Only here the stories have less to do with amusement parks, video games and family trips to major American landmarks.

“Mr. Speaker, this summer I took the opportunity to travel to every area of Kootenay-Columbia, talking to my constituents and taking pictures with them hard at work on projects and programs funded through Canada’s economic action plan,” Jim Abbott reported when called upon first. “The Conservative government has been getting shovels in the ground and projects energized for the benefit of all my constituents. We have multiplied the effect of our economic initiatives by using a very wide variety of programs. From one end of the riding to the other, I heard people voicing cautious optimism. They appreciate our economic action plan and what it means to their families and our communities throughout Kootenay-Columbia. As we work our way out of this worldwide recession, my constituents give the Conservative government an A-plus.”

Oh, but not all was bliss for Mr. Abbott this summer. There were some frightful nogoodniks who wouldn’t let him run and skip and play in peace.

“However, without exception, they are angry with the useless, counterproductive, dangerous, opportunistic election talk by the opposition coalition,” Abbott moped. “My constituents give a massive F for failure to the Liberal, NDP and Bloc coalition.”

Six-year-olds across the country cackled at this well-played put-down. Take that, nogoodniks.

But enough with the elementary school analogy. If only because it demeans this place. Or our children. Or possibly both.

A series of Conservatives followed, similarly laughing and crying as told.

“Mr. Speaker, as MP for Oakville, I report back to the House of Commons today that in these challenging times the residents of Oakville are very pleased that their government is working to create jobs and build a stronger Oakville in Ontario,” Terrence Young reported with all objectivity.

“Mr. Speaker, like many Canadians, I was shocked to see the Liberal Party’s latest attack on the Canadian flag,” moaned Rodney Weston of some Liberal pamphlet.

Jacques Gourde rose to pronounce, en francais, that Michael Ignatieff lacks the necessary “wisdom” to govern, an interesting inversion of the usual complaint that Mr. Ignatieff is too smart to possibly understand the likes of you. Such is the tricky nature of Canadian politics and our eternal search for a leader who is neither particularly bright nor glaringly stupid.

Liberal Rodger Cuzner attempted to match such stuff with some of his own. “Mr. Speaker, Canadians have learned over the past four years that if they want to know the Prime Minister’s real agenda, they have to listen to what he says behind closed doors,” he said, the government side groaned.

Conservative Brad Trost stood next. “Mr. Speaker, Canadians do not want an election,” he announced. “They want politicians to put their differences aside and focus on economic recovery.”

Indeed. And, on that note, Trost proceeded to denigrate Mr. Ignatieff and question the Liberal leader’s motivations.

Question Period commenced then with a few brief words for the latest casualty in Afghanistan, then it was back to business.

“Mr. Speaker, I find it curious that after weeks of berating the idea of a coalition, the Prime Minister seems to be hard at work forming one himself and with people that he referred to until this morning as socialists,” Mr. Ignatieff ventured. “I am just wondering whether the Prime Minister could confirm his new-found love for socialism and does he not think it prudent to change his attack ads?”

Unsurprisingly, Mr. Harper took great offense at this public questioning of his aptitude for attack.

“Mr. Speaker, the leader of the opposition is flailing around trying to invent reasons why Canadians should have another election in less than a year, four elections in five years,” he alleged. “The fact of the matter is this. The fact of the matter is that Canadians do not want an election, Canada does not need an election, an election is not in this country’s best interest. We have important economic measures before Parliament. All the parties in Parliament should be focused on those measures and on the economy and the leader of the opposition should focus on our country’s best interests.”

So invited, Mr. Ignatieff offered his take on our current economic situation.

“Mr. Speaker, just a year ago the Prime Minister promised Canada five years of surplus and then he told us that his recession would be a great buying opportunity,” he recalled. “Then he slapped Canada with a $32-billion deficit. Whoops, that went to $50 billion and now it is $56 billion and he is going to make Canadians pay for it with higher payroll taxes.

“The question is this. How can Canadians trust a government with this record? The problem of instability, Mr. Prime Minister, is you.”

The government side was besmirched. Mr. Ignatieff had made direct reference to the Prime Minister, a clear violation of the code by which this place separates itself from some of the Three Stooges‘ better food fights. The Speaker rebuked the Liberal leader and Mr. Harper proceeded with his retort.

“Mr. Speaker, Canada has been affected by the global recession that has affected every country. At the same time, Canada’s performance has been admired by many around the world. Canada is in a very strong position,” he assured. “Our deficits, while large, are, nevertheless, some of the smallest in the developed world. They are necessary to help people, but our stimulus spending must end at the end of this recession and we must return to surplus.

“I would invite the leader of the opposition, since he has yet to table any comprehensive economic agenda at all, and I have invited, since the budget last January, if he has anything to say on the economy to bring it here so we can debate it.”

Understandably, debate turned then to the important questions of “Does Stephen Harper sufficiently love our health care system?” and “Who is scarier: Glenn Beck or Bob Rae?” Mr. Rae, apparently out of practice, was thoroughly trounced on both counts, Mr. Harper delighting his flock with a pair of well-played putdowns.

By the NDP leader’s third question, Mr. Harper had lost his patience with such stuff.

“A lot of good things are being done: infrastructure projects across the country; help for the vulnerable; improvements to employment insurance benefits,” he said, once more jabbing the air in front of him. “All parties should get behind these positive things for the Canadian economy and not waste our time with an opportunistic and needless election campaign.”

That Mr. Harper could say as much with a straight face is testament surely to the fine performer he has become in his three years in office. Indeed, if Mr. Trost grievously wounded the concept, here was the Prime Minister officially bringing an end to irony. Surely we are better off without it.

Shortly thereafter, Marlene Jennings was accusing the Conservatives of harbouring deep-seeded suspicions of minorities and Tony Clement was wiggling his fingers in the air and dismissing talk of shadowy conspiracy and Diane Finley was pleading her case and Libby Davies was pronouncing the word “vitamins” with a short “i” instead of the long vowel sound. All of which kept the hour from seeming a total loss.

Out in the foyer afterwards, Mr. Layton strode purposefully to the microphone and proceeded to make non-committal noises about conciliation, if not outright surrender, for the purpose of avoiding an imminent election.

Which would surely be a shame. That this show should be restricted to the banks of the Ottawa River, reserved to this chamber, seems a great disservice to the rest of the country; the vast majority of Canadians left with nothing to look forward to but the changing of the seasons and the yellowing of the leaves.