The government reaffirms its commitment to do something or other 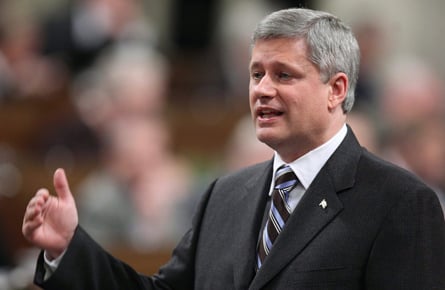 The Scene. In an effort, perhaps, to enliven the proceedings slightly, Michael Ignatieff opened with a minor flourish. Between January 2006 and May 2007, there had been, he said, a “cascade” of reports about torture in Afghan jails. One imagines a great rush of paperwork spilling over the Peace Tower, tourists frolicking in the mess at the bottom as if in a ticker-tape parade.

“It defies belief that this information never reached the Prime Minister,” Mr. Ignatieff ventured of this metaphorical waterfall. “How can anyone believe that the Prime Minister did not himself know about torture in Afghan jails and the risk that detainees transferred there would be tortured? And if that is so, how can he possibly justify his failure to act for those crucial 18 months?”

The Prime Minister stood, adjusted his left cuff and proceeded with a series of shrugs. “Mr. Speaker, once again, everybody knows that there are widespread allegations,” he said. “Taliban make allegations in every case.”

Congratulations to those of you who had “11” in the “How many words will the Prime Minister speak today before referencing the Taliban?” pool.

Mr. Ignatieff sought to get specific. “The question is whether the government will now make available to the parliamentary inquiry the documents that it needs in order to get to the bottom of this affair,” he clarified. “Why is it if the government is so sure that no detainee transferred by Canada was ever abused in an Afghan jail, it will not supply the documentary evidence to prove its case before a parliamentary committee?”

Mr. Harper sought to reassure the Liberal leader. “The fact of the matter is the government has and will continue to make all legally available information available,” he explained.

And in case there was any confusion over the phrase “legally available,” the Prime Minister next clarified himself en français.

“Mr. Speaker,” he said, “the Government will make available all documents.”

“Mr. Speaker,” Mr. MacKay said after Ujjal Dosanjh had finished with the fourth Liberal question, “as the Prime Minister has just said, all documents that are legally required will be disclosed.”

It was unclear to which legal structure the Minister was referring.

Mr. Dosanjh sought specifics. “Mr. Speaker, the Conservatives are not just withholding documentary evidence, they also sent a letter from the Justice Department telling 28 public officials to keep quiet or face possible consequences. The only official to defy the threats in that letter was Richard Colvin and he has been publicly smeared by the Conservatives for speaking out,” he explained. “Will the Minister of Justice table this and any other letters sent by his department relating to this issue? Will all of his cabinet colleagues do the same? Will they now produce all their documentary evidence in the House?”

Mr. MacKay took this one too. “Mr. Speaker, again, all documents legally required by the government to be disclosed will be disclosed,” he said. “That is what we have been doing and that is what we will continue to do.”

It was unclear whether this constituted a yes or a no.

Gilles Duceppe next got quite red in the face and rather pointy with his index finger. Then, after a short meditation on poverty, Jack Layton proceeded with the inquiry. “Why,” he wondered, “will the Prime Minister not agree to our call for a public inquiry to get to the bottom of this whole matter?”

The Prime Minister stood to pronounce the matter both closed and open. “Mr. Speaker, of course appropriate action has been taken on all these matters, and in some cases taken years ago,” he said. “Of course, once again, if the NDP and the other opposition parties are at all serious about getting to the truth, they will actually hear from those who want to testify before the parliamentary committee. There are a number. Let them be heard. What is the opposition afraid of, other than the truth?”

This was Mr. Harper’s attempt at a demure reference to David Mulroney, our ambassador in China, who has stated his intention to appear before the special committee on Afghanistan and apparently made—or will be making—the trip across the Pacific. Unfortunately, he’s not yet been actually scheduled by the committee to testify. And the NDP’s Paul Dewar, in all his earnest ambitions, has formally asked that all relevant documents be provided to committee members before Mr. Mulroney is placed before them to testify so that he might more properly be interrogated.

And so it is, apparently, that now everyone can be said to be scared of whatever it is the truth is.

Bob Rae stood last, with a slight smile, and attempted to impose clarity on the matter. “Mr. Speaker, let us be clear. No witness will ever be blocked by the Liberal party or the Liberal caucus with respect to documents. That is not the issue,” he said.

He took aim at Foreign Affairs Minister Lawrence Cannon. “Can he not commit today to doing what his colleague, the Minister of National Defence, said yesterday,” Rae asked, “and commit to releasing those documents to the committee?”

Mr. Cannon stayed seated. On his behalf stood Mr. MacKay, he who had committed to do something or other the day before.

The Minister sought first to repeat his previous assurance. “Mr. Speaker,” he said, “as has been stated many times, we will release all documents legally obliged to do so.”

He next flirted with irony. “What is interesting is these qualifications that are now being put in place by members opposite,” he ventured. “These aspersions that are being now cast upon individuals who want to come forward and testify, somehow suggesting that they are partisan.”

And he then finished with reference to Paul Chapin, a former diplomat whose dismissal of Richard Colvin’s testimony Mr. MacKay finds quite reassuring, even if Mr. Chapin is admittedly responsible for the 2005 detainee transfer agreement Mr. MacKay has lamented as both “inadequate” and “failed.”

After another question from Mr. Rae and an allegation from Mr. MacKay that Mr. Rae’s “hot breath” was “dripping with hypocrisy,” this day’s attempt to make sense of it all was done.