The Commons: Huzzah, Mr. Ignatieff asks a question that is not entirely rhetorical 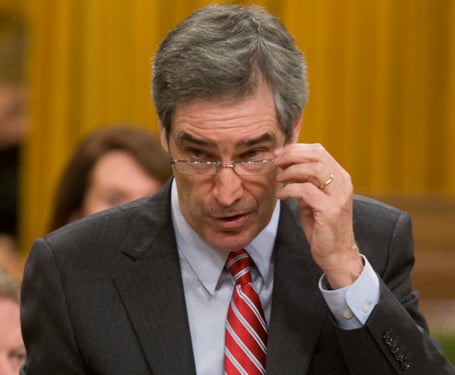 The Scene. We are—as a people, as a political class, as a town quite bored with itself—easily impressed. So it is that the Prime Minister’s overt display this weekend of something approaching personality is being roundly hailed as something approaching significance. Mr. Harper played the piano and sang. In public. And such is the state of things that, were you to judge only the reaction, you might assume he’d personally negotiated the surrender of the Taliban, or at least convinced Gary Bettman to move a hockey team to Hamilton.

By those same standards, similar huzzahs are almost certainly due to the leader of the opposition, who, let the record show, stood in the House this day and asked a question that was almost not entirely rhetorical.

This was, mere months ago, his trademark: an insistence that Question Period be something other than an exchange of slanders. Alas, since returning this fall, with a new mandate of opposition to justify, he’s been less reason and inquiry and more piss and vinegar. Take, for instance, the first of his questions on Monday, Tuesday, Wednesday and Thursday of last week.

“How,” he wondered on Monday, “are Canadians supposed to believe what today’s report says?”

“Why,” he begged on Tuesday, “does this Prime Minister have nothing to say and nothing to offer to these workers in Trois-Rivières? Why?”

“Could,” he asked on Wednesday, “the Prime Minister advise when he and his ministers plan to start bailing?”

“When,” he queried on Thursday, “will this government admit that its ideology is to weaken the Government of Canada’s ability to protect Canadians?

All good fun, no doubt. But all ultimately, and inherently, futile. Here, on the other hand, was his effort today.

“Mr. Speaker, even before the recession hit, the government had spent its way through a $13 billion surplus left by the previous Liberal government and over the past six months it has changed its fiscal projections no less than three times, each time painting a worse picture,” he began, the Conservatives howling. “Now we are told to brace for a $56 billion deficit and future deficits stretching until who knows when. With recovery stalling and unemployment rising, will the government finally admit to Canadians that it has taken this country back into a structural deficit?”

Now, sure, this was perhaps futile too—”Absolutely not, Mr. Speaker,” John Baird offered in response—but there was something here beyond on a basic assumption of government evil. Progress. Kind of.

“Mr. Speaker,” retorted Mr. Ignatieff after Mr. Baird had finished fulminating, “I think the minister is still in the yellow submarine with his Prime Minister.”

Let it never be said that reason and inquiry are incompatible with Ringo Starr jokes.

In any event, the two repeated their assertions in French and then Mr. Ignatieff rose with a thought.

“Mr. Speaker, this House is not going to get the facts about Canada’s economic situation from the government or the minister,” he posited. “So here is a thought.”

“Mr. Speaker,” responded the Transport Minister, “we have run an open and transparent government.”

The Liberal side bellowed with theatric laughter. The Speaker called for order.

“Mr. Speaker, the truth is it is this government that has put in place countless measures to ensure that we monitor public finances, to ensure that we run the country as it should be, conservatively and fiscally responsibly,” Mr. Baird continued when the proceedings were able to resume. “Every single day in this House the Liberal Party stands up in this place and demands more spending, more programs, and every time we try to put some fiscal sanity into the debate, this party can be counted on to shout it down. The Parliamentary Budget Officer, Mr. Speaker, reports to you and w, we have every confidence in you and your fine staff.”

Up next, Joe Volpe wondered if the government side might explain when the Prime Minister became aware of the plight of Suaad Hagi Mohamud and what he had done with that information. Deepak Obhrai dutifully rose and detailed the heavy workload of officials in the department of foreign affairs.

Marlene Jennings inquired as to why the Military Police Complaints Commission was having such a difficult time investigating allegations of detainee abuse in Afghanistan. Peter MacKay assured her everything was fine.

Awhile later it was Martha Hall Findlay’s turn, the Liberal apparently not assuaged by last week’s gift of an autographed picture of the Prime Minister (a good-natured response to her wondering aloud about the enthusiastic use of Mr. Harper’s image on government websites).

“Mr. Speaker, I tried last week to get some answers on government advertising. There were no answers and no numbers,” she recapped, “so I will try again and I will ask the President of the Treasury Board, because after all, he is the one responsible for the spending and he should know. How much exactly have Canadian taxpayers now paid for the government’s partisan, pat-themselves-on-the-back advertising so far?”

The President of the Treasury Board did indeed stand.

The Liberals found this particularly hysterical.

“And they laugh,” Toews scolded. “H1N1, elder abuse, the home renovation tax credit, Canadian Forces recruitment. That is what the role of government is and we will continue to do that.”

Ms. Hall Findlay was unimpressed. “Mr. Speaker, I am not exactly sure who the President of the Treasury Board thinks actually pays for government spending if it is not the Canadian taxpayers,” she said, bewildered. “I am not sure which is worse, the fact that he does not have the numbers, he does not know them or he is trying to hide something. Look at the TV campaign alone. We are talking tens of millions of dollars—forty, sixty, a hundred.

“Once in government, the Conservatives did away with the rules restricting ad spending and they have gone wild ever since. In 2007-08 they spent double what the previous government spent,” she continued. “I challenge the minister once again to give us a number. How much has this government spent on its—”

In her confusion, she’d lost track of time. The Speaker turned matters back to Mr. Toews.

“Mr. Speaker, let us deal with the issue of H1N1,” he offered. “This is an issue that all Canadians need to be familiar with. They need to understand what the risks are, what the problems are, and indeed the steps that the Canadian government is taking in order to address this issue. Members across the way continuously ask the Canadian government what it is doing, and we are telling the Canadian people directly.”

With the next question, Conservative backbencher Tilly O’Neill-Gordon rose and asked the Defence Minister about Canada’s recent commitment to fight pirates. Mr. MacKay rose and, of course, answered fully and affirmatively.