The Commons: It's all fun and games until someone else does it 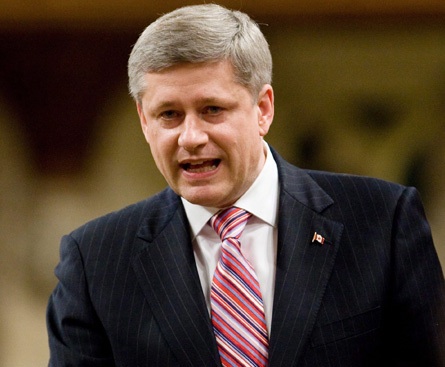 The Scene. In a return to routine, the Conservative chorus sang dutifully from the hymn book this afternoon in the 15 minutes before Question Period. A trio of otherwise silent backbenchers were sent up to lend their democratically elected voices to the cause.

It is a song that has been sung so often that only a few pay notice when another member of the government side gets up to sing. On this day, with little fury, the House proceeded directly to Question Period, Michael Ignatieff and Stephen Harper engaging in an altogether calm exchange of views on the sufficiency of the nation’s employment insurance formulas.

Alas, the peace would not hold.

“Mr. Speaker, the Prime Minister says the system helps most people. Here are some people it does not help,” Ignatieff began with his third opportunity. “In Quebec and Atlantic Canada, lobster fishermen are hurting especially hard and so are their crews. In Glace Bay, in Parsons Pond, in Shediac, collapsing prices are forcing fishermen to let their crew go. Thousands of them may not qualify for EI at all, despite what the Prime Minister says. Why is the government not fixing EI to help these Canadians in their hour of need?”

The Prime Minister was up and pointing before he’d even begun to speak.

“Mr. Speaker, the government has just announced additional assistance for marketing in the lobster industry, and we continue to meet with stakeholders in that industry to address the specific and very serious problems in that industry,” the Prime Minister yelled, jabbing at the air. “However, there are figures out today showing that in March, the number of EI beneficiaries went up more quickly than the number of unemployed. The system has been changed. People are benefiting from the system. We will be spending a lot more money on the system, but unlike the leader of the Liberal Party, we cannot be changing our minds on budgets every two or three months.”

An hour later, the Finance Minister would emerge from QP to announce a change of some $17-billion in the forecast of the government’s last budget. But let’s not get bogged down in details.

Up now came John McCallum. “Mr. Speaker, in 2003 the finance minister was a senior member of the Mike Harris government and they ran on a balanced budget. Whoops, it turned out to be a big deficit,” he reminded. “Last November he projected never-ending surpluses. Whoops again, two months later it was an $80 billion deficit, which the IMF says is now $120 billion. That is enough to wipe out all the debt reduction since Liberals balanced the budget in 1997. Why is the minister so bad with numbers?”

The Finance Minister would not rise to such taunts. Instead, to defend Jim Flaherty’s honour, here came the Prime Minister again, making a rare show of acknowledging a Liberal not named Ignatieff.

“Mr. Speaker, virtually every national government in the world is running a deficit. Ours, by comparison, remains much lower than our competitors,” he cried.

“That member, who was once an esteemed economist,” he continued, now aiming his finger in the general direction of Mr. McCallum, “should know that when interest rates are zero and we have a recession like this, and we have the strong, long-term fiscal position we have, that we put money into a deficit to make sure we are helping unemployment people in this country.”

“Mr. Speaker,” snapped McCallum, “the implication of what the Prime Minister said is to agree with the Liberal Party and increase EI.”

The Liberals congratulated themselves.

“I would also suggest that both the Prime Minister and the Minister of Finance subscribe to an excellent publication entitled Deficits for Dummies,” he continued, referring to one of Canada’s finer imaginary periodicals. “It might help them to come to some understanding.
My question for the finance minister is this. Canadians want to see the colour of his money. The deficits are soaring. The promises are soaring, but we are seeing nothing invested in communities and Canadians are not seeing any jobs created—”

His time had expired. Flaherty waved dismissively, but remained seated.

“Mr. Speaker, let us be clear,” responded the Prime Minister, now waving and chopping at the air. “When we did our prebudget consultations, the Liberal Party wanted two more weeks of employment insurance. We gave five more weeks of employment insurance plus all kinds of additional money for training, for people both on EI and not on EI. These are measures to help the unemployed in this recession. What we are not going to do is, every two or three months, come up with another economic policy, another budget until we need to raise taxes. Our deficits are affordable but they will remain short-term.”

Huzzah. The Conservatives jumped to their feet at this catchy new slogan.

Gilles Duceppe picked up the line of questioning. The Prime Minister yelled some more about fiscal policy and the general scourge of the Bloc Quebecois.

“Well,” huffed Mr. Duceppe, “we’re hearing anything and everything.”

Jack Layton tried his luck and was similarly dismissed.

“What was absolutely clear during the last election and every day since,” declared Mr. Harper with his big finish, “is there is not a person over there who has a single clue what to do about the economy.”

The government side snapped to attention again to cheer, confident apparently in their being slightly less ignorant than the rest.

Having handled the first 10 questions on his own, the Prime Minister then turned the show over to his lieutenants.

Twenty minutes later, the Speaker called on Ralph Goodale, the Liberal house leader. This was immediately curious, Goodale rarely assigning himself a spot so late in the session.

The Liberal side was delighted.

“That is a massive admission of a Conservative hidden agenda to increase taxes in this country,” Goodale crowed loudly. “When will he introduce that budget? What taxes will he increase? Who is going to pay? And by how much?”

The Conservatives howled. The Speaker begged for order.

“Mr. Speaker, I have no idea what the member is talking about,” Mr. Harper replied, next taking the opportunity to detail all of the myriad ways Mr. Ignatieff intends to destroy the country.

Goodale would not go quietly though. Indeed, back he came again to delight in this moment.

“Mr. Speaker, at exactly 2:23 p.m. in this House, earlier in Question Period, the Prime Minister said that he will not produce another budget until we ‘need to raise taxes.’ That is what he said, on the record of this House, a half an hour ago,” Goodale said, looking across the way to check the time on one of the House clocks. “It was this party that eliminated a Conservative deficit, that balanced the books, that brought down 10 surplus budgets, that cut taxes by $100 billion and left the best fiscal record in Canadian history. When is this Prime Minister going to come clean to Canadians?”

The Speaker shushed unruly members on all sides and called for the Prime Minister to respond.

“Mr. Speaker, once again I think everybody was clear on exactly what I was saying,” Mr. Harper said. “We have a party opposite that has demanded billions of dollars of spending. This government has brought in an important stimulus package. Now every two or three months, that party wants us to bring in yet another budget with yet more spending with no idea how they are going to pay for it. That is a recipe to raise taxes and not what this government will be doing, which is why nobody is going to elect them.”

A short while later, the Speaker called an end to the day’s battle. Up quick was Pierre Poilievre, the Prime Minister’s parliamentary secretary, on a point of order, insisting that his superior had been unfairly cited and demanding that the other side retract its insinuation. Goodale stood, declined to do so and, indeed, repeated himself. The Speaker declared the matter debatable and moved on to other business.