The Commons: 'Let us get beyond the rhetorical flourish'

The Conservatives plead for patience 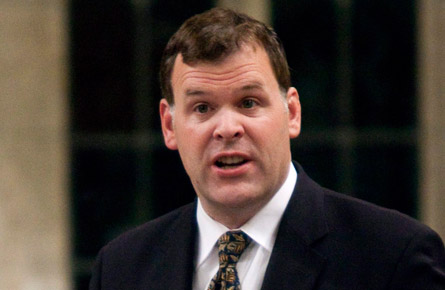 The Scene. Bob Rae stood and reviewed the allegations of obstruction, of troubles faced by the Military Police Complaints Commission and Richard Colvin. “How is all this compatible,” he wondered aloud, “with the pursuit of the truth about allegations of abuse in Afghan prisons?”

With the Prime Minister away, this seemed an appropriate time for Peter MacKay to stand and table the government’s response. Instead, here came John Baird, his relevance to this particular file unclear, professing outrage at the latest attempt of the Liberal party—a letter referencing the government’s handling of Afghan detainees—to garner funds from its supporters. “It is unwarranted,” he said, accusing the Liberals of somehow impugning the men and women of the Canadian Forces, “it is appalling and it is absolutely shameful.”

These matters surely can be tricky. Given continued concerns over a recent Conservative mailout, one wonders whether we might be nearing the day when we’d all be better off with a complete and total ban on political party’s promoting themselves at all.

There was more sparring on this between Messrs Rae and Baird before Mr. Rae attempted to identify an indisputable fact.

Indeed. Let no one—absolutely no one—ever question Gen. Hillier. Let no soul cast aspersions on the man or his work. He is a great hero, of this there cannot be any doubt. No matter what the Defence Minister has said about the detainee agreement Gen. Hillier signed in 2005 being “inadequate” and “failed.”

Ujjal Dosanjh rose next to try his luck. “Mr. Speaker, for years there has been a compelling body of evidence on the risk of torture in Afghan jails in the public domain: the U.S. Department of State, the UN, Human Rights Watch, Amnesty International, the Afghan Independent Human Rights Commission, the Red Cross and even DFAIT itself, to name just a few sources,” he reviewed. “The Dutch were so worried that they wanted to build a NATO prison to ensure the proper treatment of prisoners. Why the cover-up? Why no disclosure? Why not a public inquiry?”

The aforementioned Mr. MacKay, he of the previous declaration that “there has never been a single proven allegation of abuse involving a prisoner transferred by the Canadian Forces,” stood here and attempted once more to split the difference. “Mr. Speaker, as we have indicated a number of times, when we had credible allegations, we acted,” he said. “When we had evidence that substantiated concerns, we moved.”

The questions persisted. Gilles Duceppe wondered how two retired generals had been allowed access to government memos that are apparently the subject of national security concerns. Claude Bachand asked that the government provide Mr. Colvin with immunity to testify fully and turn over all relevant documents. Messrs. Baird and MacKay seemed not to notice.

“Disparaging remarks, rhetorical flourishes are not going to help us get to the bottom of this issue,” Mr. MacKay scolded.

Jack Layton asked if the government would order a public inquiry. Mr. Baird pledged to do something else entirely. ” Mr. Speaker, the government has been very clear. We have and will continue to provide all legally available information,” he said. “We think national security is important. We also think the safety of our men and women in uniform is paramount and that is something we will never ever negotiate on. Our government stands solidly behind our men and women in uniform and we make absolutely no apologies for that whatsoever.”

Justin Trudeau and Siobhan Coady had their turns, Peter MacKay dismissing each in kind.

“Let us wait for others,” he finally advised, “like the generals yesterday, to have a full picture of what took place during the period in question, not the partisan attacks, not the righteous indignation, not the feigned concern of the member opposite.”

His particular aspersion cast upon Ms. Coady aside, this may be the least disputable answer the Minister has offered all week.