The Commons: Lost in translation

Harper and MacKay can't seem to get their stories straight 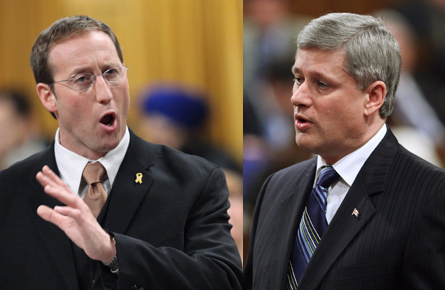 The Scene. No hair is apparently so fine it cannot be split. If Confucius did not say so, he perhaps should have.

After Michael Ignatieff had stood to open Question Period and wondered aloud about the government’s competence, the Prime Minister, making his second consecutive appearance in the House, rose and explained, en francais, as follows.

Now, as scrawled quickly in ye olde Moleskine, the House of Commons translators, they of pleasant, if harried, voices, relayed “des preuves crédibles de cas d’abus” as “proof of abuse.” For the record, the authority that is Google understands this to mean “credible evidence of abuse.” And our dog-eared 1977 copy of Cassell’s French Dictionary translates the term “preuves” as “proof; evidence, testimony.”

This may or may not matter.

“Whenever Canadian officials or soldiers have received credible reports of abuse,” the Prime Minister explained, “they have reacted and responded.”

Once more to Mr. Ignatieff. “Mr. Speaker, between January 2006 and May 2007, the government knew that torture was occurring in Afghan jails. It knew that it was transferring Afghans to those very jails, but the Prime Minister claims that no one transferred by Canadians was ever tortured,” he said. “How can he be so categorical when the government did nothing to investigate for 18 months? What kind of Canadian government does nothing to prevent torture?”

Back to Mr. Harper. “Mr. Speaker, again, on the contrary, Canadian officials and soldiers have always acted when they have had credible evidence of abuse,” he said. “That is absolutely clear.”

And yet. Here, again, is what his Defence Minister said just the other day. “Mr. Speaker, let us be clear,” he offered. “There has never been a single proven allegation of abuse involving a prisoner transferred by the Canadian Forces. Not one.”

In the meantime, the Prime Minister kept on.

Both times, to our ears, the House translators, to whom we here and now give a belated thanks for their efforts, translated the term “preuves” as “proof.”

By this time, Minister MacKay had apparently taken the hint. “Mr. Speaker, when officials at Foreign Affairs, officials at the Department of National Defence were in possession of credible allegations, they acted,” he told Bob Rae.

So there. And now how to make sense of it all?

Tomorrow will make a week since the government began its latest attempt to explain itself. One can only hope that on the seventh day we will realize the clarity we’ve been promised.