While Harper and Ignatieff enjoyed a "productive" meeting, things in the House were a bit less civil 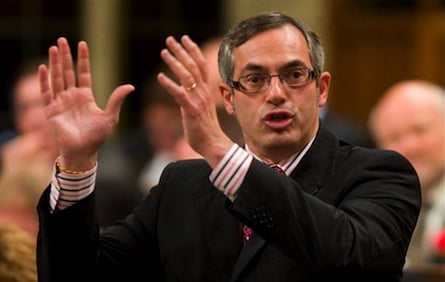 The Scene. In the sandstone bunker named for John A. Macdonald’s public works minister, a man one biography describes as having left politics in “utter disgrace,” Michael Ignatieff and Stephen Harper honoured their forefathers with a meeting. According to one account, Mr. Ignatieff entered the building, home to the Prime Minister’s Office, around 2pm and exited about five minutes after three. A Canadian Press reporter on the scene claims the Liberal leader left through the Elgin Street exit, skillfully avoiding said reporter’s attempt to question him.

Requests for details of the proceedings would not go completely ignored though. Indeed, in short order there were identical statements from those assigned to speak on behalf of both men. The meeting was described as “productive”—a word that would seem to indicate there was a minimum of swearing and likely a complete lack of physical violence. There are vague promises, as of this writing, that the two will meet again later today. The adjective used to describe those discussions will surely be the subject of intense negotiation.

Across the street and up the hill, the business of Parliament was compelled to proceed without them. And not yet sure of how “productive” the negotiations would be, the parties of Messrs. Ignatieff and Harper were compelled to loudly and forcefully make their claims.

It began, as it usually does, with a nod in the general direction of productivity. “Mr. Speaker, in a reasonable and measured way the leader of the opposition raised four important issues yesterday. The Prime Minister responded by offering a meeting which is taking place now,” Ralph Goodale reported to the House.

“The issues were these: the isotope crisis, employment insurance improvements, the federal deficit and actual spending on infrastructure,” he continued. “On this latter point who in the government has a complete tally of actual infrastructure expenditures to date, not just announcements or promises or wishful thinking but hard expenditures already made? Who can give those numbers specifically?”

What followed, of course, was complicated, evasive and more than a little inflammatory.

“We need only go to actionplan.gc.ca to see 3,200 projects in various stages of implementation and not just on the side of stimulus spending for infrastructure,” he continued. “There is an extra $10 billion that we have announced that we are now in the process or our partners are in the process of hiring the construction workers, the architects and so on.”

Then, a parting shot.

It is on such language, of course, that the most productive of working relationships are based.

“Mr. Speaker,” observed Mr. Goodale, not one to miss a detail, “the minister still cannot give the numbers.”

The Liberal house leader moved next to engage the minister on the shame to which he referred. Yesterday, the government side claimed that any election would bring to an immediate halt any and all spreading of federal aid, an end to the stimulative building of parking spaces, small town libraries and hockey rinks across this great land. Shortly thereafter though, one of those meddlesome members of the press gallery had placed a call to the treasury board and learned that some 92.9 per cent of necessary funding had already been approved and was ready to go.

Asked to admit as much, Vic Toews, president of the treasury board, rose to strenuously disagree with the estimates of his own department. “Mr. Speaker, Canadians do not want an election. Neither does our government,” he offered. “If the opposition votes to bring down our government negotiations on infrastructure contribution agreements between the various levels of government will immediately cease.”

And so the abomination was apparently now a hostage crisis.

Whatever soft and reasonable tones were being used inside Langevin, the discussion in the Commons was now a test of vocal range. Vic Toews yelled his condemnation, his pointy finger not quite as impressive as Mr. Harper’s, but sufficiently accusatory in the moment. Goodale, he of broad shoulders and wide cuffs, blustered and boomed and glared, the human equivalent of a bullhorn.

“Mr. Speaker,” Goodale observed, “that answer is only a confession of incompetence.”

“The opposition members are being irresponsible,” responded Toews. “Shame on them!”

Denis Coderre, added his baritone to the debate. Toews barely paused to breathe in response. Coderre shouted something about Canadians dying of hunger for lack of employment insurance benefits this summer. Diane Finley promised to get back to him in the fall. Gilles Duceppe stood and put all weaker voices to shame, his white hair nicely bringing out the maroon in his face.

Jack Layton took his turn, compelling Clement to get back on his feet and wave his arms all about, conducting again that imaginary orchestra in his head. David McGuinty posited a couple of terribly specific questions on the isotope shortage, Leona Aglukkaq and Lisa Raitt combined to duet on a hymn of perfect generalities. Jim Flaherty stood to explain away the federal deficit, Marlene Jennings’ unbroken stream of invective broke his concentration.

“Mr. Speaker, I can hear the member for Lachine,” he said. “She might want to listen so she will understand what is going on in terms of the deficit.”

Jennings took the opportunity to inform the Finance Minister that her riding was fully known as Notre-Dame-de-Grâce—Lachine. So there.

Nearer the end, Thomas Mulcair rose full of frustrated principles and made some insinuation about Mr. Ignatieff’s attitude toward his fellow citizens. No one seemed to understand entirely his point, but it seemed intended as an insult. And Mr. Baird made a great show of taking offense.

“Mr. Speaker, I will not engage in such harsh language when it comes to my leader of the opposition,” he admonished to fits of laughter from the government side. “My leader of the opposition is right now working with my Prime Minister to do the right thing for Canadians, to make things happen, to create jobs so we have just a little more hope and a little more opportunity in this country.”

No doubt with such obviously sincere expressions of conciliation echoing through the House, the signing of a deal tonight inside the hallowed halls of Langevin is but a foregone conclusion.

The Stats. Employment, 10 questions. The economy, Chalk River and aboriginals, four questions each. The federal deficit, Bisphenol A, government expenditures, product labelling and trade, two questions each. Taxation, forestry, fisheries and pensions, one question each.