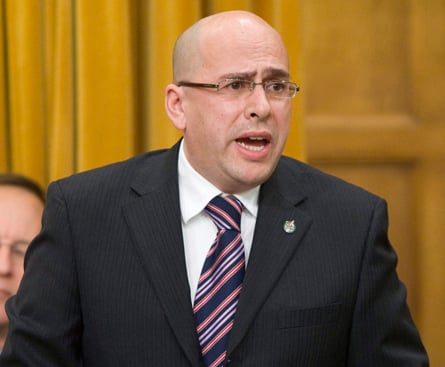 The Scene. Nothing quite calms the barroom atmosphere of an afternoon in the House of Commons quite like death. Or, in this case, the theoretical possibility of same.

So that silence descended today once it became clear that Todd Russell (left) was opening Question Period with something of such seriousness.

“Mr. Speaker, imagine that you, your child or your grandmother has H1N1. Imagine people who live in fear at the spread of this disease. Imagine being a community leader or health worker pleading for help, trying to prepare and too often doing so on your own,” he began, speaking evenly and deliberately. “What message does it send a person, their people and their community when the government will not send medicine but will send body bags? Will the Minister of Health own up to her responsibilities and apologize for this shameful incompetence?”

There were some grumbles and groans from the government side.

The Health Minister was otherwise engaged, so it was John Baird sent up to offer a response.

“Mr. Speaker, I totally agree with the member for Labrador,” he said. “What happened in recent events is unacceptable. It is incredibly insensitive and offensive. The Minister of Health has ordered her department to conduct a thorough and immediate inquiry into this matter and the results of that inquiry will be made public.”

“Mr. Speaker, the body bag incident was indeed callous. It was disrespectful and insensitive. It brings to mind an episode from history in my own riding,” he said. “There was an influenza outbreak. The colonial government at the time did not send help. It did not send medicine. It sent planks to make coffins and bury the dead. That was 90 years ago. I would have hoped, as all Canadians would have hoped, that things have changed. How can First Nations, Inuit and Métis communities trust their health and well being to the government? How can any Canadian trust their health and well being to the government?”

More grumbles, but more agreement, of a sort.

“Mr. Speaker, I again agree with the member opposite. It was unacceptable. It was incredibly insensitive. Indeed, it was offensive,” Baird offered. “The Minister of Health put out a statement earlier today in which she was very clear that she finds this act to be totally inappropriate. She has ordered an inquiry from her department. She is incredibly concerned about it and we will make the results of that inquiry public for all parliamentarians and all Canadians.”

Then it was Anita Neville’s turn. “Mr. Speaker, last spring, the Minister of Indian Affairs and Northern Development visited Island Lake, Manitoba. What did he see? He saw limited water facilities and overcrowded, mouldy homes. What did he do? He did almost nothing,” she reported. “The communities were soon hit with H1N1. They waited and waited for help. Little real help came, but body bags came. Will the outcry over this shameful response force the government to get serious about the real need of Manitoba’s aboriginal communities?”

From the government side, Vic Toews and Gary Goodyear heckled.

Chuck Strahl took up the Conservative cause. “Mr. Speaker, we share the outrage at what happened just recently with this incident. It was insensitive, of course. It was objectionable and it understandably got the reaction it did from the chiefs and communities involved,” he said. “We have an extensive program. For example, we announced $330 million in the budget for waste water treatment. We have announced additional funds for housing, both in the stimulus package and in the regular funding. We are working with First Nations to do more to address some of these root causes.”

There were grumbles from the Liberal side. Marcel Proulx picked up the questioning, taking aim again at government efforts. Mr. Strahl was no longer willing to hold fire.

His government mates stood to applaud his effort.

After four rounds from the Bloc Quebecois on continental trade, Jack Layton resumed the discussion.

“Mr. Speaker, imagine how the chiefs, the leaders and the nurses must have felt when they opened up what they thought were going to be H1N1 kits and they found body bags, 30 of them in Wasagamack First Nation, 20 of them in God’s Lake First Nations, more in other communities,” he said. “As the chief of the AFN told me today, it demonstrated a disturbing lack of respect for First Nations, Métis and Inuit people and their leaders. Body bags will not halt the spread of the virus. It will not stop the disease. These communities need help and I would call on the government to explain when it is going to start working with the leadership.”

A Liberal voice called out for an apology, an obviously futile request. An apology is an admission of fault, a demonstration of weakness. And, as such, it is of absolutely last resort for a politician.

Mr. Layton suggested the government was better prepared to bury the dead than deal with the flu, the Conservative members howled in protest. John Baird appealed for some decency. Mr. Layton returned to his feet undaunted.

“Mr. Speaker, let us stop the excuses here,” he shot back. “There is no plan for assisting these communities to deal with the H1N1 crisis. That is the problem. If the government wants to respond to the situation of the body bags, then bring forward a plan, put it here so people can know what it is, but more importantly, be in touch with the First Nations leadership of this country that are waiting to work with the people in their communities to prevent the spread of this terrible disease. Where is the plan? Put it on the table. That is the best response to the situation we are facing now.”

John Baird responded once more. “Mr. Speaker, neither the minister nor this government offers any excuses. What happened was inexcusable and the minister is pledging on behalf of all Canadians to get to the bottom of it,” he said. “As we speak, the Minister of Health is meeting with her provincial and territorial colleagues to work on dealing with this challenge. In a statement earlier today she said: ‘There is strong cooperation taking place with First Nations people, with the community regional and national levels as well as with the provinces and territories to ensure that all Canadians are informed and protected from H1N1 virus and as Minister of Health I am fully committed to those efforts.’

“The people of Canada can depend on this Minister of Health to get the job done.”

With that, the House moved to sparring over who precisely was to blame for the country’s failure to adequately care for the unemployed, the familiar ruckus returning to this place.