The Commons: So much to answer for

From the deficit to asset review to Canada Pension, all arrows were aimed at Flaherty 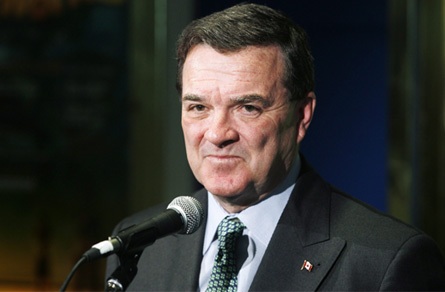 The Scene. The good news for the Finance Minister was this: a full 45 minutes of Question Period passed this day without a single query about a federal deficit that may now be on track to total upwards of $170 billion. Not until after QP, surrounded by reporters, did the increasingly gaping hole in the national treasury come up. At which point, Jim Flaherty’s response was as follows.

“Well, you know, economists at TD and economists at the other banks are entitled to their view. I’m sure different economists will have different views. All of them were on average more optimistic than I was in the budget in January but they’re on the low side of the private sector forecasters right now.”

Er. Well, don’t get too worried about that $170 billion then. Indeed, it could be worse. For sure, it might be worse.

That though will be for whoever the Finance Minister is in 2014. Mr. Flaherty, no fool, will have surely bequeathed the position to someone else by then. Denis Coderre, say. Or Thomas Mulcair. Or Pierre Poilievre. Or whoever Prime Minister Gilles Duceppe decides to let handle the books.

In the meantime, the bad news for Mr. Flaherty was this: even without, apparently, the time to prepare some questions about our increasing indebtitude, the opposition still arrived for Question Period ready to press all sorts of issues said to demonstrate some failing or another in the minister.

First to get Mr. Flaherty on his feet was Gerard Kennedy. The feisty Liberal, citing an official-sounding report, suggested that, despite what you might’ve heard about that $170-billion deficit, the government wasn’t spending its money particularly wisely.

The Finance Minister attempted to dazzle him with official-sounding jargon. “Mr. Speaker, the newspaper report that the honourable member refers to is misleading,” Flaherty began simply. “Federal government spending actually has increased. Relative to the last quarter of 2008, federal spending increased by $1.5 billion, or 2.4 per cent, on an annualized basis. What was different was that we had lower debt charges in the first quarter due to lower interest rates, and that had a significant dampening effect on growth, but spending on programs rose over $3.2 billion, or 6.2 per cent, in the first quarter of 2009, relative to the last quarter of 2008.”

Kennedy tried again. “Mr. Speaker, it was the Finance Minister, on January 27, who said it was absolutely essential to get the projects going and the money flowing within 120 days; four months,” he shot back. “The deadline has come and gone, and all Canadians have to show for it are photo ops with Conservative ministers.”

Across the way, Gary Goodyear started to clap, then, finding himself alone in this regard, thought better of it.

“The construction season is well underway, but instead of funding speeding up it has slowed down and no jobs were created,” Kennedy continued. “Canadians need to know if it is because the Finance Minister is wrong or because the minister responsible for infrastructure is incompetent, or both.”

Oddly, Flaherty did not concur. “Mr. Speaker, if we look at the unprecedented investments made in every region of this country, it is indeed impressive,” he said. “We saw just today the Minister of Public Works in Quebec announcing a deal where some $2.75 billion will be spent to help create jobs in the province of Quebec.”

And if not for such efforts, just imagine what dire straits the giant novelty cheque industry would be in right now.

The Bloc next wanted to know about another report, this one suggesting that the Finance Department was actively wondering whether it should sell the CBC, up to and including George Stroumboulopoulos’ soul patch goatee.

“Mr. Speaker,” responded Mr. Flaherty, “in the budget we announced an asset review which did not include Heritage Canada, which is responsible for the CBC.”

Ralph Goodale stood and wondered if the minister could explain why various auto dealerships in Saskatchewan were struggling to attain commercial credit.

“The reality,” Mr. Flaherty observed, “is there are some auto dealerships in the country that are at excess capacity as we have seen with respect to General Motors.”

“Mr. Speaker, last fall, the government failed to deliver a serious fiscal plan to deal with the recession,” he began. “Worse, it attempted to hide the fact that it had already returned Canada to deficit by booking a $4-billion fire sale of Crown assets. Now we learn every major Crown asset is on the Conservatives’ chopping block. Will the government disclose its criteria for this review and guarantee that this is not an ideological mission to dump institutions such as the CBC, VIA Rail and Canada Post? After all, they were all on the Prime Minister’s hit list when he was the head of policy with the Reform Party.”

“Why can’t you be more like your brother?” chirped John Baird from the front row.

“Why can’t you be more like a minister?” snapped a Liberal in Baird’s direction.

“We just want to sell you off,” quipped Jeff Watson.

“Mr. Speaker, I know the member must have read the economic action plan because he voted for it,” Flaherty replied, perhaps getting a bit impatient now. “If he has forgotten, then perhaps I can remind him that in the economic action plan that he voted for, we set out an asset review. The first stage of the review will specifically focus on the following departments: finance, Indian and northern affairs, natural resources, transport and infrastructure portfolios. Not Heritage Canada.”

Recognizing this as only sort of an answer, McGuinty tried again. Flaherty made a second claim to fiscal prudence.

Then a Conservative was up, lofting a friendly question at the minister about the multi-million-dollar compensation provided to the board of the Canada Pension Plan. Flaherty stood and advised that he had sent the board a letter asking the chair to ensure that everything was more or less cool.

This was not good enough for the NDP’s Thomas Mulcair.

“Mr. Speaker, in order to help the minister assess the response, I might want to bring the following facts to his attention,” he began, innocently enough. “The CPPIB lost $24 billion. The members gave themselves multi-million-dollar bonuses because they say it is based on a four-year rolling average, but they did not even beat inflation over those four years. In fact, the United Church Pension Board, a multi-billion dollar pension, an all-volunteer board, outperformed them to 2:1. If it had invested exclusively in government bonds, it would have made $13 billion more over the past 10 years.”

Mulcair was in full frantic flight. “I hope that helps him,” he concluded. “How much does the CPPIB have to lose before he finally says ‘no?’ ”

After Mr. Flaherty offered him a perfunctory response, Mulcair moved on to the compensation claimed by executives of the recently bankrupt Nortel. “Mr. Speaker,” responded Flaherty, “pension regulation of Nortel is the responsibility of the provincial government not the federal government.”

To close the show, the NDP turned matters over to Pat Martin, the perfectly manic member from Winnipeg. Here, then, would be the climactic drama.

“Mr. Speaker, France would not sell the Eiffel Tower any more than the United States would sell its Statute of Liberty,” he moaned, shaking his fist, then waving his arms. “We now have learned that every Canadian institution by which we define ourselves as Canadian is on the auction block, or should I say the government’s hit list. The Royal Canadian Mint, the CBC, VIA Rail are on that list. The government might as well hang a billboard on the Peace Tower that says ‘Fire Sale. Going out of Business. Everything Must Go.’ ”

From the far end of the room, he lamented all he could see.

“It is a poor business manager who tries to balance the books by selling off everything of any value,” he finished, attempting an appeal to reason. “Will the government not just admit that this fire sale of assets is more about ideology than it is about economics?”

“Mr. Speaker, on a housekeeping note, I am concerned about the quality of the sound system in this place,” Flaherty quipped. “This is the third or fourth time this question period that I have pointed out that if anyone wants to read the budget, Canada’s economic action plan, which is a wonderful book, they would see that Heritage Canada is not listed in the asset review for this year.”

At that last qualifier, the Liberals cried, “A-ha!” They had him, they figured. But by then Question Period was all but over, Flaherty having escaped to see another day.