Back in Ottawa, the opposition seemed unpersuaded by Harper's assurance that we are "on the right course." 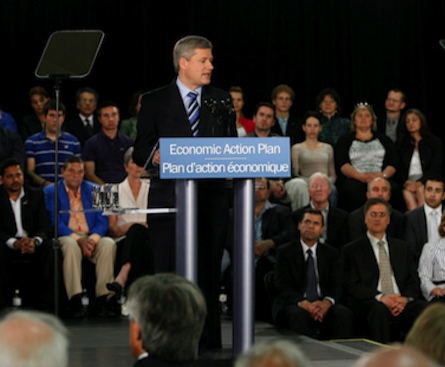 The Scene. Stephen Harper is not one to leave well enough alone. So having spoken hopefully of his government’s plans to build parking spaces in the Toronto suburbs, a pedestrian overpass in Surrey and a library in Weymouth, his voice switched to a more ominous tone and his pointy finger started wagging near the bottom of the television screen.

He took direct aim at the Liberal leader, informing the viewing public that his rival had vowed “unequivocally” to raise taxes—news that will surely come as some surprise to even Mr. Ignatieff. He bemoaned the boogie men and women of the opposition who continue to insist their majority of seats in the House of Commons holds sway over his 37 per cent mandate. And he warned that only “needless political instability” could harm us now.

The Prime Minister does like to make dramatic-sounding pronouncements. Take, for instance, that moment in late September when he said “the only way” the country would fall into recession was if we were collectively crazy enough to choose Stephane Dion over him. Or that editorial, published on election day a few weeks later, when, with the stock market gone wobbly, he vowed “never” to take the country back into deficit.

Of course, you’ll forgive him if those assertions now seem a bit silly. Indeed, it is entirely unfair to impose the consistency of actual reality on Mr. Harper. A bit like asking Al Pacino to play the same character in every one of his movies. Though perhaps that’s a bad example.

On the matter of needless political instability, the Prime Minister can at least claim some expertise. Indeed, having promised neither a recession nor a deficit, Mr. Harper returned to Ottawa last fall not quite ready to acknowledge either. Having to seem though like he was doing something, he offered to bankrupt the opposition parties. What would come to be called an “unprecedented democratic crisis” ensued. He identified his opponents as enemies of the state, then kindly asked the Governor General to shut down Parliament so that he might avoid losing a confidence vote. In a recently published book, a collection of academics spend several dozen pages agonizing over it all. (Six months later, with his poll numbers in Quebec described as dismal, news comes that he’s hired a disciple of Lucien Bouchard to sell francophones on the Conservative cause, thus officially exhausting irony as a concept.)

Nonetheless, by the end of January, Mr. Harper was ready to deliver a budget. It included a 120-day deadline on stimulus spending and a $34-billion deficit, neither of which are still acknowledged.

So it was that Mr. Harper retreated today to the comfort of the sort of scenery in which he campaigns, staging an infomercial in Cambridge with your special guest host Senator Mike Duffy, the former newsman now flirting rather aggressively with self parody. The speech, with a representative sample of Typical Canadians arranged in the background, was a sturdy review of recent government press releases. Mr. Harper was to take a few, surely unscripted, questions afterwards, but both news networks cut away, each apparently taking more interest in the WHO’s announcement of a swine flu pandemic.

Five hundred kilometres to the north, in the traditional (which is to say old-fashioned, which is to say antiquated) arena of our democracy, opposition members remained insistent in their right to ask altogether uncomfortable questions. All seemed entirely unpersuaded by Mr. Harper’s assurance that we as a people are “on the right course.”

David McGuinty led the day with two questions about our medical isotope shortage, then one about recent swine flu outbreaks in aboriginal communities. The Bloc asked how much of the government’s announcement spending had actually been spent and why the Prime Minister would be waiting until the fall to consider fixes to the employment insurance system. Gentleman Jim Flaherty, left behind by Mr. Harper’s travelling road show, stood to bravely declare his economic efforts to be the envy of the world.

Then Jack Layton rose to speak, the NDP leader knowing a thing or two about putting on a good spectacle.

“Mr. Speaker, holding some kind of weird Mike Duffy Live show instead of reporting to the House will not change the facts,” he ventured. “The fact is that the money is not flowing. The minister should not ask me. He should ask the mayors. At the FCM convention in Whistler, they were very clear on this. The mayor of Kitchener said that most stimulus projects are still waiting for approval. The mayor of Toronto added that although there has been announcements, very little money has hit the ground.”

His time expired and the Speaker turned the proceedings over to John Baird. The Transport Minister proceeded to reannounce one of his recent announcements, then accuse the NDP of either “negatism” or “negativism” (the transcript records the latter, this ear heard the former).

Mr. Layton though was in a happy mood, barely able to keep from laughing. “Mr. Speaker, the Prime Minister is holding some kind of gong show outside of the House of Commons instead of being here to answer questions,” he said next. “He had the gall to slap a windmill on his propaganda. Is that some kind of joke? A windmill? This is on the day when we learn from this infamous tape from the Minister of Natural Resources that the money earmarked to support wind energy was transferred, guess where? No surprise, to the oil patch.”

Jim Prentice, the environment minister, declared himself deeply offended by Mr. Layton’s tone. “Mr. Speaker, you should tell the honourable member what should not be happening is the nonsense he is spreading in the House of Commons,” he said.

Then it was back to difficult questions for which the government could muster no snappy retort. Save, of course, for Lisa Raitt’s periodic assertion that much of everything that currently ails us can be traced back to Ralph Goodale.

“Mr. Speaker, today and every week day in Canada three families will sit in their doctors’ offices and be told that their child has cancer,” reported Liberal Carolyn Bennett. “Eight hundred and fifty children are diagnosed every year, 135 will die. The parents will be told that the prognosis and treatment will depend on the results of a bone scan. Bone scans for children require technetium 99. There is no safe alternative. Will the minister guarantee that the children with cancer will get the scans they need when they need them?”

Rising to respond, Leona Aglukkaq fell well short of such a commitment. Ms. Bennett was displeased. “Mr. Speaker, the minister has to stop misleading Canadians,” she charged. “There is no plan.”

Ken Dryden invoked the concerns of a patient diagnosed with cancer. The Conservative members, typically quick to mock the big goalie, kept quiet. “The minister talks about all she is doing. The Minister of Health talks about using alternative treatments. They make it sound as if one plus the other is the answer, not just the best answer they have but the full answer for me, the patient,” Dryden said. “However, the medical experts tell us in spite of what they are doing, we have a crisis, that the one plus one of the ministers does not equal two and I, as the cancer patient at home, has to live in the shortfall. As that patient, tell me where I stand.”

Ms. Aglukkaq pitched him on the qualities of thallium and sodium chloride.

For good measure, Pat Martin wondered aloud about this country’s exporting of asbestos. “Mr. Speaker, more Canadians die from asbestos than from all other occupational diseases combined, yet Canada continues to be one of the largest producers and exporters of asbestos in the world. We will not use it ourselves, yet we dump over 200,000 tonnes per year into underdeveloped nations,” he reported. “Without exaggeration, we are exporting human misery on a monumental scale. Canada’s asbestos policy is morally and ethically reprehensible. How, in all good conscience, can the Minister of Natural Resources continue to promote and subsidize this deadly industry?”

In the middle of it all, an exasperated Geoff Regan had stood and begged. “Mr. Speaker, these are straightforward questions,” he huffed. “And Canadians are entitled to straight answers.”

Mr. Regan was being unreasonable. And so long as he persists in this thinking, the Prime Minister is well-advised to stay as far away as possible. Indeed, what with the portability of television technology these days, he need not necessarily ever return.

The Stats. Chalk River, 14 questions. The economy, eight questions. The environment, four questions. Swine flu, employment, aboriginals and asbestos, two questions each. The Congo and fisheries, one question each.