The Commons: Swallow this impressive-sounding number and call your doctor in the morning 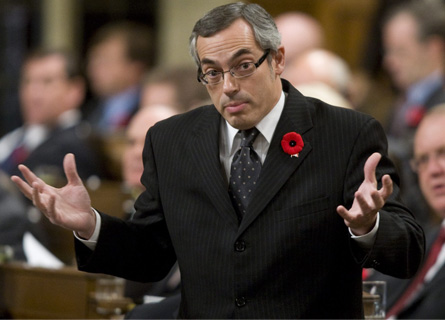 The Scene. The Prime Minister’s chair, as an inanimate object, was unlikely to answer. But Michael Ignatieff insisted on asking anyway.

“Mr. Speaker, today we learn from the Auditor General that, for its entire time in office, the government has failed to develop any national emergency preparedness plan. That includes planning for epidemics and pandemics like H1N1. Does that not begin to explain why the government’s response to this crisis has been so slow and confused?” he wondered aloud. “We have heard from the Minister of Health. When will we begin to hear from the Prime Minister? When will he stand up, take responsibility for the government’s mistakes and correct the situation?”

The Prime Minister was otherwise engaged with escorting the Prince and Camilla around rural Newfoundland. John Baird, Mr. Harper’s de facto deputy, was away as well, while the Health Minister was in Vancouver. No worries though, because this seemed to be a question about emergency preparedness and that is distinctly the purview of the Public Safety Minister and that minister, the typically unshy Peter Van Loan, was most certainly in his seat.

And yet, here came Tony Clement, the Minister of Industry and master flailler of arms.

“Mr. Speaker, let me dwell in the realm of facts,” Mr. Clement boldly offered. “The fact of the matter is that there have been six million doses of H1N1 vaccine that have already been delivered to the provinces and territories.

“That’s what you said yesterday!” lamented a Liberal.

“We currently have more H1N1 vaccine per capita than any other country in the world,” Mr. Clement reviewed. “The vaccine is being distributed as quickly as it is being produced and there will be sufficient H1N1 vaccine available in Canada for everyone who in fact needs or wants to be immunized.”

Michael Ignatieff returned to his feet, generally unpersuaded. “Mr. Speaker, if there is all this vaccine about, why are there eight-hour lines?” he asked. “Nobody can understand the gap between what the minister is saying and what Canadians are actually experiencing.”

Back to Clement, tending as he generally does to turn toward the sympathetic and supportive faces of his own caucus to plead his case. “As I said,” he said, “over six million doses have been distributed to date.”

He switched back to English for a parting expression of disappointment. “I hope that the honourable member is not trying to politicize the issue,” Mr. Clement moaned, “because that would surely be beneath him.”

This drew groans from the opposition side.

Kirsty Duncan stood next for the Liberals and presented the Minister with a series of questions—”Where is the Prime Minister on this issue? Why has the Prime Minister not spoken directly to Canadians to reduce their anxiety, confusion and mounting frustration? Why has he not made available the $400 million from budget 2006 for pandemic response? How did the Conservative government get it so wrong?”—that momentarily distracted Mr. Clement from his impressive-sounding number. By the time Jack Layton had picked up the line of inquiry, the Minister had steadied himself.

Bernard Patry stood and wondered why the government had chosen to rely on a single supplier for its H1N1 vaccine.

Carolyn Bennett gave it a try on the same point.

“We have allowed to be distributed six million doses,” Mr. Clement revealed.

Brian Murphy wondered why the government had spent so much more money advertising its economic efforts than educating the population about H1N1.

Mr. Murphy was demonstrably unimpressed, loudly and indignantly wondering what he should tell a constituent who has been unable to get his young children vaccinated.

“Mr. Speaker,” recommended Mr. Clement, “I would encourage the honourable member and honourable members opposite to speak about the realities like six million doses already being distributed.”

The follow-up question from Wayne Easter—”Mr. Speaker, how could that minister be so pompous?”—was sufficiently unanswerable. So too was a question posed later to Mr. Van Loan by the NDP’s Judy Wasylycia-Leis. “Why,” she wondered, “can the government not get its act together?”

After the Public Safety Minister had dismissed that, the NDP member tried once more, prompting the return of Mr. Clement.

“Mr. Speaker, what Canadians care about is the availability of the vaccine,” he ventured. “Six million doses have already been distributed throughout the country, through the provinces and territories, and that is enough vaccine for all of the priority groups. That is more per capita than any other country in the world. But we are not resting on our laurels. We continue to distribute the vaccine as it is produced. That is our role and responsibility, along with the provinces and territories. We are working with the public health officials. That is what people expect of us and that is what we are doing.”

Though perhaps you heard him the first dozen times.

The Stats. H1N1, 20 questions. Employment, six questions. The federal deficit, taxation, the environment and immigration, two questions each. Credit cards and the Parliamentary Budget Officer, one question each.