The Commons: 'Tell the truth!'

The Liberals may have statistics on their side, but the Tories have a Liberal 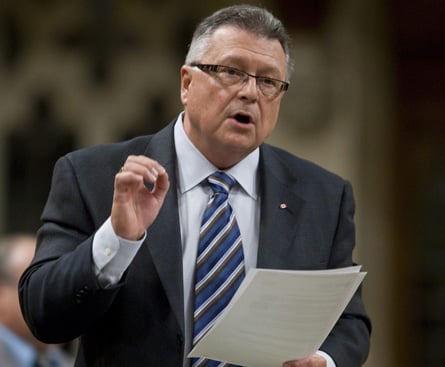 The Scene. Ralph Goodale stood, broad and booming, with a particularly provocative turn of phrase.

And you needn’t apparently take Mr. Goodale’s word for it.

“Three independent investigations confirm the research of the member for Parkdale-High Park,” he continued. “A shocking part of the stimulus plan is earmarked for partisan Conservative purposes. Will the Conservatives admit this is a threat for those who didn’t vote for them?”

The Prime Minister stood, apparently quite confused by the Liberal house leader’s tone.

“Mr. Speaker, the program for the reconstruction of leisure facilities is a very important measure for the Canadian economy and for communities. I do not understand at all why the Liberal Party of Canada opposes such projects and, even in their own counties. The allegations of the honourable member are quite untrue and, indeed, the Liberal deputy premier of Ontario said so.”

Such is the week here in Ottawa. On Monday, the government proclaimed Jean Chretien its guiding light. Now it takes solace in the assurances of George Smitherman, a top minister in the Ontario government of Dalton McGuinty, a premier once denigrated by one of Mr. Harper’s cabinet ministers as the “small man of confederation.”

Mr. Goodale, filling the chamber with his emphatically pronounced syllables, was not persuaded.

“Mr. Speaker, what the Conservatives have done here is cheating pure and simple and it gets worse,” he said.

The government side howled at the allegation, a couple of Conservatives gesturing for the Speaker to reprimand this remark.

“The Liberal Party should welcome the continuing good news we are hearing about the Canadian economy,” The Prime Minister lamented, “rather than complain about it.”

Mr. Goodale seemed not to have taken away from the morning papers the same sense of optimism.

“Mr. Speaker, the Conservatives taint themselves with their abusive tactics. Corrupt advertising, phony cheques, partisan logos, billboards on doorknobs, untendered contracts, worst of all the twisted distribution of infrastructure money to discriminate on a partisan basis against millions of honest, hard-working Canadians,” he said. “Why, for example, is a disabled child in Dartmouth worth less to the government than such a child in Whitby? Why?”

From the groan that arose, it seemed the government side found this question most unfair.

“Mr. Speaker, I guess when he is stuck in a party that is talking only to itself he can whip himself into that kind of lather,” the Prime Minister mocked. “I see this allegation, for instance, that RInC moneys have been distributed in a way that discriminates against Liberal ridings. This of course is a list of projects agreed to with the provincial Liberal government of Ontario and the Deputy Premier Mr. Smitherman says himself there is no such discrimination.”

And let it never be said that Mr. Smitherman is unwilling to speak truth to power. Indeed, just a year and a half ago, he was summing the Harper government as an administration going “from scandal, to scandal, to scandal.” And let it furthermore never be argued that this great recession hasn’t been without its blessings. For one, quite obviously, it has brought bitter rivals together. For another, apparently, it has not killed irony.

Undaunted as usual, Gerard Kennedy, a former cabinet colleague of Mr. Smitherman’s in a previous incarnation of the Ontario government, stood awhile later to pursue the matter further.

“Sit down!” yelled one Conservative.

“Mr. Speaker, I want to ask the Prime Minister why he is letting his ministers abuse their government authority on infrastructure spending,” Mr. Kennedy said. “The people of northern Ontario who have been hard hit by the economic downturn are being shortchanged so his Minister of Industry can give a double helping to his riding and that of the other Conservatives in the region.”

“Tell the truth!” encouraged a voice from the Conservative side.

“Can the Prime Minister explain to hard-working unemployed people elsewhere in the north why he thinks they are only worth half as much assistance as those in his Conservative ridings?” he asked with the first of several questions. “Will the Prime Minister discipline his ministers, will he make them start treating Canadians fairly or are they just doing what he wanted them to do in the first place?”

The Prime Minister stayed seated. Up, instead, came Tony Clement, flapping his arms in an apparent attempt to take flight.

“Mr. Speaker, of course the recreational infrastructure projects, as well as all the other infrastructure stimulus, are designed to help Canadians across this country, northern Ontario, southern Ontario, all across the country, to make sure that they can participate in the economic recovery,” the Industry Minister explained. “More jobs, more opportunity are the things we are focused on on this side of the House. You do not have to take my word for it, Mr. Speaker. The deputy premier of the province of Ontario, his former Liberal colleague, said that he was quite satisfied that things were done equitably here in the province of Ontario.”

Mr. Kennedy tried again, louder this time on the off chance Mr. Harper had not heard him.

“Mr. Speaker, I can understand why the minister wants to hide behind the other minister, but I do not understand why the Prime Minister is nailed to his seat when his Minister of Industry is getting the most money in the region: $36 million,” the Liberal cried. “Why is the Prime Minister punishing the unemployed and children’s recreation programs in certain ridings just because they did not happen to vote for him?”

Mr. Harper pretended not to notice this question. Mr. Clement stood and again directed Mr. Kennedy to the assurances of Mr. Smitherman.

“We have been fair and equitable,” Mr. Clement assured.

And you needn’t take his word for it.