The Commons: The interrogation of Lisa Raitt

The opposition won't let the case of the missing documents go 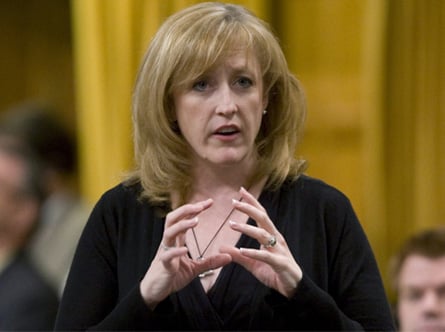 The Scene. The afternoon’s session began with the rare seven-part question.

Did the documents, he wondered, belong personally to the Natural Resources Minister? When did she realize they were missing? Did she inform her deputy minister? If so, when? What secret information did they contain? What commercial information may have been revealed? And, finally, would the government be taking action against the television network that was, previously and inadvertently, in possession of said documents?

Not surprisingly, the Prime Minister chose to answer none of these queries.

“Mr. Speaker,” he said, “as I said yesterday, the minister had reasonable expectations that these documents would be kept secret. The minister has acted accordingly, and I support the minister in her actions.”

The Prime Minister returned to his previous point. Then he revived his new favourite trick.

“Let me quote for the member opposite the editorial today in the Toronto Star which says that the minister offered her resignation,” he said. “The Prime Minister rightly refused to accept it. It is time for the opposition to move on to more substantive issues.”

The Conservatives stood to cheer the infinite wisdom of the same editorial board that endorsed Stephane Dion last fall.

Asked to get serious, Mr. McGuinty, blessed of a serious-sounding voice, tried to do just that.

“Mr. Speaker, let us move on and take stock,” he said.

Across the way, Gary Goodyear grabbed the International Trade Minister, Stockwell Day, at this apparent threat of abduction.

“Three shutdowns, four radioactive leaks in 18 months,” McGuinty continued, “$600 million in undisclosed cost overruns; a fraction spent of the $351 million for Chalk River isotopes; a $1.6 billion lawsuit; dozens of hospitals and thousands of Canadians waiting for their medical tests now forced to settle for 20th century medicine in 2009; a minister’s secret materials left behind in a national newsroom.”

“Prime Minister, tell us, explain please,” the Liberal begged, “why the decision not to accept your minister’s resignation?”

Stephen Harper had had enough by then. Indeed, he would not rise again all day. Up here, for the first of 13 responses on this, the second day of her testimony, came the Natural Resources Minister.

“Mr. Speaker, I am very pleased to update the House today on progress that we have made with respect to medical isotopes,” Lisa Raitt began. “As we have mentioned before, this is a global issue that is going to be dealt with in a global manner. Through Canada’s leadership we have been successful in having our co-operative partners in The Netherlands’ Petten to increase their medical isotope supply by at least 50 per cent. The Australians are coming on line much quicker than they had expected for commissioning. Tomorrow we have a very important bilateral meetings in Washington dealing with the matter.”

Mr. Goodyear smacked the desk in front of him with delight. The government side stood to applaud.

The Bloc Quebecois took their turns. Gilles Duceppe raised questions of ethics and codes. Raitt returned to her rote. “Mr. Speaker, as indicated yesterday this is a serious matter,” she assured. “There are clear procedures in place in our offices. Those procedures were not followed. Corrective action has been taken. I offered my resignation to the Prime Minister. He did not accept it. A member of my staff offered her resignation and I did accept it.”

Duceppe invoked the example of the former minister for foreign affairs.

“Mr. Speaker,” Raitt replied, “as we have indicated, there are clear procedures…”

Michel Guimond raised the name of Julie Couillard. The government side grumbled.

“Mr. Speaker,” responded Raitt, “as we have indicated, we treat this very seriously…”

Guimond turned to the government’s own guide to ministerial conduct.

“Mr. Speaker,” offered Raitt, “as we indicated, there are clear procedures…”

Liberal Geoff Regan stood and ventured a novel approach, invoking the case of a Liberal minister who stepped down in 2005 amid allegations of wrongdoing—one accusation later rescinded, the other linked to her chief of staff.

Raitt appealed for sanity. “Mr. Speaker, as indicated, this is a serious matter. Corrective action has been taken, but more importantly, the honourable member opposite oftentimes takes the opportunity in the House to ask me about the situation with respect to isotope supply and I think it is really important that we continue to focus on that,” she said. “That is why I was pleased to announce earlier that we have been successful globally in increasing the amount of global isotopes available, that Australia has agreed to go online faster than it had originally anticipated, and that we are working very diligently with our U.S. counterparts on coming up with a solution for this real issue.”

“Mr. Speaker, if they cannot handle secure documents, how can we have any confidence they will handle isotopes properly?” he asked. “This minister knows she is responsible. That is why she tendered her resignation, so I have to ask. Was it her idea to sacrifice her 26-year-old assistant, or was it the PMO operatives who made her shift the blame, or perhaps the Prime Minister himself?”

“Ahhh!” the Cons moaned at mention of the now departed staffer.

Raitt wondered if we might all move on. “I would just like to go back to what has been indicated earlier, where both the Toronto Star and the Globe and Mail indicated that it is time to move on and talk about things Canadians truly do care about, not about who did what to whom at what point in time, but rather what is going on with medical isotopes, how we are restructuring the Canadian nuclear industry in order to make more jobs for people, and what this government is actually doing to help Canadians.”

The Liberals turned then to Carolyn Bennett, the doctor and veteran frontbencher, whose ability to speak loudly and angrily often drives the Conservative side to distraction. There was some sparring then over the cost of this and that before Bennett, waving a pointy finger to rival the Prime Minister’s, attempted to convey the desperation of our current situation.

“Mr. Speaker, the Dutch reactor is going to go down for six months very soon. Australia imports 100 per cent of its isotopes,” she said, setting the scene. “In 2007, her government oversaw a life-threatening crisis in medical isotopes. Eighteen months later, the minister still has no plan–no plan for domestic supply and no secure plan for international supply. Halifax, Ottawa, Saskatoon, the B.C. interior. What do these places all across this country have in common? Thousands of Canadians already being told that they will not get the cancer or heart tests they need.”

“What is the minister going to do?” she finished. “Fire her policy advisor?”

Her time had expired and her microphone turned off, but her voice was no less audible.

“Mr. Speaker, I know the microphone got cut off, but I am sure we could all hear the yelling from the other side of the House. As I said yesterday, it is not making it a more compelling issue,” Raitt reprimanded. “The reality is and the facts are as follows. We are working with the world. It is going along very well. Canada has taken a leadership position and is working very diligently around the clock on this matter. It is extremely important to our Canadians. That is where our efforts are with respect to the matter.”

The minister would have to stand a few more times, but the worst of the day’s interrogation was over. Barring a profound public health crisis, she may yet get through this.