The Commons: This is a crucial time, apparently

So why all the talk about neck ties? 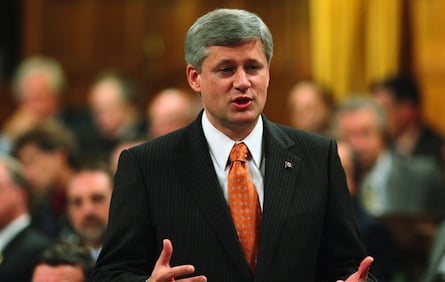 The Scene. Having not had the opportunity a day earlier to add his unique voice to the discussion, Conservative Gord Brown stood a few minutes before Question Period with a bulletin.

“Mr. Speaker, throughout my great riding of Leeds-Grenville there are shovels in the ground, there are roads, sewers and other infrastructure works being built and repaired and folks are looking forward to the future. Everywhere I travelled in my riding this summer the people told me they are pleased with the direction our government has taken to help position Canada to face tomorrow,” he reported. “My constituents have one message: ‘Remain focused on the economy and do not have an expensive and unnecessary election.’ ”

No doubt. Our last exercise in electoral representation cost the national treasury some $280 million. Even with a drop in the price of oil, another one might add approximately the same to our already overdrawn account.

Mind you, that surely pales in comparison to the cost of sending several dozen men and women to Ottawa after each election so that they might stand in their places every so often and repeat the rote partisan rhetoric of the day.

Not that one should fuss too much over the numbers. For who among us, really, can put a price on precious democracy?

Conservative Andrew Saxton later made something of something Justin Trudeau had said. Then Marlene Jennings mocked Jack Layton and Stephen Harper as the Hill’s hottest new couple. And then Sylvie Boucher rose to repeat Saxton’s comments about Trudeau.

Then the real fun began.

“Mr. Speaker, seven months ago the Prime Minister met with President Obama. Seven months ago ‘Buy American’ was threatening Canadian jobs, country-of-origin labelling was hurting our pork and beef exporters and a thickening border was damaging trade and tourism. Seven months later, these things have only gotten worse,” Michael Ignatieff lamented to open Question Period. “For seven months the Prime Minister has ceased to have any credibility in advancing the Canadian cause in the United States, so how will the 42 minutes tomorrow be any different?”

Well, for one, there likely won’t be an adoring throng awaiting Mr. Harper on the White House lawn as there was for Mr. Obama when the President visited Ottawa, though perhaps the embassy staff can be sent over to hoot and holler. For another, Mr. Harper will likely have a difficult time finding a Beavertail in D.C.

“Mr. Speaker, I anticipate, not just with President Obama but with congressional leaders, discussing things like environment and energy security, discussing peace and international security,” Mr. Harper replied, “and, of course, discussing the economy, which all governments of the G20 are focused on primarily now and which I would encourage the leader of the opposition to focus on, instead of trying to force a needless and wasteful election.”

This seemed an odd time to pick a fight with Germany. But then the Prime Minister has seemed eager for a tussle of late.

“Mr. Speaker, the Prime Minister just said he wants to talk about clean energy,” said Mr. Ignatieff. “That is an important subject, but he does not have any credibility on the subject. He has had three environment ministers in as many years. We have the worst climate change record in the G8 and we have no plan to create the green jobs of tomorrow. How can we trust the Prime Minister to advance the cause of the environment in 42 minutes tomorrow when he has failed for four years?”

The Liberal leader was strangely hung up on the specific amount of time Mr. Harper is to spend with Mr. Obama tomorrow. Perhaps it is generally understand at the upper echelons of power that it is in the 43rd minute that most of the work is accomplished.

“Mr. Speaker, of course, this summer, for example, I announced the Mayo B hydro project in the Yukon, which is an important project not just for the economy but for the environment as well,” Mr. Harper shot back. “We have a clean energy dialogue going on with the United States administration. Both of our governments are putting a lot of money into both green and clean energy technology.

“In fact, I do recall a time not too many weeks ago where the leader of the opposition actually supported those initiatives. I would encourage him to go back to supporting positive initiatives instead of trying to force the country into a wasteful election for his own purposes.”

Indeed. One shudders to think what would come of this country were into fall into the hands of a man with such motivations.

With Bob Rae still recovering from yesterday’s showing, the Liberals turned next to Denis Coderre, the great booming voice first taking issue with the colour of the Prime Minister’s neckwear before proceeding with a series of words that were apparently meant to form a question of some kind.

For a few awkward seconds, no one on the government side rose to respond, the frontbench apparently unsure to whom the apparent query was directed. Finally, Lawrence Cannon stood and pronounced himself confused. Coderre stood again and this time went after the foreign minister’s choice of tie.

Returning to the business of Mr. Harper’s trip to the White House, Jack Layton suggested that the Prime Minister pursue serious measures on the environment, while simultaneously concluding that Mr. Harper was almost surely incapable of doing so.

“I would point out we are committed to clean development of the oil sands, upon which many Canadians’ jobs depend, including a number of NDP voters,” Mr. Harper shot back, “or at least people who work there who used to be NDP voters.”

Not that we’ll know anything for sure about that until that wasteful, expensive and unnecessary election is called.

The questions eventually came around to Gerard Kennedy, the former Liberal leadership hopeful who has quietly spent the last year growing a fine head of hair and developing into one of his party’s best assets. As he had a day earlier, Mr. Kennedy stood and wondered aloud how it is that so much government spending has found its way to ridings that most recently elected Conservative MPs.

Gary Goodyear rose and proudly asserted his government’s ability to spend some $2 billion in public funds. Unsatisfied, Kennedy gave it another go. This time, John Baird was sent up. And the Transport Minister, loud and demonstrative, proceeded to make a joke about Ontario Premier Dalton McGuinty. The government benches dutifully roared with laughter.

A short while later, out on the Hill, some tourists were walking away from the Peace Tower. “I think there might be an election in Canada,” one said. “This is a crucial time.”