Harper, newly engaged, unleashes attack ads and a warning: "That honeymoon is over" 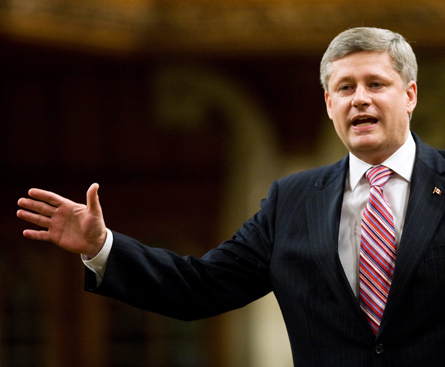 The Scene. The Prime Minister finds it hard to scream with sufficient force in his second language. Sure, by now, he probably knows the words. He knows how to conjugate his disparaging verbs, understands the French separation of masculine and feminine insults, has memorized on which sneered vowels to put his accent circumflex and on which to put the accent grave. But when volume is required he retreats to the comfort and confidence of his natural tongue.

And sure enough there he went, yelling and pointing and carrying on in that way that he does. The Conservative side still loves this so. Though it’s a wonder—nearly 1,200 days into his tenure as Prime Minister—that Mr. Harper has enough energy to twist up his face, wag his finger and vent his fury so physically.

Forgive the Prime Minister if you find his behaviour unseemly. He knows not what he does. Or, rather, he knows only what he does—50 years into his life and three years into his government he certainly seems to have settled on who he is.

When Elections Canada ruled that his party had violated electoral rules in winning the 2006 campaign, he took them to court. When an MP’s dying suggestion that Conservatives tried to bribe him was made public and the opposition demanded to know what Mr. Harper knew, he sued. When the Military Police Complaints Commission insisted on looking into the treatment of detainees in Afghanistan, he sought an injunction. When parliamentary committees too insistently went about their own business, they were driven to dysfunction.

When the Liberal party got round to picking its chosen alternative to Mr. Harper—the rail thin and awkward Stephane Dion—the Prime Minister expended great amounts of energy and money to question that man’s fortitude. And when Mr. Harper’s attempt, immediately after defeating that man, to bankrupt the opposition parties inspired a coalition that threatened to remove his government from power, the Prime Minister slurred his rivals as enemies of the state and dispatched his forces to tar the proceedings as undemocratic.

Within a few days of Parliament’s return from all that, the Conservative side was after Mr. Dion’s successor. Soon enough they were up two and three times a day with complaints and accusations. The Speaker appealed for calm, the government carried on.

This morning, the Prime Minister’s aides happily—if anonymously—unveiled a website and a half dozen new television ads meant to take Mr. Ignatieff down a proverbial peg.

“Mr. Ignatieff has had an extended honeymoon. That honeymoon is over,” vowed one of Mr.Harper’s officials.

“There’s a lot more,” cooed another, “this is the first step.”

Of course, he misspoke. Mr. Harper has been walking—and yelling and pointing and swiping and waving—this way for 1,200 days now. And whatever honeymoon there was after his triumphant election night in 2006—”Although Canadians have voted for change, they have not given any one party in the House of Commons a majority,” Mr. Harper said. “They have asked us to cooperate, to work together and to get on with tackling the real concerns of ordinary working people and their families. I look forward to working with all of the parties and all of the members of parliament to build consensus and move this country forward. Friends, I have never been so proud of our great country and I am honoured and overwhelmed to be asked to lead it. Friends, we will govern as we campaigned. In a spirit of hope, not fear,”—the discord that’s followed has made that seem a time of false hope.

A day earlier the Prime Minister had seemed a bit bored, merely reciting tired lines about what Michael Ignatieff might or might not do were he to win power. By this afternoon, he was newly engaged. When the hour was up, he made for the exit, his parliamentary secretary Pierre Poilievre giving him a big thumbs up as he passed by.

A few minutes later, Poilievre was out in the foyer, standing at a microphone, trying to explain to puzzled reporters why one of the new advertisements apparently takes issue with Michael Ignatieff’s insufficiently Quebecois accent. A radio reporter asked why the government wasn’t commandeering the airwaves to celebrate its own accomplishments.

Just then, Mr. Ignatieff arrived at the next nearest microphone, a rather large crowd gathering round to elicit a response.

“On a day when we have got record bankruptcies, we have got unemployment skyrocketing, all this government can think of doing is running attack ads on me,” he said. “This is the old style of politics. We are in the middle of a serious economic crisis. This government needs to grow up and do its job properly. I made it clear, I made it clear, I’m not going to attack Mr. Harper personally. I don’t expect he should attack me and if he thinks he can accomplish what he did with my predecessor, he is sorely mistaken.”

There was discussion of how best to describe his accent and then someone confronted Mr. Ignatieff with reality.

“It did work against your predecessor. So what will you do to make sure it doesn’t work? Is there anything in particular you could be doing or are you going to have ads of your own?”

“I will reply vigorously,” he said, “to attacks on my integrity and character.”

There will then be much more screaming before this is finished.