The Commons: Welcome back, Mr. Harper

Iggy pushes the PM to a new level of furious 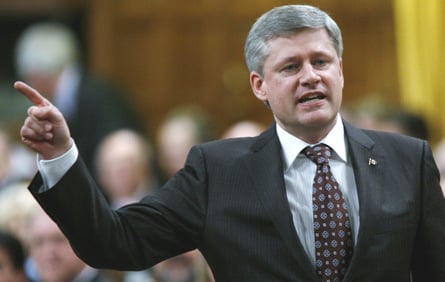 The Scene. The Prime Minister leaned on his left elbow and listened. Across the way, two sword lengths in front of him, his rival was asking another of his incessant questions.

“Mr. Speaker, yesterday the governor of the Bank of Canada told Canadians that the recession would be deeper and longer than anticipated,” Michael Ignatieff reported by way of introduction. “Today the International Monetary Fund predicts the most severe recession since 1945. These predictions come as no surprise to the 300,000 Canadians who have lost their jobs since January of this year.”

It’s been nearly a month—not since March 25, in fact—that Stephen Harper has been made to sit in his place and listen to this. Back then, in simpler times, he had been made to answer only for a funding gap at the CBC. Now, back in his place, the opposition had returned to the heavier matters of this global economic crisis. The recession Mr. Harper saw before he didn’t see. The deficit he promised never to foist on the national bank account. The jobs that began disappearing shortly after he assured everyone that Canadians weren’t worried about such.

A month spent travelling the world, trying one’s best to look prime ministerial, suffering the indignity of having one’s bathroom habits internationally ridiculed and for what? To spend the morning telling his caucus not to worry about what his own staff may or may not have said about a former prime minister? To find another prominent columnist speculating in the morning paper about his impending departure? To sit here, in this seat, taking guff from a rival who was now out-polling him?

“What additional measures,” Ignatieff finally asked, “what hope can the Prime Minister offer to the people who may be watching this on television because they do not have jobs to go to?”

As Ignatieff finished, the Prime Minister reached across his desk and unclipped a yellow sheet of paper from his binder. He then stood, faced the Speaker and placed the sheet in front of him on the desk to his immediate left. He responded first with a questionable claim about the size of his stimulus, then a couple sentences of reassurance for the benefit of the massive TV audience, then reached for his neatly typed note and began to read. “Let me just point out what the IMF said today about the record of Canada and a couple of other countries,” he said. “It said, ‘Fortunately conservative monetary and fiscal policy management in these economies now leave policymakers better placed than those in other economies to mitigate further declines in demand.'”

“Ohhh!” chirped various Conservatives as the government side rose to proudly cheer their leader’s literacy.

Now, the “conservative,” in this case, was lower case. And sure, there may be little solace in being less worse off than everyone else. But never mind that now. This was apparently a zinger.

Unmoved, the Liberal leader tried again. “Mr. Speaker, the Bank of Canada made it very clear that the economic crisis has worsened since January,” he said. “Does the Prime Minister understand that the assumptions of his January budget no longer hold? Will he revise his own projections in respect of revenue and deficits? Will he bring forward additional measures to help the vulnerable and working Canadians?”

Such reasonableness visibly perturbed the PM.

“Mr. Speaker, we will constantly analyze the situation and take whatever measures are necessary. As the IMF and others have said, we are taking the appropriate course of action. Now I know the leader of the Liberal Party and the kind of additional measures he wants are increases in taxes. That is not what we are going to do,” Mr. Harper said, his volume rising, his right hand chopping the air.

Back up came the Conservatives to cheer.

Only back up too came the Liberal leader. And where his predecessor might’ve been expected to pout or flail or merely repeat himself, Mr. Ignatieff ad libbed.

The Liberals rose to cheer.

“I ask the Prime Minister,” Ignatieff continued, the Conservatives yelping for the Speaker to call time and cut him off, “how can he explain this record of incompetence to the Canadian people?”

Now the Prime Minister was compelled to match him and he came up looking cross. Indeed, not since his government faced imminent demise last December, has Mr. Harper looked so furious.

“Mr. Speaker, the fact is this, virtually every country in the world is running a deficit. The reason we are running a deficit is to take money that the private sector is not using and to make sure it is employed for the benefit of people who are losing their jobs,” he said, his right hand groping the air.

“That is why we have surpluses in good times, so that we can act when times are tough,” he continued, scowling and yelling and then pointing in Ignatieff’s direction. “And none of that—there is no excuse for an agenda to raise taxes.”

Ignatieff sat back and chuckled slightly at the show.