The Commons: 'When will it stop?'

Ignatieff on Lisa Raitt: 'When will the minister cease to be distracted and begin doing her job?' 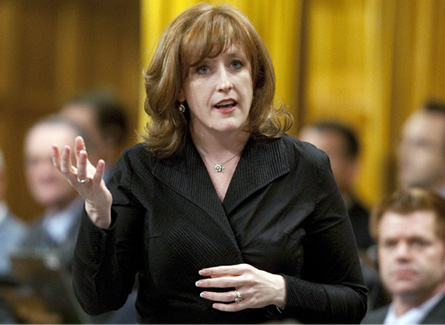 The Scene. Lisa Raitt arrived in the House sporting newly coloured hair, her blonde locks now brownish red. Perhaps the new look was meant to signal change or, better still, rebirth. Perhaps it was meant to confuse her critics opposite, disguising the Natural Resources Minister and redirecting attacks at the golden-haired government MPs around her.

To their modest credit, the opposition is a bit too quick for that. They can generally pick a troubled minister out of a line-up. And, however slow the MPs opposite sometimes are, even the most fascinating new do could not distract attention from the variously disheartening, troubling and entertaining allegations that now threaten Ms. Raitt’s previously promising political career.

“Mr. Speaker, across the country, thousands of Canadians can not get a cancer diagnosis. The government knew the last 18 months that it would happen. It left a problem at Chalk River to become a crisis for our health care system,” Michael Ignatieff began, opening the afternoon’s session of Question Period. “Instead of blaming young people of 26 years and instead of arguing among themselves, which in this government will take responsibility for this national crisis?”

In this case it would be Leona Aglukkaq, the health minister. She attempted reassurance, but Mr. Ignatieff persisted.

“Mr. Speaker, the government keeps pretending that there is an alternative supply of isotopes but the Dutch reactor will be shut down for maintenance next month and for six months in January,” he continued. “South Africa is already shut down for maintenance this week. The Australians will not come on line for at least six months. When will the minister stop trying to cover up a national health care crisis? When will she start telling Canadians the truth?”

Ms. Aglukkaq stood to answer, but Ms. Raitt was quicker to her feet, eager apparently to engage the opposition leader in a game of musical reactors.

“In fact, Petten, in The Netherlands, has increased by 50 per cent its production of medical isotopes. It is going to be going into a maintenance shutdown. However the Belgian reactor will then come up to production on July 21,” she said. “Moreover, it is completely false that the Australian reactor will not be coming on line for six months. As it indicated in the Canberra Times itself, that is just a matter of weeks.”

“Ohhh!” the Conservatives sang at this apparent burn.

Mr. Ignatieff came back undaunted. “Mr. Speaker, the Dutch informs us there is no guarantee those isotopes will reach Canada,” he shot back. “It is clear we are in a national health care crisis with a minister who is badly distracted. We have a minister who is trying to recover lost binders, trying to explain incriminating tapes and thousands of Canadians are desperately waiting for medical treatments. This is a fiasco.”

“When will it stop?” the Liberal leader asked, “When will the minister cease to be distracted and begin doing her job?”

Ms. Raitt might well be wondering the same thing. First, a binder in a television studio. Now, a tape recorder in a Parliament Hill washroom. It is, for sure, anyone’s guess what further effects of the government might be stashed around the capital, what great treasures might be buried under the patio at Hy’s.

“Mr. Speaker, again the fact remains that this government has actually acted on the matter,” Raitt responded, a little louder, a little more insistent now. “When it became apparent that the MAPLEs reactors would not produce one single medical isotope after 12 years and hundreds of millions of dollars a decision was made to shut it down and indeed we accepted that. Furthermore, we took on the extra steps of finding alternative measures and working with the medical community.”

She discovered then her inner Poilievre. “Of course, I would not expect that five Liberal cabinet ministers in that period of time would have actually done anything on it,” she snarked. “I assume that the leader of the opposition does not know because he was not in the country at the time.”

The Conservatives jumped up to applaud. “Go home!” yelped a voice from the government backbenches.

The Liberals pressed on, David McGuinty wondering if the minister could confirm reports of her supposedly recorded opinion that the Health Minister is lacking. This brought Rob Nicholson, the Justice Minister, to his feet to assure the House that his government had nothing to do with the associated proceedings in Halifax.

McGuinty wondered aloud if the Prime Minister might dispatch his Natural Resources Minister on account of either her alleged lack of confidence in the Health Minister or, at the very least, the distraction that supposed lack of faith was now proving to be. Since the Prime Minister was not present there were a few awkward seconds while the government side figured who to send up. Finally, to some mocking from the opposition, Ms. Raitt sprang to attention.

“Mr. Speaker, again, I think it is important to correct the facts,” she maintained. “In fact, yesterday the member for Ottawa South himself made some statements in the media with respect to reactors. He said that the OPAL reactor is 12 months away from operation. Indeed, that is false. He said that Australia would not be able to export a single medical isotope. Again, that is false. Finally, he confused the countries of Belgium and the Netherlands, indicating that the Petten reactor was in Belgium when, in fact, it is in the Netherlands.”

Seated a few rows over, Pierre Poilievre appeared positively giddy at this effort. Across the way, Mr. McGuinty sat shaking his head.

Raitt and Aglukkaq were given a short reprieve as the Bloc and NDP moved on to other matters. Then Carolyn Bennett was up, drawing the usual grumbles and heckles from the government side.

“Mr. Speaker, three weeks later and still the message from the Minister of Health to the provinces and territories is the same: they are on their own and will have to figure out how to get along without isotopes,” she said. “All across Canada patients are waiting. Do they have cancer? Has the cancer spread? Is their chest pain really heart disease? Marilyn Williams, the Director of Diagnostic Imaging of Bluewater Health in Sarnia, says that her hospital is only able to perform about half the diagnostic tests it would normally do with a total daily supply down to 10 per cent. Where is the government’s plan to get worried patients the tests they need?”

“Why are you trying to scare people?” moaned a government member.

Aglukkaq vowed to keep working on it.

“Mr. Speaker, the minister is asking these people to practice 20th century medicine in the 21st century,” Bennett ventured with her second opportunity. “She knows that the patients are being turned away from hospitals. Tomorrow the Ottawa Hospital here will be out of isotopes. Their corporate manager of nuclear medicine, Alan Thibeau, says that after that it is anybody’s guess because there is nobody out there who can really answer those questions. Hospitals are looking at a 30 per cent increase in costs because of having to use alternatives. Will the Minister of Health commit to the provinces and territories that she will reimburse every single dollar?”

The government side groaned. Aglukkaq assured her she was working on it.

“Mr. Speaker, again, as we have indicated, this is a global issue,” Raitt offered as reassurance, “and we are dealing with our global partners in the matter.”

Dosanjh moved in. “Mr. Speaker, the minister states that the Dutch or the Australians or the Belgiums will make up the isotope shortage across the world,” he reminded the House. “Is there any guarantee that any of those isotopes will end up in Canada? Can the government offer a guarantee to this House that any isotopes from any of those three countries will ever be guaranteed to come into Canada?”

“Mr. Speaker, as the member points out, there is a difference between the medical isotopes being produced at a reactor and those making it to the end of line with respect to the medical establishment,” Raitt began in response.

“Answer the question!” yelped a Liberal.

“Yes or no,” cried an opposition member.

“We are collaborating,” Raitt concluded, “we are working together to deal with this on a continental basis.”

“No guarantee!” mocked a voice from the Liberal side.

Indeed, at the moment much remains unsettled. Up to and including whether or not Ms. Raitt will still be the minister responsible for this file by the time Question Period arrives tomorrow.