The Commons: 'Why do you hate ShamWow?'

The Liberals, Bloc and NDP gang up on the Conservatives over employment insurance 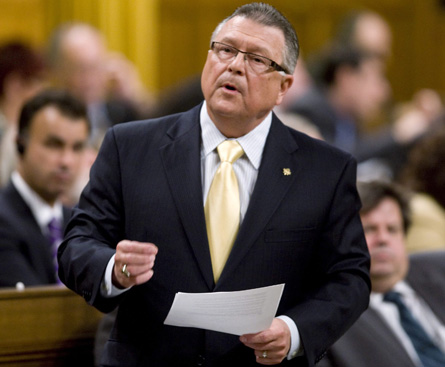 “Mr. Speaker,” he began, “a third of a million Canadians have lost their jobs under the Conservative government.”

“You’re next Ralph,” chirped Conservative Jeff Watson from the further reaches of the government side.

“Tens of thousands cannot get the employment insurance they paid for, because Conservatives insist on eligibility rules designed for the beginning of a boom,” Goodale continued undaunted. “But the boom has gone bust. The C.D. Howe Institute, the Conference Board, the TD Bank—these are not socialist organizations—and they all say the Conservatives are wrong on EI. Why will the Prime Minister not help all of the jobless workers who are suffering through his recession regardless of where they live?”

“Oh Ralph,” moaned a Conservative at Goodale’s assigning our current predicament to our current Prime Minister.

Unfortunately, Mr. Harper was not present. And though normally that would’ve been the cue for Diane Finley, the Human Resources Minister, to stand and dismiss the Liberal complaint, this time the government sent up Tony Clement.

“As members will have heard from our social development minister as well, we have a generous system of EI in this country,” the Industry Minister reported on Ms. Finley’s behalf. “It has been in place for a while. We actually made it better under budget 2009 by extending work sharing and by extending the program itself by five weeks. It is driven by market demands. It is there for times of economic difficulty. Eighty percent of those who pay in get money out of the system. We will not have a system and we are not in favour of a system that drives higher payroll taxes which will not be to the benefit of workers and not to the benefit of businesses. We will not be in favour of that.”

Goodale came up for his second turn. “Mr. Speaker, let us be clear,” he replied. “The previous Liberal government slashed EI premiums 12 consecutive times, 12 times, more than 40%, and now premiums are frozen at that lower Liberal level.”

The Liberal side stood to applaud. Mr. Goodale continued through the noise.

“EI rates will only go up if these Conservatives put them up. So do not blame the Liberals and do not blame the innocent victims who are trashed by a Conservative recession,” he charged. “The Prime Minister thinks EI benefits are too generous. The minister says they are too lucrative. Will they not just admit the only thing stopping them from fixing EI is their own archaic Reform Party ideology?”

Once more, the Speaker called for the Industry Minister.

“What are you saying?” begged a Liberal.

Goodale was followed by the similarly sturdy Denis Coderre, Lawrence MacAulay and Rodger Cuzner, each hectoring the government with indignation and outrage.

“Why do you hate ShamWow?” a Conservative wondered aloud.

“What we see in Atlantic Canada is a pending crisis in the Atlantic lobster fishery,” Cuzner finished. “What is the minister willing to do to help these people and spare us the sales pitch?”

To each, the Conservatives sent up Randy Kamp, parliamentary secretary to the absent Fisheries Minister. His answers were evenly delivered, relatively quiet and respectful. Whatever hopes he had of joining cabinet beforehand were probably dashed by the time he sat down for the last time.

Gilles Duceppe stood next and suggested the Prime Minister had, on a previous day, not been fully forthcoming about the state of employment insurance. The Conservatives howled at the outrage and motioned for the Speaker to eject him from the proceedings. Duceppe proceeded unapologetically, his denunciations of the government eventually winning a tri-partisan ovation from the opposition benches.

Shortly thereafter, it was Jack Layton’s turn to take issue with the government’s attitude toward the unemployed.

“Mr. Speaker, yesterday the Prime Minister clearly misled Canadians on EI. Worse than that, he threatened an election on the backs of the unemployed,” he cried to groans from the government side.

“The truth is this: one-third of men and 40% of women do not have permanent full-time jobs. Most of them fall through the cracks of the EI system. Government research shows that 66% of part-timers and the majority of young workers who pay premiums do not qualify to get the benefits after a layoff because they have not worked enough hours. Instead of bullying and threatening and misleading, why will—”

His time had run out. Clement rose to handle the half-asked question.

“Mr. Speaker, here is the reality: as a result of our economic action plan we have added an extra five weeks to EI; froze premium rates; and provided extra work sharing,” he reported. “Another 100,000 Canadians are protected as a result of our efforts, which that member’s party voted against.”

Then the minister turned ominous. “We see what is happening here,” he said. “The coalition is alive and well. The coalition is working together on this issue. They want extra payroll taxes for Canadian businesses and workers. That is their issue. We will not allow that to happen.”

Only Dean Del Mastro of the government side rose to applaud Clement’s effort.

Layton moved to his second language and the matter of pensions. Clement responded first in French, switching to English only to offer a Harperesque flourish at the end.

“We will not allow that coalition,” he pronounced. “They do not represent the people of Canada, and this is merely another coalition.”

There was barely tepid applause from the government side.

Not until much later did the Liberals succeed in drawing Ms. Finley back into the fight.

“Mr. Speaker, the government does not seem to want to let the human resources minister stand and answer any questions today,” observed Michael Savage, another imposing Liberal interrogator. “Perhaps that is because yesterday the Minister of Human Resources failed to tell the truth when she claimed that creating a universal 360-hour eligibility standard for EI would ‘mean that a Canadian could work for 45 days and collect EI for a year.’ That is completely false.”

Then, finally, the question. “Will the minister admit to misleading the House?” Savage pleaded. “For once, tell the truth. Do unemployed Canadians not deserve at least that?”

Compelled to respond, Ms. Finley did not disappoint.

“Mr. Speaker, the Liberal proposal is to have Canadians work for 360 hours to collect EI benefits. It works out to 45 days. What goes along with that would have to be a dramatic increase in payroll taxes,” she ventured.

“That payroll tax increase would kill jobs and small business. We are trying to protect jobs and help Canadian workers keep their jobs. That is why we brought in the work-sharing. That is why we froze EI premium rates. They want to tax and spend people out of their jobs, not us.”

Up jumped the Conservatives with their heartiest cheer of the day. Mr. Kamp, take note.