The Commons: You can have it both ways or no way at all 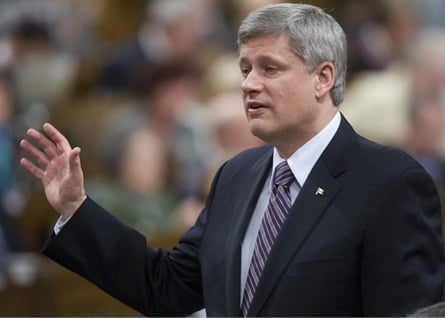 The Scene. To evidence of the Prime Minister’s particularly brand of genius, you can add this, the first exchange of Question Period on this, the last day of September.

Michael Ignatieff opened with some cause for concern. “Mr. Speaker, Statistics Canada reported that the economy stalled in July,” he said.

The Conservatives across the way groused loudly as he proceeded to report the afternoon’s news.

“While the government spent millions of dollars telling Canadians that everything is fine, experts do not agree,” the Liberal leader continued. “The chief economist at the Bank of Montreal stated that the economy’s flat performance is a shocker. ‘It is not just a shot across our bows,’ said the bank, ‘it is more like a torpedo through the hull.’ ”

“Can the Prime Minister advise,” Mr. Ignatieff finished, “when he and his ministers plan to start bailing?”

The Prime Minister pretended not to notice this question of proper seafaring.

“Mr. Speaker, while Canada’s economic performance was flat in July, of course we did see growth in June, and this is a much better performance than we are seeing south of the border,” he said simply. “As I have said repeatedly, while we are seeing the beginnings of a global recovery, it is fragile. That is why the House of Commons needs to be at work on the economy, passing measures for the unemployed and not out forcing an unnecessary and wasteful election.”

There is a certain exquisite charm to the options before us as presented by the Prime Minister. On the one hand, the economy may be doing well, or at least better than expected, a possibility that would apparently justify Mr. Harper’s continued presence in office. On the other hand, the economy may be teetering, or at least struggling, a possibility that would, well, justify Mr. Harper’s continued presence in office. Flip a coin. Heads, Mr. Harper wins. Tails, Mr. Ignatieff loses. On such logic does Ottawa trudge into winter.

The questions came round to Jack Layton, who dared suggest Mr. Harper’s government had some responsibility for a change in provincial taxation it loudly promoted and then lucratively facilitated. “Mr. Speaker, the Minister of Finance’s decision to impose a new tax on everything from diapers to gasoline to funerals is going to be a hardship on families, particularly as they are struggling with this economic crisis,” the NDP leader declared. “He thinks so highly of this new tax that he bribed Ontario and British Columbia with seven billion taxpayer dollars in order to impose and accept the new HST. He even brags in the media today that the HST will not be a big issue in the next election because the consumers will have become used to it. Does the Prime Minister also think that Canadians are going to be so forgetful that they are going to forgive him for his new death tax?”

It was then Gerard Kennedy’s turn.

“Mr. Speaker, yesterday the Prime Minister refused to answer simple questions about the misspending of infrastructure money in New Brunswick,” he alleged, blasphemously. “How about today we try the other side of the country, where it is even worse? In British Columbia, the Prime Minister has now promised to give $158 million in extra government funds to his Conservative colleagues at the expense of the unemployed and their families in other parts of the province. Rather than focusing on jobs, the Prime Minister is focused on helping his Conservatives keep theirs. Why should Canadians anywhere in this country trust the government?”

John Baird leapt to his feet to declare that the largest of the government’s grants had gone to a riding currently represented by an opposition member.

Mr. Kennedy tried again. “The Prime Minister has his priorities badly mixed up. These are difficult times. He is supposed to be standing up for Canadians in need,” he ventured. “Instead, in B.C. he gave his own MPs an average of three times as much money as those in opposition ridings in the province. All the top 10 allocations went to hungry Conservatives. Two-thirds of his cabinet took those top 10 positions. Will the Prime Minister explain today why he and his ministers are too busy dividing up the cash among themselves instead of looking after British Columbians who need the assistance?”

Mr. Baird rose to report that the president of the Canadian Construction Association was impressed with the government’s work to date.

Liberal Bonnie Crombie moved on to a different matter. Why, she wondered, was Mr. Baird’s department unable to supply the Parliamentary Budget Officer with details of its infrastructure spending? Mr. Baird reported news of federal funding in Ms. Crombie’s riding. The Conservative side cheered. “More! More!” they sang.

Ms. Crombie tried once more. “Will the minister come clean and open the books for all Canadians?” she wondered. Mr. Baird stood to announce the thanks of the mayor of King Township. The Conservatives cheered again. “More! More!” they repeated.

Indeed. The more these questions are asked, the more they go unanswered.