The Devils, hell, and the NHL 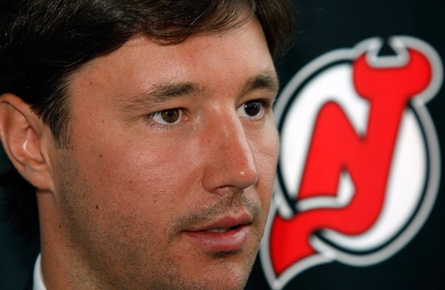 “The grievance is denied.” That’s the concluding sentence of arbitrator Richard Bloch’s Monday ruling on the 17-year $102-million contract Ilya Kovalchuk signed with the NHL’s New Jersey Devils last month. When the NHL deregistered the contract, whose terms would have seen New Jersey pay Kovalchuk 97% of the total amount in the first 11 years of the deal, the Players’ Association naturally objected.

Sure, the NHLPA argued, there were years tacked onto the far end of the deal that neither Kovalchuk nor New Jersey expect the player to be in the NHL for. Those years are priced below the likely league minimum, and are obviously in the contract for the sole purpose of lowering Kovalchuk’s average salary-cap hit in the present. But what of it? Nothing in the Collective Bargaining Agreement between the league and the PA specifically forbids this behaviour, and several similar “backdive” deals, though less extreme in every respect, have already been registered by the NHL and played under.

Bloch rejected this argument, granting a clear outright win to the league. The CBA contains a general “anti-circumvention” provision, but the guidance offered by that provision was less than clear:

No Club or Player shall enter into any Player Contract, Offer Sheet or other agreement that includes any terms which are designed to serve the purpose of defeating or circumventing the intention of the parties as reflected by the provisions of this Agreement, including without limitation, provisions with respect to the Entry Level System or Restricted Free Agency. However, any conduct permitted by this Agreement shall not be considered to be a violation of this provision.

Now that’s an odd paragraph, wouldn’t you say? Because there is no rule in the CBA that would in itself forbid the Kovalchuk deal, the NHLPA leaned on that last sentence, which basically says “anything permitted by this agreement is permitted by this agreement” and seems, in its plainest reading, to deprive the first sentence of all its potential force. Well, hell, no arbitrator’s going to go along with that—i.e., to read a paragraph completely out of a contract prepared and vetted by professionals representing both parties, as if he were physically Liquid Paper-ing it out of the document.

Bloch had little choice but to conclude that there must be some reason for a general anti-circumvention rule—and that reason, he concluded, was to allow the league to block contracts like Kovalchuk’s, which violate the spirit of the CBA rather than its letter. Nothing specific about Kovalchuk’s contract—the amount, the end date, the degree of frontloading—is forbidden by the agreement, Bloch conceded. Perhaps no single factor is even unique to it. But, taken together, the components have a vague tendency to offend the “no circumvention” concept. Supposedly.

Bloch’s decision includes an observation that is, after all, very hard to disagree with: “A contract term covering a Player’s NHL services to age 70…is not expressly prohibited by the CBA. But the parties to that SPC may not reasonably be found to be seriously anticipating its fulfillment.” Bloch would have created a serious problem for the NHL if he had found the anti-circumvention sections of the CBA to be meaningless. If he had ruled in favour of the NHLPA, you can bet your last nickel that someone would have been signing one of those age-70 contracts in July 2011. Or even sooner.

But Bloch has created a serious problem, too: as a consequence of his ruling in defence of the CBA’s spirit, it is no longer clear exactly which frontloaded contracts are kosher and which are treyf. Kovalchuk and the Devils returned to the negotiating table Monday night in an attempt to save the contract by tinkering with the math. What principles ought to guide them? What changes must they make to render the contract acceptable in the eyes of another arbitrator—one who wouldn’t even be Richard Bloch? (The NHL and the Players hire arbitrators for the duration of only one grievance; experience in the sporting world has shown that owners will inevitably and instantly fire any “permanent” arbiter who rules against them.)

Bloch hasn’t really said what kind of deal meets the no-circumvention test. He didn’t even give the parties the reassurance that existing frontloaded contracts are definitely legal and could be safely imitated. In fact, he specifically said the opposite. Which puts the league under no apparent obligation to even treat like contracts equally, or two different teams consistently. All that the Devils and Kovalchuk can really do here is to seek Commissioner Bettman’s advice in advance of signing, or make another deal and cross their fingers that either the Commissioner will like it or the next arbitrator will uphold it.

The Collective Bargaining Agreement doesn’t appear to offer the team and the player any freedom to sign a contract without some degree of league interference—which raises the question, what good is the CBA at all if we’re going to have a “Bettman decides everything” system? (And, more particularly, how did the Players’ Association get manoeuvred into signing an agreement that doesn’t protect its rights very effectively?)