The Five Hole: Pronger, Boychuk and the dawn of Opposite World 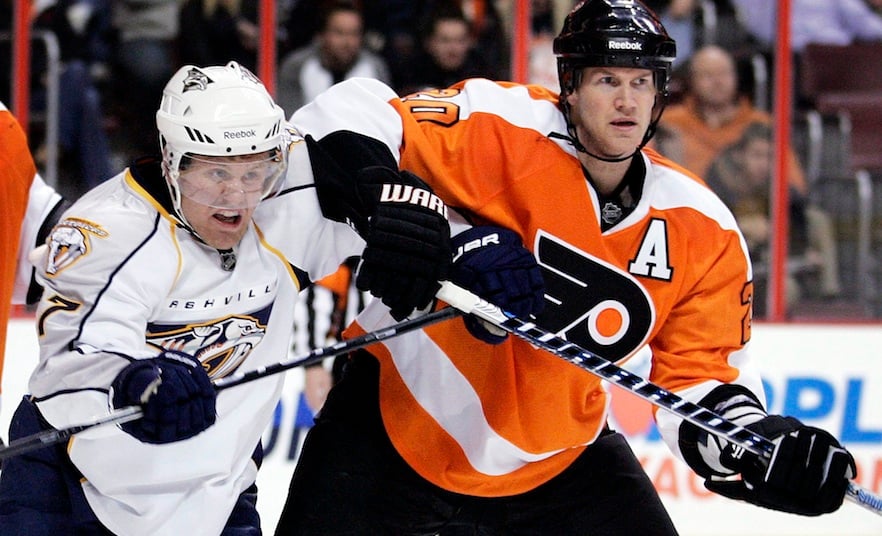 1a. It’s been only a few days so many of you are probably still coming to grips with the unfamiliar possibility that the New York Islanders will have a solid corps of defencemen this season. I know, it’s tough to process. Relax, breathe deeply – we’ll get through this together.

In case you missed it, the Isles acquired Johnny Boychuk from Boston and Nick Leddy from Chicago. These newcomers will slot in nicely on the blue line, taking ice time away from that scarecrow dressed in a helmet and the hologram of Tupac.

Writing about the Bruins-NYI trade, ESPN.com noted that the Islanders were acquiring a “bona fide veteran” in Boychuk – which is a weird way to put it, right? It sounds like a compliment but actually it’s just a factual statement. Yep, what you’re gettin’ here is a bona fide, genuine person who has previously played this game in corporeal form. (Coincidentally, this is all the Edmonton Oilers look for when plotting their draft strategy.)

1b. Boston fans weren’t happy to see Boychuk depart. Neither was the guy who departed him. Boston GM Peter Chiarelli insisted it was really hard to send Boychuk packing, saying: “This is tough. He was upset. I was upset. I’m still upset.”

Hang on, is that a quote or the chorus to the new Adele single? Either way, I’m misting up here.

2a. Did you watch the Kings lose to the Sharks on opening night? Me neither, because I am old and love my bed the way a fat kid loves elastic waist pants. But I did watch the highlights, which as I understand it entitles me to One Strong Opinion. Point is: I’m not saying the Kings looked out of it but Jonathan Quick sure woke up from his second-period nap with some hilarious pillow marks on his face.

2b. Did you see the new coach of the Oakland Raiders hold a ceremony in which he buried a football in front of his team? Tony Sparano called the ball a symbol of the team’s futility through the first four games of the season. The ceremony was designed to mark a new beginning. (Knowing the Raiders, it will likely be the beginning of a whole new kind of futility, possibly one involving Benny Hill-style antics.)

Anyway, I wonder if this caught the attention of Ted Nolan. The Buffalo Sabres last season were a bigger train wreck than Barack Obama’s foreign policy wrapped in NBC’s fall comedies and driven into a tree by Lindsay Lohan.

For the record, Buffalo wasn’t entirely hapless – a few players had some hap. But Nolan may want to start digging. He’s going to require a bigger hole though – for a real fresh start, he’ll to need to bury a puck, five defencemen and every year back to 2011.

3. Chris Pronger has been hired to work for the NHL’s department of player safety because we now live in Opposite World where up is down, left is right and the ability to inflict concussions is the ability to prevent them. That said, I’m really looking forward to his player safety videos: “No, no, dummies – THIS is how you lay a guy out. [Hits Eric Lindros from behind in a supermarket checkout lineup.]”

4. Did you see Henrik Sedin battle for that empty net goal against Calgary? (Scroll down to the second video.) I’m telling you: We haven’t seen hard-fighting, arm-swinging determination like that since 2006, when Kirstie Alley spotted an M&M way over there.

5. So I was driving in my car in Ottawa the other day when I thought I heard a sports radio host describe the first week of the NHL season as a “critical period” for the Senators. Turns out there’s a reason I thought I heard this. The reason is: he actually said it. OHMIGOD WE’RE OH-AND-ONE IT’S ALL OVER THROW THE WHOLE TEAM INTO A VOLCANO!!!

I suppose that’s just a reflection of our era. Thanks to texting and Twitter, we can hysterically overreact at a speed our forebears could only have dreamed of achieving. Why, my great-grandpappy had to wait whole weeks for his angry musings about the Renfrew Creamery Kings to travel across town by word of mouth, neighbour to neighbour, by which time they’d morphed into a recipe for apple pie.

Today, it’s no longer, “What have you done for me lately?” The question is: “What are you doing for me currently?” So get ready to hear the phrase “I know it’s early but…” an awful lot during the coming weeks.

Here, let me get the ball rolling: I know it’s early but after two nights, I am in first place in a couple of my fantasy hockey pools, winning widespread admiration from men* and gazes of intense sexual longing from women**.

** The lady at Subway kinda winked (possibly a tic).

FILED UNDER: Inside the NHL NHL The Five Hole