The Five Hole: Wait, so people DON’T like ‘snoozer hockey’?? 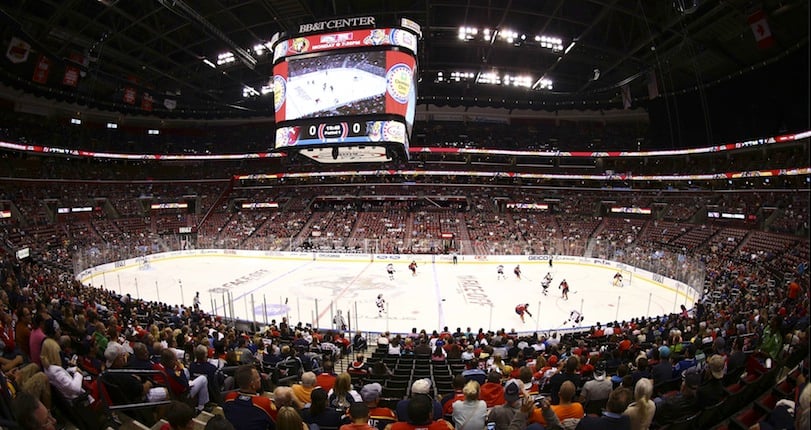 In this image made with a fisheye lens, Florida Panthers hockey fans watch action against the Devils during the first period of a NHL hockey game in Sunrise, Fla., on Saturday. On Monday they played Ottawa in front of the smallest crowd — ever. (J Pat Carter/AP Photo)

1. Way to ruin everything, Florida Panthers. Just a couple days ago, Gary Bettman was going on about how “the 30 franchises have never been healthier… never been more stable” – and then you go out and attract your smallest crowd ever for Monday’s game against Ottawa. Officially, the attendance at BB&T Center was 7,311. But if you saw the rink on TV, you’d have little choice but to assume that unofficially the attendance was: Dave.

What’s the matter, people of Florida – not seduced by the Senators’ patented “Guys, the Neutral Zone is Fun, Let’s Stay Here Forever!” playing style? Your loss, suckers, because you just missed out on a 1-0 game that was described as “listless,” “not the prettiest, “snoozer hockey” and “if there had been a crowd, both teams would have taken the crowd out of this one.” SENATORSFEVERCATCHIT!!

2. Following the game, the Panthers put this out on their official Twitter feed: “Loyalty is best earned on the back of virtue, honor and integrity. Together, we climb. Thanks to all who came.” Pretty classy and highbrow, it must be said. Give them 10 more games like this and watch for subtle changes in the tone of their tweets: “Loyalty is best earned in another, better city that doesn’t suck. Also, JIMMY BUFFETT IS OVERRATED.”

3. A message to fans of the Buffalo Sabres, who have started the season with three straight losses in which they’ve been outscored 14-4 and outshot 131-57: I encourage you all to remember that the season is not a sprint – it is a marathon. The metaphor is especially apt in this case, in that Buffalo’s 2014-15 “marathon” will almost certainly leave anyone who watches this team physically devastated, emotionally shattered and with only intermittent control of their bowels.

4a. Hey, check it out: there’s another new owner of the Arizona Coyotes. Is it you? It definitely could be so check your Visa statement. It’s bound to be your turn sooner or later. But apparently this time it’s a guy named Andrew Barroway, whose arrival will apparently “strengthen the franchise’s ties to Arizona.” That’s terrific news for all the team’s fan! Once again, the Coyotes have proved to be a go-to investment for billionaires who were otherwise going to just push their money off a cliff.

4b. The deal – in which Barroway will assume a majority ownership stake in the Coyotes for what we can assume is a bucket of pennies and a half-eaten sandwich – prompted team president Anthony LeBlanc to proudly declare: “This franchise isn’t going anywhere!” Let’s pause and wonder how long it took for him to later realize this statement could be read two ways.

5a. The people who run the Coyotes have always been weirdly hostile to critics who point to “facts,” “financial statements” and “all those vultures circling overhead” by way of questioning the long-term viability of hockey in the desert. LeBlanc, for instance, was quoted over the weekend as saying the team is “here to stay… I hope people will listen to that and it will stop the nauseating conversation.”

The nauseating conversation? Dude, your team is routinely dead last in average attendance despite the fact that tickets for next week’s game against Nashville can be had on StubHub for slightly more than a Subway foot-long.

As for Barroway, he’s a hedge fund manager who previously tried to buy the Devils and Islanders. He was thwarted twice but you know the old saying: third time’s the fleeting and ultimately hollow form of triumph that you’ll inevitably come to regret because, really, the Coyotes?

5b. LeBlanc, the team president, said he expects the Coyotes to start turning a profit next year. This is the rare joke that is both the setup and the punch line.