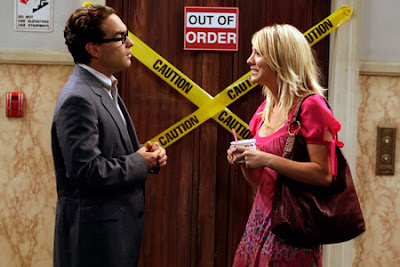 You may have heard that next season’s Big Bang Theory will feature Leonard (remember him?) and Penny “pursuing a relationship,” which could mean anything from three episodes to a full season. (Big Bang seems to have a habit of making announcements that don’t completely pan out; remember the announcement about this time last year that Sara Gilbert would be a semi-regular in the second season?)

What interests me more is the habit some shows have of clinging to the remnants of their original premise, even when that premise has become irrelevant. Leonard/Penny thing has never worked, but it’s been in the show since the pilot and the writers can’t quite give up on the idea that it’s an important aspect of the show, even though Leonard’s relationship angst continues to provide most of the weakest moments. This is the flipside of the idea that shows often abandon their original concepts: sometimes a show, even a successful one, will keep on trying to milk the original concept even after the audience has moved on. It doesn’t bode particuarly well for hopes that BBT will make the leap from “good” to “great” in its third season.

While I’m on the subject of BBT, the show’s lukewarm Emmy reception — Jim Parsons got nominated, of course, but hardly anyone else did — is interesting because it is sort of a reality-check to the idea that traditional sitcoms are on their way back, at least in terms of the prestige/admiration they get from the industry. BBT is pretty well-respected by insiders, but in a strange reversal for a Chuck Lorre show, it may actually be more popular with critics (particularly younger critics to whom the stripped-down, minimalist storytelling comes as a refreshing change from over-plotted single-camera shows) than with insiders. Penny’s actress, Kaley Cuoco, was probably the most unfortunate Emmy omission; since the Sheldon/Penny relationship is at the heart of what makes the show work, she deserves recognition almost as much as Parsons does, and the very fact that she’s created a likable, reasonably intelligent female character on a Lorre show is achievement enough.