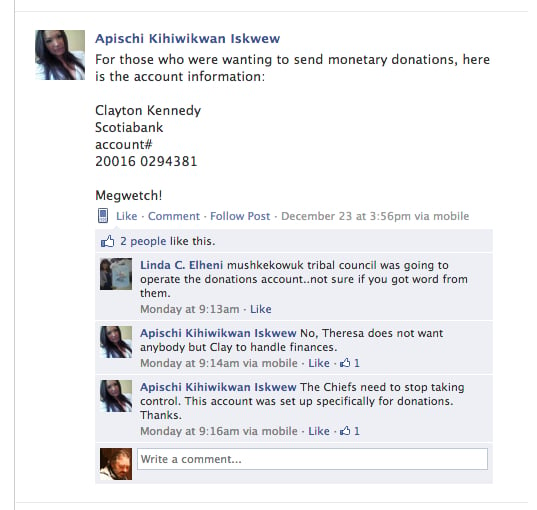 The hunger strike is just about the most morally serious activity a protester can undertake. The medical profession has given a lot of thought to the “rules” of hunger strikes, which are usually undertaken by imprisoned persons. The experts pay particularly close attention to those in which the striker explicitly expresses the intention of fasting till death unless her demands are met, which is the case with Chief Spence. In such an instance, it’s impossible to predict when the striker will lose the power to make a free choice as she gets sicker. Her intentions must be clear, the chain of decision-making authority must be explicit and undivided, and there must be no suggestion of undue influence from advisers and friends.

For a hunger striker to appeal for personal funds—in this case, for contributions to a bank account that has her boyfriend’s name on it—distorts the perceived integrity of the enterprise and throws its basis into doubt. Supporters of the hunger strike are placed in the position of mere financial promoters, no matter how intensely they leer at the striking individual. To make matters worse, we’ve been confronted with a visible disagreement between two spokesmen for Chief Spence. The only source of personal statements from the chief is her Twitter feed, and she does not even appear to have complete control of that. Does she have a single designated spokesperson to exercise authority in the event she falls unconscious or becomes otherwise unable to communicate? Who is it? Is she taking the advice of a physician and having her health monitored? This is an important issue if she intends to forestall permanent physical harm in the hope that her demands will actually be met at some point.

Of course, if the demands aren’t in earnest and the whole thing is no more than a publicity ploy, there is no danger to the Chief and we can ignore the theatrics. In the meantime, give till it hurts, I guess?