The Innocence of Muslims and the dirty conscience of Ron Banerjee 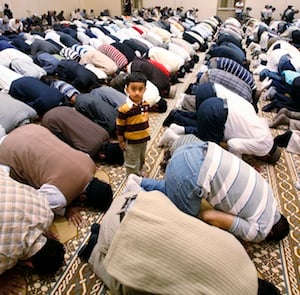 Remember when I wrote about Ron Banerjee, the proud and out bigot heading the Canadian Hindu Advocacy? Well, he’s back in the news again, not for protesting middle schools, or walking his dog around a Mosque in the name of freedom, but for declaring that he is going to screen that awful movie (not awfully offensive, just plain awful) right here at home. Why? “To promote tolerance of different ideas and different viewpoints within Canada”.

Here are some of Banerjee’s own “viewpoints”, in case you’ve forgotten.

“In its entire history, Islam, the Islamic civilization, has invented and has contributed less to human advancement than a pack of donkeys. That’s the truth.”

And according to a blogger who was at one of his TDSB protests:

“How do you know when a Muslim is lying? When his lips are moving.”

I understand why the media gives Banerjee the attention he craves. He has an almost religious obsession with hating on Muslim people (kind of reminds me of closeted anti-gay Republicans… maybe Banerjee is secretly Muslim?) And hate-mongering wackos make for good headlines.

But if you’re going to write up Ron Banerjee in the National Post or the Toronto Star, at least give us some context (his crush on Geert Wilders maybe??), so that we don’t assume by accident that he’s your everyday defender of free speech. He’s not. He’s a bigoted sh-t disturber whose only conception of free speech is slandering Muslims freely.