Private members’ bills are having a moment in Ottawa—at least, if you’re a Conservative MP 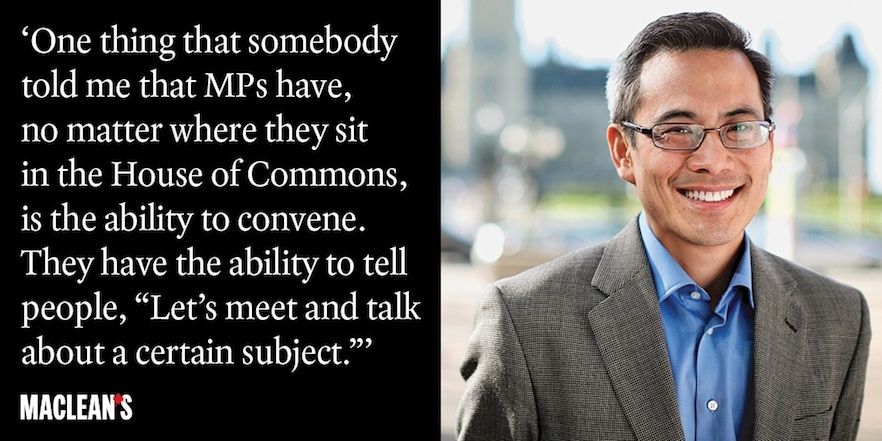 On Nov. 18 in Ottawa, Maclean’s will hand out the Parliamentarian of the Year Awards. Before we do, we’d like to have a frank talk—here and at Macleans.ca—about the work and worth of an MP. This week: the golden age of private members’ bills.

Last spring, Government House leader Peter Van Loan heralded a sort of golden era for private members’ business. A record number of bills sponsored by backbench MPs were being passed through Parliament. “This is an unprecedented level of individual members of Parliament coming forward and passing ideas that are very important to their constituents,” Van Loan said. That 20 substantive private members’ bills originating in the House of Commons have received royal assent in the first three years of the 41st Parliament is impressive. But that tally requires some clarification. Eighteen of those 20 bills were tabled by Conservative MPs. And half of those bills dealt with justice issues.

So if you’re a backbench Conservative MP, particularly one who wants to get still tougher on crime, you do now enjoy a decent chance of seeing your bill become law. But if we are witnessing an important moment for private members’ business, it might have as much to do with the bills that haven’t passed as much as the bills that have.

Later this fall, for instance, the House of Commons will debate Bill C-626, an act to amend the Statistics Act. Tabled by Liberal MP Ted Hsu, C-626 would change the way the chief statistician is appointed and require the use of a long-form census questionnaire (or an alternative that ensures the same quality and consistency of data). The bill would seem to have almost no chance of passing—at least, so long as the Conservatives remain opposed to a mandatory long-form census. But, for an hour this fall and an hour in the spring—private members’ bills and motions receive two one-hour debates at second reading—the House of Commons will debate Hsu’s proposal and, inevitably, the government’s cancellation of the long-form census. And, after that second hour, MPs will have to vote on the issue.

Changes were made to parliamentary procedure a decade ago so that each MP—excluding ministers and parliamentary secretaries—might put a bill before Parliament during a term. And, while the odds of passage remain long, the bills tabled by MPs over the last few years have created an eclectic agenda for national debate. The current Parliament has debated bills that would have banned the importation of shark fins, created an air passengers’ bill of rights, and limited an MP’s ability to change parties. NDP MP Randall Garrison succeeded in getting a bill on transgendered rights through the House (it has stalled in the Senate) and Conservative MP Steven Fletcher has tabled two bills on doctor-assisted suicide.

The precise amount of freedom enjoyed by MPs to do, say and vote as they please on private members’ business is a matter of some debate. But it is at least true that votes on private members’ bills differ from votes on government bills and opposition party motions in one obvious way: They do not always break along party lines. Conservative MP Maurice Vellacott’s bill on “equal parenting” split the Conservative caucus, and NDP MP Alex Atamanenko then split the NDP caucus with a bill to prohibit the transfer of horses from one province to another for slaughter and human consumption. Private members’ bills are thus the subject of the most interesting votes in Parliament, and a rare occasion for MPs to reach out to each other across party lines: in both ways, the sort of behaviour we might want to see from our elected representatives. Even while there are concerns about the level of scrutiny applied to some of the bills, private members’ business is the liveliest part of Parliament’s life. “It’s one of the only ways that the parliamentary tradition and principle persists—that all members are equal,” says Elizabeth May, the Green MP who has sponsored a bill to create a federal plan to deal with Lyme disease.

Hsu says he’d be happy to have the government simply copy his bill and implement it themselves. For now, with the 2016 census approaching, he is prepared with counter-arguments for Conservative objections and looking ahead to a full public airing of the issue. “I’ll certainly listen to the Conservative speeches, and then I can write articles and blogs and go point by point and address what the Conservatives are saying and force them to respond, hopefully,” he says. “And I think making that national conversation happen can be helpful.”

FILED UNDER: Inside Ottawa Parliamentarians of the year