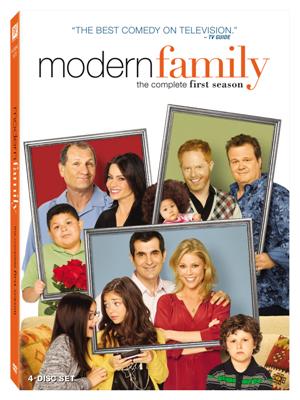 Of the TV posts I did this past season, none got more angry comments than the one where I called Modern Family “good, not great,” and compared it to Wings (which the creators worked on) in terms of quality. (I still feel this way, though comparison to Wings is not an insult. But like many of the shows Steven Levitan has done in the last decade — shows ranging from Greg the Bunny to that Pamela Anderson thing — everything about it continues to strike me as calculated within an inch of its life, with every joke and heartwarming moment feeling carefully polished.)  But I was actually glad to see the heated reactions, because that  is, anecdotally, a good sign for the show and its ability to sustain its success. Even though it’s a light family comedy, people feel passionately about it, and are committed to following the characters. A show can’t survive in this day and age if its followers only like it in a casual, disposable kind of way. Modern Family gets love, not just “like,” which is one of the reasons why it hit bigger than most shows last season.

Anyways, as an alternative to my sniping, The Surf Report transcribes a Q&A with the writers of the show — though not co-creator Chris Lloyd — about their approach to writing, incorporating real things and real stories into the show. The fact that it does incorporate stuff that feels real, however un-real it winds up becoming in execution, may account for some of the love it inspires: shows often hit when a portion of the audience recognizes itself in the stories. Like The Cosby Show, it’s about affluent people, but incorporates stories that come from actual family experiences. That leads viewers to say the two things that help a show: 1) “That reminds me of me” and 2) “I have lived that story but I haven’t seen it on TV before.” And that kind of recognition can make up for a lot of telegraphed jokes and familiar character types.

I was also pleased to read that the Emmy-overlooked Ed O’Neill “nails it in one take — because he doesn’t want to do more than one take.” If I didn’t love the guy already, the fact that he wants to just do it and not fuss over it would make me love him. And, again, an advantage that a documentary-style show has over your more movie-style shows is that they can do things fast and not have to worry about preserving a beautiful cinematic quality. It’s not in the transcript but I’m told one other thing Levitan said is that they can almost always use the best, funniest take of a line, because any flaws in shooting can be chalked up to its being a documentary. In a show that’s filmed like a movie, the funniest take isn’t always one that is up to the visual standard that the show has set for itself.

Update: Speaking of Levitan, he said today that if it were up to him, Modern Family would not be available online, though it’s not up to him and ABC shows no sign of agreeing with him:

Noting there’s roughly 2 million people watching “Modern Family” online whose viewership is not fully monetized Levitan said that, in theory, those viewers could be watching the show on regular ad-supported TV.

“I’ve asked very specifically to use our show for a test market,” Levitan said. “Were making it far too easy to watch it on other mediums and not getting proper credit for it. If we weren’t on Hulu and ABC.com, why don’t we try that? … I’ve actively lobbied to look at the big picture.”

Between online viewership and DVR viewing, he said, “we could be a Top 3 show if you add all that in.”

The idea that online viewing detracts from on-TV viewing (and therefore ratings) isn’t a crazy one, though it does seem to be based on an idea of viewership as a zero-sum game: i.e. that all it does is take people away from the first-time broadcasts, rather than driving them to those same broadcasts. People who use the internet a lot may discover some shows online, but once they’ve gotten into them, the popularity of discussing new episodes online in real time (on Facebook and Twitter and such) creates a very real incentive to watch episodes as soon as they air.