Welcome to the Monday Mailbag on Tuesday on Wednesday, where you might think having an extra day to work on this mailbag would result in answers far more clever and insightful than ever before, but sadly no.

As ever, these are actual questions actually submitted by actual readers.

Scott: Will you marry me? Despite the Obama victory, I want Canadian citizenship. I can cook, bake, sew, and name all the Canadian provinces and territories. Even more importantly, I am in no way related to anyone who has ever lived in Arkansas. Thanks! – Alison, Washington, DC

Thank you for your proposal of marriage. As the tears of joy rise to my eyes, as a smile breaks across my face and I prepare to give my response, I am mindful of having watched enough television in my life to know that true love (the kind of love that can only be measured through increased ratings and a meaningful percentage of subsidiary global merchandising rights – you know, American love) is unlikely to come to fruition without me first suffering from amnesia, being shot by a mysterious, off-camera assailant and “accidentally” impregnating your conniving twin sister.

All of which is my way of saying, dear Alison, my way of saying to you, in response to your proposal of marriage – oh dear sweet Alison! – that I would be truly honoured and deeply blessed to take your hand in holy matrim… [blink theatrically, touch head] uhh, who are you? WHO AM I?? [rip off shirt] WHAT IS THIS THING ON MY BODY?????

Scott – this rumoured coalition business has me all confused. I mean, Whitney denies vehemently that she has rekindled her, er, “romance” with Bobby. Is this true?  – Mark

You disgust me. How can you even ask such a superficial and gossipy question when we at home are in time of unprecedented uncertainly, a time a growing crisis, a time of coming to grips with the fact that the status quo is completely and totally under attack. That’s right, Mark – Brad Pitt has grown a moustache: 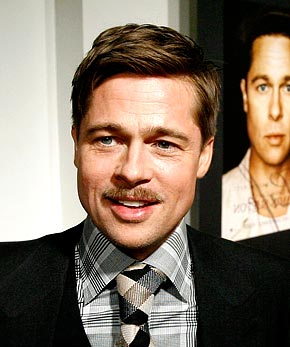 It’s in your hands, Governor-General.

Dear Scott: Recently, I’ve been contemplating forming a ménage à trois with two other men, let’s call them Jack and Gilles. The only problem is that Jack has a visceral loathing for my extended family, and Gilles thinks I “sold out” to the Man years ago. Also he’s an ex-Maoist. And also my best friends have sworn to destroy me. Question: if we do go through with it, what calibre of semi-automatic pistol should I carry around with me at all times? Sincerely, “Stéphane,” Ottawa – Jack Mitchell

First of all, let me go on record as saying: I always knew you were a winner! Never doubted it for a moment. [Place finger between neck and shirt collar. Tug.]

I don’t think you have anything to worry about, Stéphane. My own personal understanding is that most threesomes go off without a hitch. There are never any lingering hurt feelings. There is never any ensuing awkwardness or recriminations, regrets or jealousy. As for what actually happens to the three people after the initial excitement, I have no idea: I usually fast forward through that part.

Scott: More of a work relationship question for you. My boss keeps insisting that it’s inappropriate for me to call him a dumbass everytime he mentions what a smart economist Stephen Harper is. I on the other hand don’t believe it’s inappropriate because… well, that makes him a dumbass correct? Other than taping his mouth shut or hitting him over the head multiple times (I believe he must have head previous brain injuries which lead to his current train of thought so I don’t think that would help) what can I do to help him see the error in his ways? Please keep in mind this man also keeps a picture of George W. Bush above the dining room table. I’ve tried to use other words instead of dumbass but apparently they are deemed offensive as well. I’m at my wits end. – Mytwocents

I cannot effectively answer your query without first learning more about your boss. What kind of a boss is he? It is my belief that there are only 10 types of bosses in the entire world, and each of them resembles a character from Star Trek.

Is your boss a Kirk? If so, he is probably suffering from space syphilis, and cannot be held responsible for his words, thoughts or actions. Just do yourself a favour and don’t wear a red shirt to work. Things rarely end happily for red-shirted subordinates when a Kirk is involved.

Or is your boss a Spock? – like the Vulcan played by Leonard Nimoy, the actor who, during the filming of Star Trek VI, was eaten by William Shatner during a tragic overacting mishap. If so, your repeated use of the word “dumbass” will never penetrate his icy, ruthlessly logical heart. This means you’ll probably have to kick him in the nuts instead. Vulcans have nuts, right? Yes, two vulnerable, pointy nuts.

But my initial assessment – given the description your provide – is that your boss may be a Tribble: a small hairy creature that, apart from making the occasional squeak, does absolutely nothing but reproduce, growing in number at a staggering rate. (In other words, he’s middle management.) Get rid of one and two more appear. Go out to lunch and by the time you come back the office is waist-deep in them. They’re… everywhere.

Scotty got rid of all the Tribbles on the Enterprise by surreptitiously beaming them aboard a Klingon vessel. Until technology empowers you to do the same to your Tribble, you’re probably best to try to avoid yours. Hitting it is useless. Scolding it for its beliefs is useless. It doesn’t know any better. If all else fails, just pet it. There, there, you’re a good little Tribble, yes you are! Yes you are!

Scott: You’ve raised just the question I need answered: “Need help getting the other person in your relationship out of your relationship?’” I’ve tried dropping hints at her — nothing. For her last birthday I got her a set of luggage, but no reaction, nada. – Kevin

From my experience as a person who’s been in literally dozens of relationships (five if you don’t count “Cabbage Patch” relationships), the key to ending a fling is to use clear, polite and effective communication, right up to the moment you throw the smoke bomb to obscure the method of your escape. Take it from me: it’s effective and theatrical.

The gift of luggage, alas, does not send a clear message. Nor does it appear capable of emitting a thick curtain of sight-diminishing grey smoke. Given the gift of luggage, the recipient could infer that you intend to take her on an exotic vacation or, worse, that you’ll soon be purchasing her a gorilla to pounce on the suitcases in a graphic attempt to demonstrate their durability. Raising a gorilla is a pretty big commitment. And now you can’t even put it on a plane and take it back to the zoo because, look, your luggage is ruined.

Why don’t you try skywriting? In these high-tech times, skywriting has fallen out of favour as a means of message conveyance – but it really can’t be beat as a way of getting your point across, especially if your significant other has a name comprised of three or fewer letters. Otherwise, it gets cost prohibitive pretty quickly.

Take your girlfriend to a meadow. Hold her hand. Watch the anticipation on her face and the pilot begins to spell out the first letters of your heartfelt message of not wanting to see her ever again. When he gets to the word “tramp,” that’s when you throw the smoke bomb.

Scott. I know this question has been on everyone’s minds but are too afraid to ask. … If you could have dinner with three people, dead or alive, who would they be and why? – Rachel

On the positive side, yes, his presence would help keep costs down. Oh, darn, we’re out of wine and bread and – whoa, no we’re not! And look – now we’ve got thousands of fish for dessert. Thanks, Jesus! I mean, don’t worry about the mess or the smell or anything. But wow, cool, fish. [Long pause.] Fish everywhere. [Doorbell rings.] I wonder who that could – oh, hi lepers. Jesus, it’s for you!

Let’s be honest – Jesus is great and tall and everything but this is supposed to be MY dinner and there’s Jesus Christ hogging the limelight with his stories of dying for our sins and pioneering the sandals-without-socks look. I probably wouldn’t even be able to get a word in edgewise with my other guests – Ace Frehley and Batman.

The key to a successful imaginary dinner that will never happen but is somehow supposed to be revealing of your character is to not overreach. You want a trio of guests who are less interesting and successful than yourself so YOU can be the centre of attention. So to answer your question, Rachel, I’d invite Hanson.